We added the first day of Fall to our classroom calendar today, but I was still clinging to the illusion that it would be summer until next week. Not so much!

Tonight is our second night back at club volleyball, and assuming N makes the team again I'll be spending two nights a week in St. Louis for his practices. Since Grant's Trail is near the practice site, it's a prime opportunity for me to fit in some running or (if I ever get ambitious enough to get my bike loaded up) riding. I dropped N off at practice and headed to the trail.

It was about 7 when I got there, and the sky had it's share of clouds. Now, I run in the dark all the time -- in my neighborhood, not on the trails -- but I rationalized that it wasn't really dark so much as overcast. It was a beautiful, cool evening, perfect for running, and I had plenty of time to get out there. How could I skip it? Especially when I'm still dragging from yesterday's 4 a.m. wake-up call and late night at the Cardinals game.

I had two miles on the schedule, but i felt good and decided to run 3. The first 1.8 miles were nice. I was feeling good, taking it easy, and passing the shadiest (darkest) portion of the trail while it was still fairly light. The trail wasn't nearly as busy as normal, but there were several walkers and cyclists. At that point, I made a quick bathroom stop, and when I came out it was practically dark.

I'm not a nervous or timid person overall, but I DO NOT like being a woman alone on a dark trail. This one has parts that pass right behind a residential area, and that part wasn't bad. The parts that were more secluded really creeped me out, to be honest. On the positive side, though, they probably boosted my pace.

So, tonight's run was 3 miles in 28:54 (9:37 pace)...AND a reminder that those long summer evenings are pretty much over. Goodbye (and good riddance) humidity, hello early sunset! 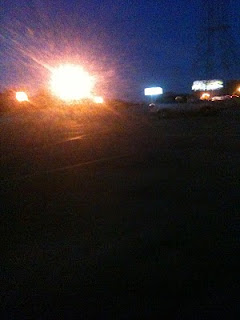