Getting schooled: a learning experinece

*Unless otherwise noted, all pictures are by my friend Robin's husband.  Soon you'll be able to read her race report on her blog.*

I'm beginning to think that one of my athletic hallmarks is not being smart enough to know better.  For someone who's as timid as I am with things like speed, terrain, corners, hills, not to mention new things in general, my impulsivity is prone to signing up for things that my ability isn't up to pulling off.  I'm bolder in theory than in fact, and so it was that I ended up riding in the Edwardsville Rotary Criterium on Sunday.

In a criterium, or "crit", riders ride laps for a certain amount of time + a certain amount of laps.  It's a great spectator race because participants keep passing by as they ride their laps.  While none of my family was there, I had some tri club friends in my race, some cheering while they waited for their races, and a couple of friends who came to watch, and it was awesome to hear them cheering for me each time I rode past (though I did get yelled at for looking over and smiling when I heard them. :D).  To do well in a crit, you need to have some skill at strategizing, pack riding, and cornering.  In this crit, you really need to like corners.

﻿﻿You might remember me mentioning that I went to a crit practice the day after falling off my mountain bike.  We rode 1-mile laps on a loop course, and I got much more comfortable taking turns faster.  Taking left turns faster.

So, yeah...that's a lot of right turns up there.  Awesome.  I started my warm-up early by riding to the race.  We'd had the bike rack off my car for our camping (or, according to some, "camping") trip, and it was faster to just ride there than to mess with the rack and then have to possibly look for a parking spot.  Once I was there, the learning started.

When I picked up my race number, the guy told me to pin it on my right side, so I did.  As I was standing under the club tent waiting for a little bit before going out to warm up, a girl rode up and told me, "Your number's on wrong." I had pinned my number on like I would for a running race (horizontally), just on my right side.  Instead, you're supposed to pin it on vertically, so the officials can read it when you're bent over your bike.  Here, I made you a little illustration to show what I mean: 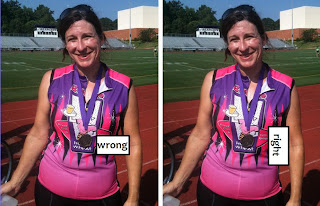 This is a great illustration because it even shows the jersey I was wearing yesterday, and if you race bikes you probably already know what my next lesson was going to be.  I, however, was happily ignorant and got onto my bike to ride some warm-up laps.  I had been riding for a while with my friends Robin and Judy, getting a feel for the course, looking for spots I wanted to avoid, and practicing those right turns when the same girl rode up again and told me, "You can't wear a sleeveless jersey in a race."

If I had really thought about this, I knew it because after she said that, I remembered reading something in one of Robin's past blogs about her having to do something with sleeves after having the same issue in a race.  I hadn't thought about it, though, and remember I rode to the race.  I didn't have any extra shirts or jerseys along with me, and my only kid at home has no driver's license.  Robin thought maybe one of the tri club guys had an extra jersey I could borrow, but he was in a meeting.

Since I still had 45 minutes before race time (actually, considerably more as it turned out), I decided I'd just ride home and get my one sleeved jersey (affectionately known as my falling jersey since the only time I wear it is when I feel like there's a good chance of me falling).  Luckily, when I stopped by the club tent to grab something, Wade was there and had an extra jersey I could borrow.  That was a relief.  I did a quick chance and got my number pinned on for the third time and went out to ride again.

Judy and Robin were at a different spot on the course, and I ended up riding by the girl who'd told me about my number and the whole sleeveless jersey thing.  She said something about not wanting to act like the bike police, and I thanked her.  I'd much rather be told I'm doing something wrong when I have time to fix it, and that's one mistake I won't be making again.  We rode a few laps around the course and talked a little, and she gave me some helpful hints about cornering.

Finally, it was almost 10:00.  Wade sent me off with a cheerful, "Don't get tangled up, fall, and rip my jersey", and the ladies gathered near the start line to wait.  And wait.  And wait.  The start/finish line, which wasn't up yet, caused quite a bit of delay as they struggled to raise it.  We probably had to wait for 15-20 minutes before our race finally started.  I was riding in the Women's Cat 4 race, which was 15 minutes plus 5 laps.  That didn't sound like much riding for the $30 registration plus $10 one day racing license, but it turned out to be plenty.  There were 8 women plus 12 or 13 juniors who started a few seconds after us.

We were all lined up across the street, and I got a slow start after the whistle blew because I wobbled a little taking off and was nervous about riding close to other people.  I was nervous again coming into that first turn not knowing how people would hold their line (and hoping I would OK) and was at the very back of the pack after the first turn.  By the time the second and third turns were past, I had dropped off the end of the pack and was riding on my own.  If you want to see what the course looked like from in the pack, check out Robin's blog for her helmet cam view of the race.

Well, mostly on my own.  The kid you see in the pictures above and below was riding in the juniors race and spent a lot of time on my wheel.  I wasn't too sure what to do there.  I knew I was making it easier for him and that it would be easier for me if I was behind him, so what do I do? Keep riding? Or pull off and let him go through and do some work? Some of my friends told me later that his dad was yelling to him to not be in front.  I guess with more experience I'll have a better idea of what to do.  Strategy has never been my strong suit in, well, anything. There was a huge gap between me and the other riders.  It was kind of depressing to see how much slower I was than everyone else, but I didn't really have time to think about it because I was just focusing on trying to ride hard and do as well as I could.  I'm faster on the corners than I have been in the past, but that's not saying much...and I got called out later for braking on the corner in the picture below (which I didn't remember doing though I believe it, and I know I did a little braking on some of the others).  All I can say is, I'm working on it.
Now, I didn't do myself any favors with my training/preparation for this race.  It basically consisted of one crit practice, not riding my road bike for a week and a half before the race, and running nine miles the day before.  Up until going camping, I had been logging some decent miles each week, but mostly just with a focus of riding rather than riding fast.  While I'm faster than I was on my old bike, I'm a lot slower than other people, especially when I creep through corners like I need a Boy Scout to help me cross the street. In the end, I was pretty sure I was last by a comfortable margin.  Robin thought I'd finished ahead of one girl because she said she'd lapped her and never lapped me, but I don't know.  All I know is that I was waaaay behind the main group.  To be honest, it stings.  I'm trying not to let it bother me too much.  After all, this was my first crit, and I didn't crash or make anyone else crash.  I went out and tried something new, something that played to none of my strengths.  Well, I'm not sure what my strengths are, so I'll say something that highlights many of my weaknesses.  I definitely learned a lot, and if that education came by way of making mistakes and looking dumb, those are lessons that I won't forget any time soon.
Labels: edwardsville criterium lessons Losing