My summer is fast seeping away; in fact, I've spent the past two days in optional inservices with one more to go tomorrow, but I've tried to cram as much into the last bit as possible.

There was last Thursday's mountain bike ride with my friend Theresa, when we had a great 5ish mile ride before I got a flat tire.  No problem, I had everything to fix it...back in my car a couple miles away. :-/

Friday I ran 4 really unpleasant miles, and the only bright spot there was the hope that I was getting my bad run out of the way.  And then there was Saturday's 8 mile run, where I focused on just running nice and easy and was logging 11:xx minute miles for the first half.  At the midpoint, I decided to try running nice and easy just a little faster. Much better.

It's encouraging to be at 8 miles and not limping. Hopefully slowly, steadily building mileage will keep my hip happy. I didn't feel great when I finished, but I felt good.  Good enough to run another 6 miles the next day on the trails at Castlewood.  Man, I love those trails. :)

Monday we set out on another bicycling adventure to fulfill the last "unplugged" activity we had left to do: mini golf! 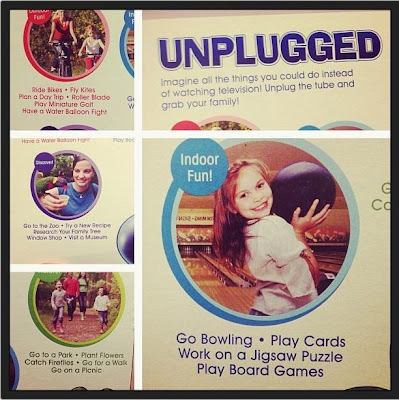 The nearest miniature golf course is at a little fun park 7.5 miles away, so Jacob, Nathan, and I rode bikes to get there.

It was hot, and big brothers can be annoying, so there was at least one minor meltdown on the way.  To add to the fun, Nathan's handlebars were super loose.  Luckily, I have just the bike tool for that.  Unluckily...it was back on the counter.  Doh!

Once we were safely at the golf course, mini golf was fun for the first couple holes until Jacob kept struggling. It was fun again once we stopped keeping score.  The ride back had its challenges as Jacob started getting uncomfortable on his bike seat by the time we were at the 10 mile mark; luckily, he and Jeff were going to St. Louis Rams training camp, so he got an early pickup.

Since Tuesday was my last day home this week, I wanted to make sure we did something fun together.  I asked Jacob if he wanted to ride to the park here in town, but he wanted to go to the park we'd passed through on our way to go golfing.  "Um...that's a 7.5 mile ride, you know," I reminded him.

So away we went for the second straight day.  As "fun" as the previous day had been between bickering brothers and saddlesore whining, I wasn't so sure what I was in for, but we had a great time.

The ride went more quickly than the previous day, and the "fights" took the form of who can ride one handed longer (Nathan), who can grab more leaves from overhanging branches, who can spit further, and who can pass whom.  As much as Jacob gets irritated by his brothers, he sure likes to copy what they do.

We played for about an hour at the park before turning around and heading back.  Unlike Monday's return trip, this one went smoothly.  After watching his big brother ride long stretches with no hands, Jacob started trying to as well, and before I knew it he was riding hands-free for 5-10 seconds at a time (officially -- and easily -- eclipsing me).  Distracted by his new ability, Jacob didn't even think about being uncomfortable.  He ended up the day with a total of 15.6 miles.  We celebrated his new distance PR with ice cream...the perfect treat for a hot day.

He definitely doesn't love the bike like I do.   Whether it's adventuring with friends, attempting to get through a section of singletrack without tears, admiring the surprising beauty of Kansas even as I (temporarily) vow never to ride there again, or spending time with my kids, for me, bicycling is as much about the journey as the destination.  It's as much about having done as getting there.  For Jacob, it's all about where we're going, and he's learned that I'm much more likely to say yes to an idea if a bike ride is involved.  Win - win. :)

Now we just need to figure out a time to fit in one more Katy Trail overnight this year.  I think Nathan's even signed on for this one. If only I had a little more summer to work with...
Labels: bicycling distance PR family family fun Kids miniature golf