After a noisy November on the blog, it's been quiet here this month. I've stayed active on the weekends, but I've been struggling with motivation and not finding the usual joy in things that I normally love doing (riding my bike, running in the woods, even lifting weights). Maybe it's a touch of seasonal or post-race depression, or those in combination with overdoing it in November (but what a great month!!).

Whatever the case, my running mileage since Skippo has been anemic...a grand total of 15 miles since November 9. I did get out for a couple of gravel rides and lifted weights twice a week, but my Pere Marquette race prep was pretty non-existent.  And you know what? Turns out that's the way I like it. Mentally I'm just better off going into a race unprepared and hoping not to die.

Race morning is always fun, driving up the River Road and then hanging out at the beautiful park lodge, visiting with friends and meeting new people.  I think four separate people mentioned reading my blog, which was really cool. Also cool? When my friend Mary was super excited to show me what she's learned from me.

Bob was doing his very first Pere Marquette race ever, and I got so distracted talking with Chuck and him that I nearly missed my wave start (which is something of a tradition for me).  I had to rush over to the start line, throwing my sweatshirt to the side as I jogged, and we lined up under the watchful eye of a bald eagle. They're prevalent along our part of the Mississippi during winter months, but I don't see them very often. The start line eagle was actually the second I'd seen that day. Very cool.

Somehow I was in wave 11, which is by far the earliest wave ever and one in which I was quite sure I didn't belong. I think it was based on my comparatively strong performance in last year's 8" of snow, when my screw shoes gave me excellent footing, a benefit that would not be repeated with this year's start temp in the high 40's.

I wished Bob good luck and resigned myself to being passed a lot.  The race starts with a deceptively flat first quarter mile before beginning the first of the four big hills.  I felt surprisingly good at the beginning, and while I was passed regularly it wasn't the constant onslaught I'd anticipated.

A week of dry weather hadn't been enough to completely dry the trails after last week's regular downpours, but the first mile (which was also the last mile of the lollipop course) was the only truly muddy section.  Later in the race I overheard a girl talking about how bad the mud was and smiled to myself, thinking that it was nothing compared to the ankle deep mud I slogged through in my first PMETR. 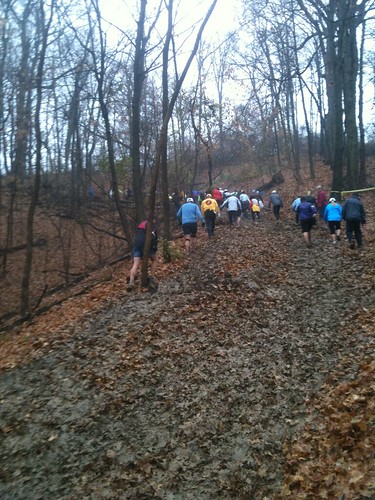 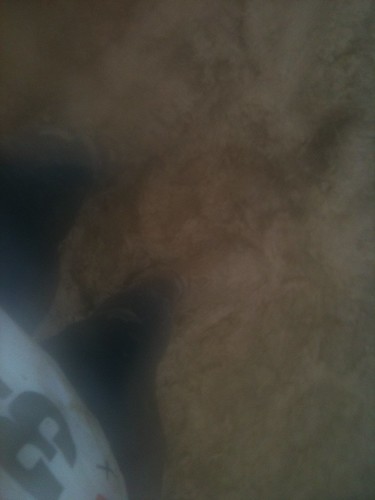 I felt surprisingly good, only having to walk the steep, muddy section approaching and after the squeeze (a narrow path between two boulders).  I felt really good when I glanced down at my Garmin near the end of my first mile and saw a pace in the high 9 minute/mile range.  Only at the end of mile 2 did I realize I'd been looking at the time rather than pace, which gave me a good laugh.

Normally when I think of Pere Marquette I remember the big uphills while forgetting everything else, but as I neared the first downhill section my left shoulder started hurting and I got a bad cramp on my right side.  This stuck around for the next few miles, slowing me down and making the downhills more painful than uphills.  I can tell that I'm getting old, because in the same way that in my 20's and 30's any nausea-type symptoms struck pregnancy fears, now anything torso-related makes me think heart attack, and I spent miles 2-4 pondering female heart attack symptoms and the nature of hypochondria.

Despite the lingering side cramp, I was having a good race. If downhills were a weak spot for me on this day, I did well for me on the uphills. More that that, I just felt at peace, enjoying the run and being in one of my favorite places, spending very little time glancing down at my watch and just moving forward.

The aid stations were filled with friends and familiar faces. At the first one, Matt saw me and called out, "She'd rather be riding her bike!"  So true.  Curiously at a race filled with people I knew, I only ran with one friend on the course and not until around mile 3.  "This isn't a hill," said a familiar voice, "so no walking!"  It was Chuck, who'd started 3 minutes behind me.  We've trained enough together this fall that I knew he'd be passing me.  It was good to have company for a while, and I kept him in sight until near mile 6 when he pulled far enough ahead that I couldn't see him anymore.

It was around mile 6 that I looked at my watch and realized that a PR was within reach. I had 20 minutes to run the last 7.8 miles (edit: duh...it was the last 1.8 miles). Now, even in my world two consecutive sub-10 miles isn't crazy fast...unless it looks like this:

Gravity's assistance was awesome. The muddy sections were less so, and my timid trip through the squishy ground before and after the squeeze did nothing to advance my PR hopes.  My friend Karen, who had also started behind me, passed me with some authority before that last downhill, and maybe it's one of my problems in races that it didn't really bother me; she's trained way more consistently than me this year and earned a better finish.


I was more tentative than I probably should have been on the last downhill section and then picked it up for that last flat quarter mile or so. The nice thing about having fast friends is that so many of them were there to cheer for me when I came into the finish.
A look at the clock and some quick math told me that I'd missed my PR by a minute. The smile on my face shows how non-crushed I was. I finished feeling good, faster than I deserved, and having enjoyed my run. That last item has been lacking over the past month and matters more to me than any PR. Having fun again is enough of a win for me.