Last year at Dirty Kanza, when it was virtually certain that I was actually going to finish the race that had eluded me the previous two years, I pedaled through the campus of Emporia State University filled with the overriding peace of one simple thought: I never have to do this again.

So why, exactly, was I on BikeReg.com at 8 a.m. Saturday morning?

I never have to do this again.  I meant it, too.

But it turns out I want to. I loved all the gravel training I did last year; the thought of a winter without DK hanging over my head was bleak. My rides are measured in comparison to the race: "Hey, we rode 75 miles...we're only halfway to the second checkpoint."

I love the scenery, which is something that's hard to explain unless you've been there.  You spend the majority of the race in the middle of nowhere, surrounded by open range, miles from the nearest house.  You're very on your own, in a way that's both intimidating and very cool. I love the ridiculousness of a race so long that, when you tell people the distance, they ask, "In how many days?"

I've met some awesome people because of and at Dirty Kanza.  Even though I'm still in touch with most of them it's not the same as being there and being part of it again.

I've known for a while that I wanted to go back, but there were things to resolve.  The first worked itself out when our vacation, originally planned to start that weekend, was rescheduled due to my nephew's baseball practice.  The bigger issue, though, was that this wasn't going to be a big Team Virtus event as in years past.

I got roped into this race because of the guys, and a big part of the fun is experiencing the weekend with my teammates.  In addition, they supply the support crew (their awesome wives and girlfriends) and figure out the details like travel and hotel reservations.  Luckily, my friend Emma said she could crew for me, and despite my aversion to responsibility I managed to get myself a hotel room before they all sold out.  Happily, Travis decided to give Kanza another go, so I won't be the only Virtusan in Emporia come May, and I'll have plenty of other teammates as well. 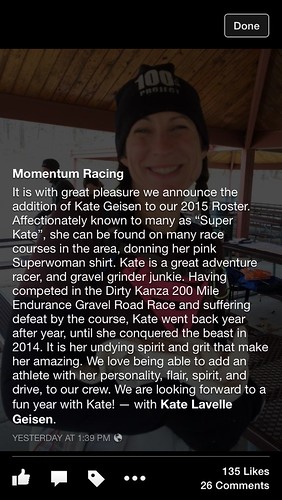 I am TV4L (Team Virtus for Life), but our geographic spread and mismatched schedules often make training together difficult, and I do a lot of races in the area without my teammates.  I'm a pretty friendly person, so that was never much of an issue until this summer at the Indian Camp Creek MTB race, when I showed up and realized that in the absence of Chuck and Lori I had no home base.

I stood there like a little lost lamb until my friend Jim/Dave told me I could put my stuff at the Momentum tent.  Even though I'd only met a few of the people there before, and I had a colossally terrible race that day, everyone was welcoming and friendly, and Laura and Mary both encouraged me to join the team.  So that was June, and it only took me 6 months to make a decision.  I'm still Team Virtus, but now I'm on Momentum, too: dual citizenship!

It's a little intimidating as a mediocre athlete to join a team, but the only major thing to change will be my jersey at bike races.  Since Mickey is one of my regular training partners and I've been on rides with a few of the other guys, there's not the same level of worry about how I'll fit it; I'm nowhere near as fast, but it's worked out fine.  And while I may be lacking in speed, I'm a darn good teammate.

I knew Mickey had his eye on a return to Dirty Kanza (and a potential repeat of his Racing the Sun victory), but it turns out Momentum is going to field a pretty strong crew at the DK start line. I believe there are 12 of us heading to Kansas in May, and only a couple have been there before. I guess that makes me the wily veteran or something. Weird.

So if you've been around this blog for a while, you know what to expect. Lots and lots of posts about bike rides, but you can look forward to a few new characters to supplement the main cast. And hey, maybe one of these days I'll finish my 2014 in review post and start something on 2015 goals before the year's half over!