Commentary by Chuck in green.

We got plenty of rain overnight, but my tent stayed dry and, if not exactly warm, tolerable. Even better, the weather cleared just in time for us to wake and pack up. All my gear made it back onto the bike with no drama, though I did switch the big tarp from my front roll to the seat bag. I'd only made the change because I'd had to keep adjusting the tarp the previous day, but later in the day I'd appreciate the extra layer of protection over my Wal-Mart dry bags.

With maybe 5 miles to go before we hit Makanda and Giant City State Park, we opted to wait to refill water. I mean, we'd probably be eating second breakfast at the coffee shop within the hour. We ate our first breakfast of gas station danishes (not nearly as good as the cinnamon roll dinner), then rolled out, foolishly optimistic that the overnight rain had fulfilled the wet weather forecast.

Chuck: Gas station danish (+1). Leftover burrito in jersey pocket (-1). We didn't bother with making a hot breakfast and doing the morning coffee ritual since the Makanda coffee shop was so close. (Spoiler alert: that asshole will never be forgiven.)

I managed to drop my chain within about three pedal strokes (thankfully that was the closest we came to a mechanical the whole trip) but caught up with Chuck almost immediately where he'd stopped to get a picture of the birds at the spillway.

Ah, the spillway. Once there I sort of remembered reading a thru-hike trip report mentioning it, but as usual my research was long on vague impressions and short on details. It was super slippery and sketchy, especially in bike shoes, and I crossed it at the pace of someone's arthritic grandma. I mean, a broken hip would put a real damper on our trip.

Speaking of damp, it started to rain again just past the spillway. We were already wearing rain jackets, so we both kind of shrugged. It was hardly the first time we've been rained on, and we were actually riding. I was afraid to say anything out loud, but I marveled to myself that we'd already ridden more than we had in the first singletrack mile the previous night.

With that happy realization, the spell was broken, and we spent most of the next three hours dragging our bikes up and down steep, eroded hillsides and over countless fallen trees.

While Chuck had managed to organize his gear to avoid carrying a backpack, I'd done no such thing. I'd gone #accidentallyultralight and my last-minute packing meant my setup wasn't exactly dialed, but knowing the high probability of hike-a-bike, I hadn't worried about getting all the weight off my back, anyway. Every pound stashed on the bike was another pound I'd be lifting over trees or pushing uphill.

Chuck: It is always my goal to bikepack without carrying a backpack, but this trip would have been better with one. Obviously I still have lots to learn about gear optimization.

Kate: On the other hand, you had all your gear, so there's that...

After a while I stopped taking pictures because I felt like I was only taking pictures of shitty places on the trail and getting my phone wet in the process, but it wasn't all bad. Some of it was magical.

Not long after we got to ride (ride!!) though the pines, a trail marker very clearly directed us straight ahead to nothing. The trail just disappeared. We backtracked and checked our location on GPS, then retraced our steps to where we'd lost the trail.

We'd crossed some doubletrack that looked like it could be a shortcut and I was ready to take the (potentially) easy way out, but Chuck was certain we could find the trail (and maybe not certain the "shortcut" would be an improvement). Dropping our bikes, we headed in opposite directions to search; before long, I stumbled across it and we were back in business.

And by back in business I mean working together to lower our loaded bikes down washed-out trail sections and steep creek banks and through creekbeds.

Through it all, the rain continued to fall. The steep uphills warmed us up. The slower hikes down wet rocks and roots left us chilly.  And repeat until my attitude was as grim as the weather. "Why did I think this was a good idea?" I asked Chuck. "This quest to ride the whole River to River is stupid. I think it's safe to say I never need to ride any more of it."

Finally we could see an actual road ahead of us on the map. But first there was a powerline cut. 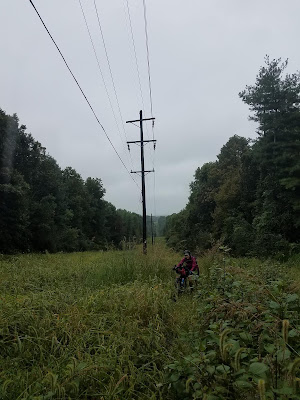 It had taken us nearly 3 hours to ride about 3 miles. Of course, that involved very little actual riding and a decent amount of route-finding. Our bikes were more like very expensive, unwieldy trekking poles, and the mere fact of having a map and GPS track doesn't eliminate the frequent need to figure out where the heck the trail just went.

In retrospect, it seems silly that I felt so beaten down by this part of the trip. I mean, it was damn hard, but I've done hard things before, and it was only three hours of my life. Maybe part of the issue was the gap between my expectations ("just a few quick miles to second breakfast!") and the more challenging reality. Regardless, I was disappointed about my missing sense of adventure.

And if I had expectations that the day was going to finally get better, well, the reality once again was a little different.

Next: recitation of woes