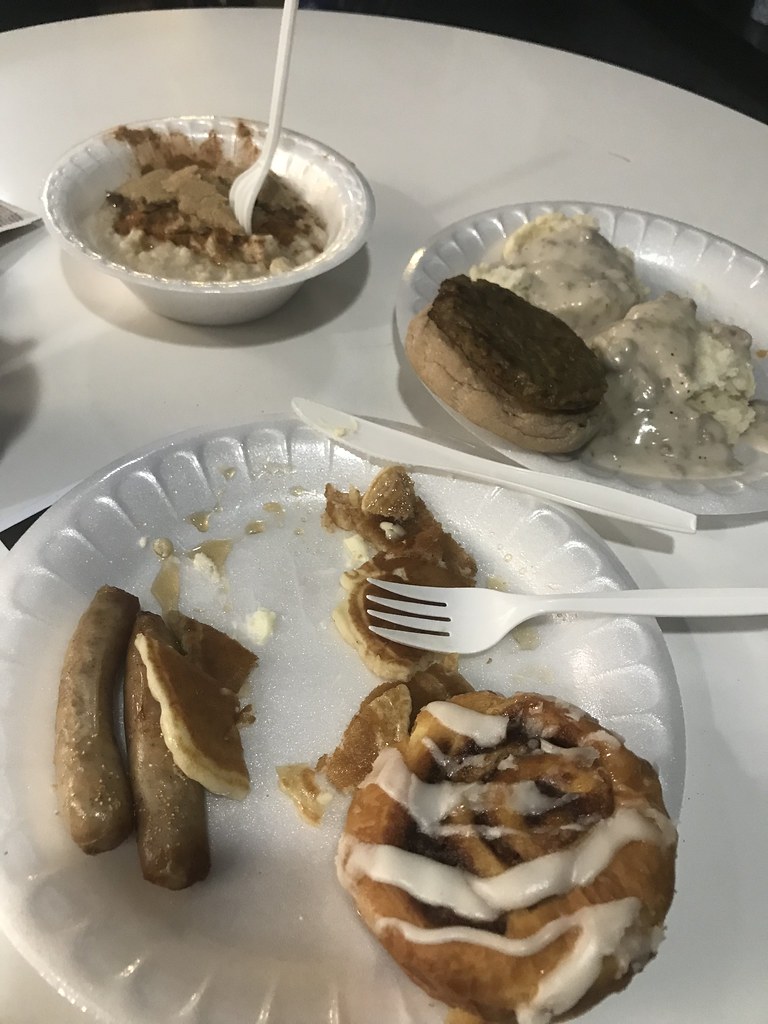 I hadn't bothered to set my alarm, but a good night's sleep didn't make me any more sure of my plans for the race. Part of me really liked the idea of a zero day, but the rest of me continued on autopilot, prepping my bike and gear as if there was no question about leaving. Then I wandered down to the breakfast room and ate so much that I basically had to get back on the bike.

But first I waited for good weather. I was about to leave when I looked out the window and saw dark clouds gathering. Though I'd surrendered to the inevitability of continuing on, I'd also promised myself a short, easy day. I laid back down  and waited for the storm to pass.

Facebook post: Enough carbs to start the day? Possibly...If you’re watching my dot and wondering why it isn’t moving, don’t worry. I’m taking advantage of the hotel to recharge my cache batteries and myself, and now that a storm is rolling in I’m going to let that pass before rolling out. Planning a relatively short day to Beaver, 40ish miles. Looks like the weather is going to get a little less friendly from here on out. Nothing I haven’t ridden in before, just need to stop being such a fragile flower about it.

I can't even count the number of times I've ridden in bad weather, and here I was hiding from the rain in June. Forget rule #9 (which I appreciate) or rule #5 (which I detest). I might have forced myself to not quit, but outside of that decision I treated myself with kid gloves. Whether I wanted to stop every 5 minutes, put in a low-mileage day, or wait out a shower, it was all good. The irony is that all the avoidance of negatives just built it up my fear of them. Getting caught in the rain would have been a good reminder that it was no big deal. After all, why else did I pack that waterproof jacket?

I finally left the hotel at 10:16, returning to the Razorback Greenway with fewer navigational issues than the previous day. I took a detour once I reached downtown Bentonville, hoping to pick up new charging cords at the Wal-Mart I remembered from a February visit. My memory didn't extend to remembering how to actually get to the store, so I pulled out my phone to check. Two miles away? That seemed wrong, but I rode a half mile or so before realizing there had to be something closer.

I wheeled my bike into the downtown Wal-mart, really more of a grocery store than anything, and set off in search of my cords, finally finding them at the registers at the front of the store. A clerk grabbed one for my iphone but couldn't find any micro USB cords. I got back on route and made my second stop of the day at a Dollar General a couple miles down the road. Finally, 6 miles and 45 minutes into the day, my errands were accomplished and I was ready to move on.

The first miles were easy, and I even intersected briefly with a group ride outside of Bentonville before turning onto the gravel. "Looks like you've been out for a while," one of the guys commented.

It was a good morning. It was warm and humid after the earlier rain, but a cool breeze and shady roads kept me comfortable. I didn't feel fast, but the riding was relatively easy. The few climbs weren't horrendous, which didn't stop me from walking at least once in Pea Ridge Military Park. Moments after I reached the top and resumed riding, a bike-laden white SUV pulled up next to me. I looked over to see the smiling faces of my DK buddy Matt, his wife, and their teenage daughter. They'd driven across the state to visit with friends and cheer me on.

Matt and his daughter, another Kate, unloaded their bikes and joined me for some miles. While I hadn't felt particularly lonely during all of my solo time, I was delighted to have their company. We'd barely started riding when Kate flatted at the bottom of a chunky downhill. Matt sent me ahead, saying he'd fix it and they'd catch up.  I rode maybe 100 feet when I decided, this is silly. I'm taking an easy day anyway...why would I ride away from my friends? I circled back and proceeded to talk their ears off.

We hadn't been riding long when another bike came towards us on the road. "We've been following the race! Which one of you is Kate?"

I gestured to the other Kate: "Both of us, actually, but I'm the one doing the race." The question made me giggle a little; I was the only one riding a loaded bike, so it seemed pretty obvious. Then again, some of the guys at the start had carried less gear than I take out for a day ride, so maybe he was right not to make any assumptions.

The man (whose name, like those of most everyone I met during the race, I promptly forgot) and his wife lived nearby and had been dot watching. She was waiting just down the road with a banana and a Gatorade, which I promptly devoured while telling them about my race so far. They asked if I was having fun.

Fun. I heard that word a lot, from people I met along the way, from my husband on the phone, and in the many, many encouraging posts from my friends. For the most part it was very much not fun. It was more like sentencing oneself to hard labor; I was the judge, guard, and inmate all in one. That's not to say that it was a bad experience, but the fun so far had been largely of the type 2 variety.

All of this, I should add, was no surprise. I'd always known that "fun" was going to come from having done the race, not so much in doing it. For the time being, the best description was challenging, rewarding, and deeply satisfying. What does it feel like to live out one of your dreams? Really fucking hard.

Well, except for this particular day, which was delightful, even with a slight navigational hiccup. My lack of base map for the northernmost section of the route made the ride into Seligman a little confusing, but I'd downloaded the route to the Ride with GPS app on my phone and was able to figure it out by pulling up that map.

While Matt and Kate dealt with another flat, I rode ahead to the grocery store, where I was immediately overwhelmed by the aisles and options. I'm used to fueling on C-store fare and hadn't put any thought into smart grocery store selections. I didn't have the mental energy to figure it out on the go, instead retreating to the comfortable familiarity of the neighboring gas station.

They caught up with me as I ate my processed garbage in front of the gas station and waited until I was ready to move on. Matt told me not to wait on them if there was another flat, so when they disappeared shortly after we turned off the main road I reluctantly continued without them. The company had been great while it lasted.

Some time later, though, they rode up again. It had been a crash that slowed them down. Wary of another flat, Matt had been riding behind Kate to check her back tire. Kate (new to gravel) took a bad line on a downhill curve and went down. She rallied, wiped off the blood, and caught me again.

We rode into Beaver, my original destination, in what seemed like no time. After grabbing the mandatory selfie and making a somewhat nerve-wracking trip across the one-lane suspension bridge, we pressed on.

Eureka Springs seems like a super cool little town, but there was way too much traffic for me to enjoy riding there. In fact, the only uncomfortably close pass of my race came on the ride into town when a motorcycle flew by me on a narrow road. On the other hand, there was a great ice cream place, so it wasn't all bad. We stopped there, then said our goodbyes outside of the Subway after I stocked up for my next couple of meals.

I passed several hotels as I rode away, but I with 55 miles down I still felt good and (that same old song) it seemed too early for me to stop. I set my sights on Madison County Wildlife Management Area, which has numerous designated campsites. I'd get another 20 miles done and sleep for free. That sounded pretty good.

The next 20 miles kicked my butt, and as I rode through the WMA I started feeling nervous about camping by myself in the middle of nowhere. Though I'm probably safer in the middle of nowhere, facts have little bearing on my fear. Rather than camp alone, I called ahead to a campground outside of Marble and made a reservation. The additional ten miles seemed like a small price to pay for peace of mind.

My light worked fine as night fell until it suddenly cut out on a shitty gravel downhill. No amount of wire jiggling could coax it back into business. The faint light of my headlamp did little to cut the darkness, so the last five miles was incredibly slow as I picked my way along some of the worst roads of the day, barely able to see even at a walking pace.

I finally reached the turn to the campground, following another gravel road over a low water bridge to what seemed like nothing more than a soggy parking lot. Arriving in unfamiliar places in the dark never failed to be disorienting, and that was certainly the case this evening. Eventually I saw that the road continued and made my way into the dark campground near 10 p.m.. Thankfully the owner had waited up, and he showed me to my site.

I quickly set up and then headed to the bathhouse. A hot shower has seldom felt so good, and I was able to take my time because no one else was around. I'd ridden over ten extra miles to a "real" campground so I didn't have to be alone, only to arrive in a place with only one other camping unit. 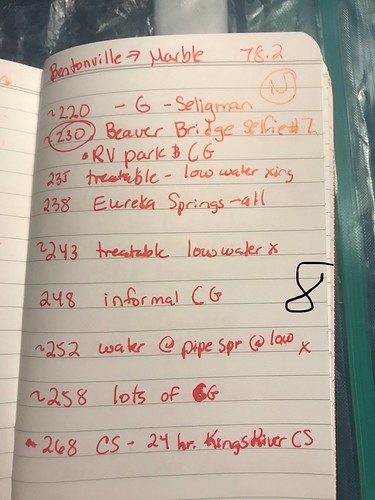