Who says you can't go home? 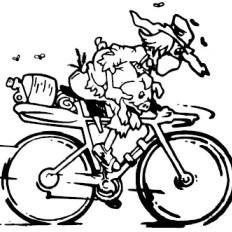 I had conflicting feelings about a return to the Arkansaw High Country Route. There were the concerns about leaving my family and spending nearly two weeks riding my bike all around another state during a pandemic. Is is it safe? Is it responsible? I would be about as socially distant as possible and wear a mask inside stores, but I still questioned whether it was the right thing to do.

There was the mix of nerves and excitement that accompanies any big challenge, compounded by the fact that this time I knew what I was getting myself into. Last year had been the hardest thing I'd ever done, and I'd come home advising other riders to take all the gears they could.  A February trial ride in Jasper had proved to me that, while I could tackle the route singlespeed, I probably didn't want to. And yet, I never got around to converting my Fargo back to gears.

Hanging over everything was the fear that this new effort might somehow taint the original experience, which had been the most meaningful self-centered accomplishment of my life. Still, that 2019 race had been so special to me that it didn't seem possible to stay home while it was happening again.

When I'd initially registered, I'd hoped to coast on my fitness from my training for/attempt at April's Iowa Wind and Rock. That April date -- and any form of group rides -- were COVID casualties, and without a goal race or training partners my training was lackluster at best. I may have entered June with similar mileage numbers to those from 2019, but this year was heavy on short, flat, paved rides. And, speaking of heavy, I weighed about 10 pounds more than last summer. That said, my body has a history of doing what I ask it to regardless of readiness, and that's what I was counting on this year.

The 2020 race had actually been pushed back to October 31, a time frame that emphatically doesn't work with my teacher schedule, but a small group of friends was planning an ITT of the route starting June 5. My FOMO had raged during every weekend trip they'd taken through early spring, but it took until a week before the start for me to fully commit.

So, TLDR: I was overweight, undertrained, and uncommitted for a really difficult 1,000 mile race. On a singlespeed. What could possibly go wrong?