We made it in from our second trekking leg right around 7:30, almost exactly 12 hours into the race. By the time we left transition, we were surrounded by night. With our headlamps and bike lights the only artificial light for miles, the sky was amazing. I don't remember the last time I've seen so many stars.My night biking experience is limited to the end of the Deuce and the beginning of the Berryman, so I was relieved that our night bike leg would be spent on roads. "Roads", in a race like this, is a relative term and can refer to pavement, gravel, or jeep/farm roads.

The longest I'd ever raced before LBL was the 14.75 hours Jim and I (or Gemini, depending on how you choose to hear me repeatedly reference my first big official adventure race) spent at Berryman.  12 hours into LBL I still felt great, but I was waiting for the shoe to drop.  I like my sleep, so I fully expected to be hit hard by the sleepless night and was curious how I'd cope.

The struggles of the day seemed to be behind us.  Casey's legs were cooperating, the bikes were working, and since I attributed Luke's navigational difficulties mostly to the distraction of our problems I figured things were about to get better. We'd had a somewhat rough day, but despite the multiple issues we'd encountered, we were also having a great time.  No one was getting mad (except possibly at themselves), we just kept rolling with the things thrown at us.  After all, nothing could take away the fact that we were finally at the race.

I made it about 50 feet down the road from the transition area when I had to stop and adjust my headlamp.  I'd borrowed Casey's extra Princeton Tec Apex headlamp since it's far superior to mine, but I'd neglected to adjust the straps before the race and then we'd loosened it too much at transition.  This is the kind of preventable time suck that doesn't need to happen.  Why exactly didn't I adjust it back at the lodge so all I had to do was slip it on?

(I know I'm going to screw up the order of events on this bike leg.)

Like the beginning of any run I've ever done, the first mile or so on a bike usually feels like I'm riding in quicksand.  As I followed the guys down the gravel their lights illuminated the route ahead of me so I wasn't surprised by ruts or rough spots, and soon we were back on the road...until Luke got a flat tire. He made quick work of changing it until it was time to put the new tube in, and then he ran into a problem.  I honestly wasn't paying too much attention because we all know that only the saddest pit crew would ever want me changing tires, but Bob stepped in to help and quickly identified the problem. 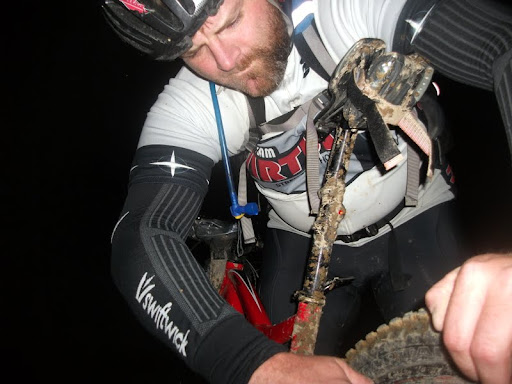 "This is a 26" tube."  Which, you know, isn't too helpful on 29" wheels.  Tire fixed at last, we were back on our way and got the next couple of CPs without any trouble that I remember.

Every other CP had to be reached via a specific mode of transportation, but you could get to Checkpoint A any way you wanted.  We opted to take the bikes, a plan I was happier about before I saw the sketchy gravel hill we had to ride down to reach it.The guys shot down the hill while I crept along, holding my breath through every dip, rut, and washed out area.  Pretty soon Luke and Casey came back my way to light the road a little better and call out tricky spots so I could avoid them or at least be ready for them.  I breathed a quiet sigh of relief, which lasted until I realized I'd have to ride back up.

"Just so you guys know, I'll be walking that," I admitted to my team.  Then, I don't know exactly what happened, but I started first (which I never do)...and then I just kept riding...all the way up the hill.  For a stronger rider, it would be no big deal, but it was a proud moment for me. 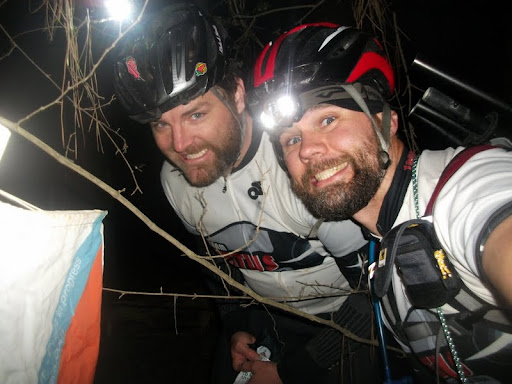 The rest of this bike leg is kind of a blur for me, and one where again and again we did ourselves no favors.  There was a lot of pavement, with long, screaming fast downhills where I primarily trusted in the fact that I could see Luke and Bob's headlights in front of me and if they hadn't died I probably wouldn't.  There were the uphills, where the guys effortlessly climbed and I plugged away.  There was the turn onto a gravel road that the entire team missed, culminating in a later wrong turn and Luke (the one team member who hadn't yet fallen) crashing hard in a rocky creek crossing and coming up mad enough that I was afraid he'd been injured.


There was the farm road that showed on the map and but disappeared in reality, forcing us to double back.
And, of course, there was the lesson that you apparently have to learn in every race: don't follow another team.  Well on our way to CP17(?), another team rode out from the point and told us something about it being past a grassy field.  Rather than just following the map, we ended up stopping and searching near two different wrong grassy fields before finally being passed by several other teams and finding the correct spot.

We rolled into the bike/canoe transition area at 11:47 p.m.  The temperature was definitely cooler than in the day, but it wasn't bad at all (high 50's, low 60's?).  The possibility of rain still hung over us, so we opted to put on our rain gear.  Since this is the first time in three adventure races I've actually needed the stuff I had to buy, I was kind of glad to use it. 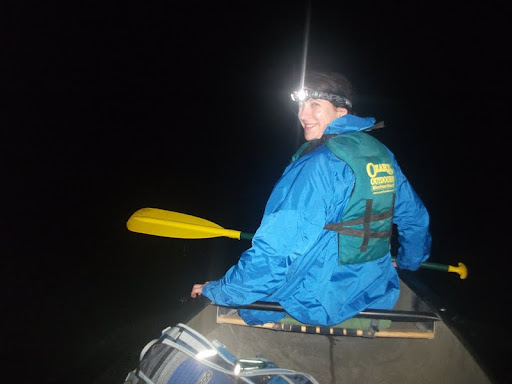 The air had seemed pretty quiet on our ride, so I was really hoping the lake would be still as well.  Thankfully, it was.  In fact, it was like glass for our entire paddle.   Despite the fingernail moon, there was enough light coming from across the lake that I ended up turning off my headlamp.  It was actually easier to see without it.


This was my first ever night paddle, and counting coves was interesting in the dark.  We stayed fairly close to the shoreline and turned our lights on as we came to them.  Even so, we missed the correct cove for our the first CP of the paddle leg, CP19 with the interesting clue of "lagoon".  On the map, it looked like you had to come around a little rocky finger on the side of the cove and find the CP.  In reality, there was no boat access to the lagoon.  The flag was floating in the middle of a pool on the other side of a small, rocky hill.  You had to carry a canoe over the hill and paddle out to it (since the guys wouldn't let me wade/swim over).  Tricky, tricky.


The next point was had a lagoon clue as well, but we were ready for this one and found it without much difficulty, and then it was time to paddle back.    The nice thing was that I felt pretty good paddling; it didn't hurt except for the (many) times I banged my hands against the side of the canoe, but no matter how hard I paddled we couldn't keep up with Casey and Bob unless they slowed way down. While the water was smooth and the night was beautiful, the paddle seemed to take forever.

Thank goodness Luke knew what he was doing, too, because I never would have found my way to the cove where the canoe beach was (and where, I think, we'd put in and taken our for our initial canoe leg).  In fact, though he was dead on, I doubted him right up until we turned into the cove and saw the fire...and even then the stacked canoes looked like some kind of a bathhouse or something and I had a moment of sinking despair before I realized what I was seeing. I guess I can be excused for being a little confused...when we beached our canoe, it was 3:57 a.m.

Unlike the previous paddling leg, this one was a point-to-point.  Our bikes were back at the beach where we'd put in four hours before, and now we were set to trek back to them, collecting as many CPs as we could in the dark.

By the time we left the canoe beach, we'd been racing for over 20.5 hours and awake for 23.  We were varying degrees of tired, but overall feeling good.  We had faced what seemed like problem after problem, some of our own making and some seemingly the will of spiteful AR gods, and through it all we had persevered, stuck together, and above all, had fun.

But things can always get worse.  And indeed, before the sun rose, they did.