As antsy as I've felt being "stuck" only running because of the training demands of my upcoming 50K, when I got the opportunity to spend Saturday mountain biking on the Middlefork section of Missouri's Ozark Trail, I jumped at it, even though it mean putting off Saturday's scheduled 18 miles until Sunday...and doing it after spending the day on my bike.  I'm not known for making smart training decisions...why start now?  Of course, as soon as I agreed to go, the weather got crazy and our area was hit by some major storms and a lot of rain.  Not being sure how the weather would affect the ride, I got nervous and started to bargain.

After all, you can run in just about any weather, right? Though, I have to admit, some of my running friends weren't thrilled with my deal-making.  Sorry Dawn! :)

Whether by luck or mercy, Saturday's ride was on.  I had everything packed up Friday night so that I could be out the door by 6 in the morning to meet my ride at Sunset Cyclery. I grabbed my usual coffee and muffin on my way out of town, and I actually managed to get there in plenty of time.  I rode with Jim, who I'd met at January's Team Virtus-organized Berryman ride, and his wife Sarah down to Middlefork. 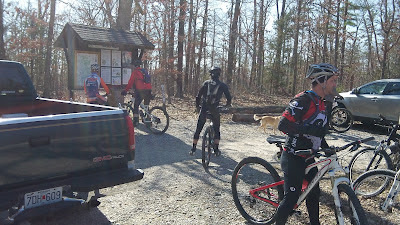 There were about 17 people in our group, so it took a little waiting around before everyone was all set.  The weather, which I'd worried about, ended up starting in the mid 30's.  It was windy, but that wouldn't be much of an issue on the trails, and the day was beautiful and sunny.  Great day to be on a bike! 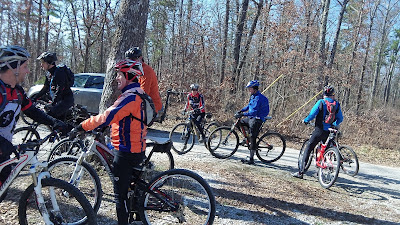 Sarah is used to riding with Jim, so I'd warned her about how slow I am.  Since I had never been to Middlefork and hadn't been on my bike since the end of January (stupid 50k), I was very happy starting at the very back.  Of course, I'm typically happy at the back, so that's not really anything new.
The trail has some dirt surface, but a lot of it is rock.  The terrain is typical of most Southern Missouri trails I've ridden--lots of hills and lots of creeks.  I walked the first couple of creek crossings before I started feeling comfortable, but then it was all good.  The nice thing about the climbs was that they were kind of broken up: you'd climb, it would briefly level out, then climb again.  I was definitely winded at the top, but those little breaks made the uphills a lot easier than a straight climb. 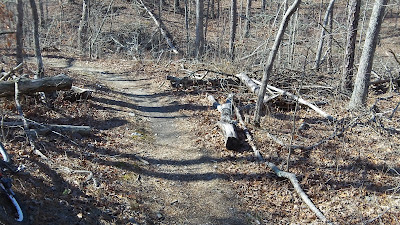 It's always makes me a little nervous to ride with somebody I don't know, but I had a good time riding with Sarah and getting to know her.  We have quite a bit in common: we both came to mountain biking the same way--through adventure racing, and she's a runner, too.
﻿
﻿ Since the guys had taken off first and were moving at a way faster pace than I was, we didn't see many people while we were riding.  On the way out, we passed one hiker and a couple of the guys who were dealing with a bike issue.  Otherwise, we could've been the only ones on the trail.


I really had a great time on the way out.  The trail was awesome, the company was great, and the day was beautiful.  Sarah asked how far I was wanting to go, and I was fine with riding the 15 out we'd originally planned.  The more we rode, the more comfortable I felt.  Comfortable enough to follow Sarah through a tricky creek crossing.

Sarah made it through with no problems.  I, on the other hand, got to the spot where the water funnels between the narrowish spot between the two rocks over the word "day" and got hung up, falling into the creek.  It wasn't a bad fall, so all I could do was laugh and drag myself out.  I managed to go down another time later, probably taking too much time slowing down and overthinking rather than just riding.  Story of my life.

We stopped for a snack break a the top of a climb about 11 miles in.  I'd just started thinking, Hmmm, 4 more miles before we turn around...when Sarah suggested that it would probably be a good spot to turn around so we'd be back before the guys.  While earlier I'd been all about the full 15 out, I was glad to turn around.  And thinking it over, my longest ride on singletrack has been 24 miles at Lost Valley, so expecting to be just fine riding 30 fairly hill miles after being off the bike for a month was probably not too realistic.

The first descent on the way back was pretty awesome, but I really struggled for the rest of the ride. At first, I just felt really sluggish on the uphills...where I'd been comfortably in my middle ring on the way out, I was having a hard time in the smallest one. Then, my quads started cramping. Not sure what was going on with that. I think I did pretty well staying hydrated, and I was alternating water with an electrolyte drink (Camelback Elixar, which I'm not a big fan of and won't buy again), but I felt terrible.


Again, looking back, I probably didn't eat enough. I had a muffin at 6 a.m., then during the ride I ate a pack of Sport Beans, a Honey Stinger waffle, a Kind bar, some pretzels, and a GU. Since we started on the ride around 10 and were out for 4-4.5 hours with stops and such, I think that's low on food for me. It doesn't explain the cramps, but maybe it's part of why I morphed into the biggest bike wimp ever. Sarah was great about stopping when I needed to, but it was honestly embarrassing to be SO weak.

The worst part, other than becoming a total lead weight, was that I was totally unable to appreciate the beautiful trail on the way back.  On one level, I recognized that it was a wonderful day and a great ride, but I couldn't feel it at all.  Instead, I hated mountain biking with a black hatred and spent probably the last 6 miles fantasizing about what part of my bike I could break to justify walking the rest of the way back and then spending the rest of my life planted on the couch.

When Sarah encouraged me that we only had one climb left, I began to feel some hope, but I had no real perception of what a "climb" was anymore because any incline had me struggling (and believe me, I walked a few of them).  At last, she said, "The good news is that we're almost there," and then there were the cars.   I was thrilled to be off the bike and had decided that there was no way I was running the next day, but once the ibuprofen kicked in and my legs stopped hurting, I once again loved the ride and the trail and my bike and was open to the possibility of a morning run.  Amazing the perspective you get with a little pain relief. :)

I had a great time hanging out and talking with some of the group after everyone was back and was home by 6:00, just in time for movie night with my SIL and some of her kids.  I wasn't a very good companion, though, because I was asleep on the couch by 8 and in bed by 10.  After all, I was pain-free, well-fed, and needing rest before the next day's group run.

I met Chuck, Lori, Pat, and Robin , and we all headed out to Cuivre River State Park for a trail run.  While I was certain this was going to be another awful run like my previous two long run attempts, I didn't want to miss out on a morning in the woods with my friends, even if I had to walk the majority of the run.  Instead of dragging, though, I felt surprisingly good.  Granted, our pace wasn't setting the world on fire, but any time you can be enjoy running out in the woods is a good run as far as I'm concerned.

We came to an intersection in the trail and weren't sure which way to go.

Finally we decided on our route, but we wanted to make sure Lori didn't miss the turn.

Once we got going, though, Chuck realized this didn't seem quite right, so we turned back around and dismantled our awesome arrow.  I was ready to run back the way we had come since I was totally mixed up on direction (is it any wonder I got so lost at Babler?), but we figured it out.

I think at this point Patrick had some hairbrained idea that I may or may not have agreed to.

We found maybe the most random trail artifact of all:

We wanted to see Lori's reaction to the wig, but when she caught up she managed to carry on a conversation with a straight face while the rest of us were trying and failing to hold back smiles.  Her reticence was truly impressive, but finally she gave in because she knew we were dying for her to say something.

We passed the spot that broke my heart in last year's Quivering Quads race, where I looked at my stopwatch and realized that, rather than running a blistering pace like I thought, I was actually running slower than 12 minute miles...and then played around on the rocks above the creek...

So it occurs to me that the reason the run felt so good is probably that we spent so much time not running, but I had the best time. It was just like playing out in the woods with your friends when you're a kid. What a fun group of people.  What a great day.

I ended up running around 8 miles, which felt really good but wasn't the 18 miles I had scheduled.  That makes three weekends in a row that I haven't come even close to my planned mileage.  Decisions have to be made about this 50K...but this post is already long enough.
Labels: Cuivre River State Park Middlefork mountain biking Ozark Trail ROCK racing Sunset Cyclery trail running