My love for adventure racing has led to me into situations that others might consider dangerous: traipsing through the Mark Twain National Forest for 9 hours with someone I met over the internet, standing in the woods wondering if I was about to witness my first MMA bout in person as two teammates had a serious difference of opinion 20 hours into a race, and riding alone in the middle of the night through the Flint Hills of Kansas.  Of the three instances mentioned, only the last was actually scary...and only after I had fallen.

The more frightening things for me are pretty mundane by others' standards.  I worry about letting down my team.  I'm not thrilled at the idea of capsizing a canoe.  And even a year and a half into my mountain biking "career", the sport still scares the crap out of me.  Speed freaks me out; hills make me whimper; and singletrack after sunset leaves me curled up in a fetal position.

Luckily, there are steps I can take to make these fears less potent.  I'm honest to a fault about my failings and wimpiness because I want any potential teammate to know exactly what to expect.  I'm no Robyn Benincasa; I'm more like Lucille Ball in bike shoes.  If you race with me after reading what I have to say about myself, well, you have no one to blame but yourself if you don't like what you get.  The canoe, well, I'll be wearing a life jacket.  And in mountain biking, I can (and do) always slow down.  If something's too sketchy or scary, I'll walk it.  My pride is weaker than my sense of self-preservation.

The wimp-out option has worked pretty well for me to this point, but I'm now facing something that strategy won't help.  In three days (three days!) I'll be in Mt. Carroll, IL, for The Thunder Rolls Adventure Race,  It's another 24 hour race, but I'm not too concerned about that; it's the ropes that have me worried. 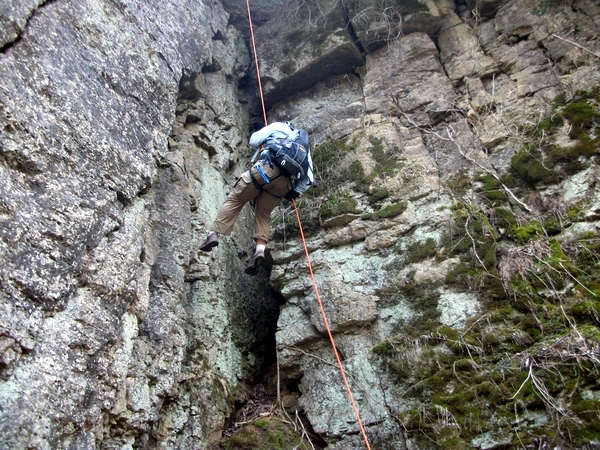 I'm not a fan of heights.  Like, at all.  On a 2000 trip to the Smoky Mountains, I couldn't coax my terrified body out of a crouch when we reached the peak of the Chimney Tops trail.  Seriously.  While 9-year old kids scampered like mountain goats I sat still and held on for dear life.  And now, some time in the next 3-4 days, I'm going to have to rappel and ascend and endure whatever other high-altitude horrors await.

I have no poker face, so my "friends" have taken great joy in encouraging me with posts like this.  And linking to this post from my own team's past, basically forcing me to look at pictures of friends hanging upside down on rappels. 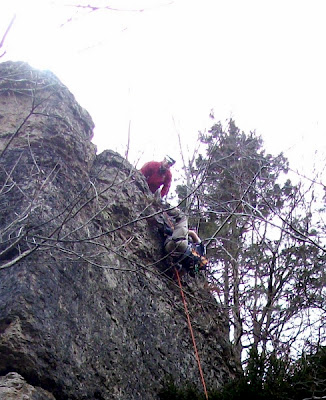 I know, I know...they torment me because they love me.  Or because they're sadistic bastards.  Maybe both.  The upshot is that I'm facing one of my bigger fears in just a few short days, and there's no way to make it easier.  The cliff doesn't care that I'm scared of heights.  There's no making it shorter.  It's either do it or don't...and "don't" isn't an option.

The weird thing is that, while in theory I'm terrified, I'm actually not (yet).  I have a bit of a gift for compartmentalizing things, which is why I can write all about how scared I am without feeling it (yet).  It's the same gift curse that allows me to get to the brink of losing my teaching certificate before I finally locate my continuing education information.  The way it works is that I push aside the worry until the last minute and then it all comes crashing down at once until I finally deal with the situation.

This time, though, I've got  a better plan.  See, Kate is a chicken, but SuperKate/Kage is the kind of girl who signs up for a 200-mile bike race on a whim.  Who talks a bunch of shit she can't back up and then lucks into a partner who CAN.  I don't think I'll be able to pry Kate off the bike, but I'm leaving her ass behind for the ropes and going into it with the attitude that it's all part of the race, trust your equipment, just do it...choose your cliche. And dang, it's going to be cool once I'm back on the ground. 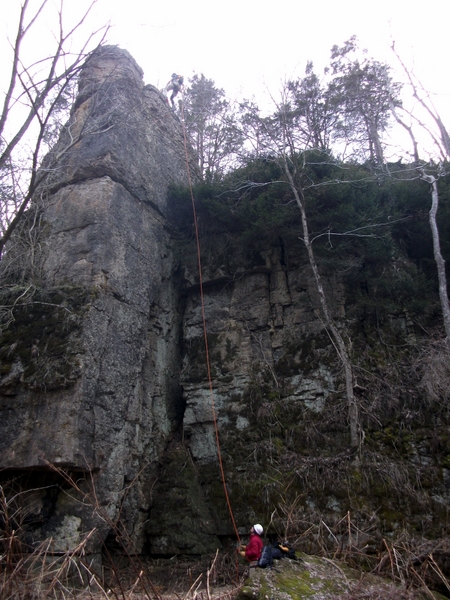 It helps to have an alter-ego who's kind of a badass.
Labels: fears high ropes Thunder Rolls adventure race WTFAR