Having my summers off gives me a lot more training leeway than I have during the school year, but the fact that my friends don't share my open schedule means I still do a lot of my training alone (or, in the case of this year, I don't do that much training).  Luckily, my friend Lindsay is usually available for early morning runs, and this Tuesday Chuck had the day off.  Since I'd never been to Matson Hill Park, we met up over in St. Louis and headed that way. 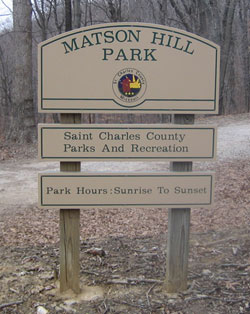 You know any park with "hill" in its name is going to have some climbing, and at Matson the uphills start before you even get into the park.  I was pretty really glad to be in the car jeep as we passed a Katy Trail parking lot and drove up up up.

We had plans to bike and run while we were there, so we started off on the bikes.  The trail weaves downhill, through a short flat section, and climbs up again.  This was my first time at Matson, and my first time on a mountain bike since July 18 (only my second since June 23!), and it always takes a while for me to get my sea legs under me on singletrack.  I know that I'm going to be really tentative starting out; that's just how I roll.  Still, I was a little disheartened to look down at my Garmin and see the kind of pace I'm used to when trail running -- and we were riding downhill!

Matson's a great trail...mostly dirt with some rocky patches thrown in, creek crossings (all but one of which were bone dry yesterday), and lots of switchbacks.  Even around 8 in the morning in the shade, it was hot and humid. Bleh.  I was feeling pretty wimpy at the beginning and walked spots that made me nervous, but I got more comfortable as we rode.

Once we'd been riding for a while I felt more comfortable and started enjoying myself.  The bazillion switchbacks I rode at the Indian Camp Creek race must have helped, because I only put my foot down a time or two on switchbacks.  We got to ride on the newest section of trail, and we had to stop to check out some fun trail relics.


It wasn't all fun and games, though.  Downshifting, I three times managed to drop my chain off the back cassette, but the best was when I clipped a tree and went down.  Well, I managed to jump off the bike and not fall, but in the process of what was a very minor fall I managed to bend my rear wheel and break a spoke.

I probably would have done less damage if I'd just fallen over with the bike instead of jumping off of it, but landing on my feet was pure dumb luck, so it's not like next time I'll think it through better (and make no mistake, there WILL be a next time).  Luckily, in addition to being my trail guide and very patient riding partner, Chuck can also true wheels, so after we got it in good enough shape to ride out, he took it home and fixed it all up for me. Thanks!

All in all, we rode 7.6 miles at a nearly 14 minute/mile pace.  Even considering putting my chain back on three times and having to mess with my wheel after I fell, that's pretty darn sad.  But man, I had a good time, and even though Chuck could have probably ridden our route twice in the amount of time it took once with me, I never once caught him making a face.  Of course, he was ahead of me, so maybe that's why. :)

Our ride was over, but we still weren't finished with Matson.  I changed out of my soaked bike gear and threw on running clothes, and then we headed back onto the trail.  The first (downhill) part felt really good, but the uphills were pretty terrible.  This combination of being out of shape plus temps in the 90's is a killer.

Even with hills, though, I just love running on trails.  It's SO much more fun than running on the road.  That's not to imply I wasn't cussing the hills, though, and I couldn't have been happier when Chuck mentioned that the short loop was sounding pretty good to him.  I did a chunk of uphill walking in the last half of our run, but when the trail flattened out, running actually felt really good.  It's great to have that feeling again, even if it's only briefly.

I'm going to have to be working up to a lot longer runs than the 2.7 we ran, though, because I just registered for this year's Skippo 30K trail race.  Despite the fact that I did this same race last year and should know better, I still went and signed up for the longest distance...and then started doing the math.  Yikes...18.6 trail miles.  But I do love this race, and it looks like I'm going to have a stack of friends there, so that'll make for a great time.  And if this doesn't get me running again, I don't know what will.
Labels: I still suck at mountain biking Matson Hill Park trail running