The St. Louis Orienteering Club's Cold Nose-O at Babler State Park was held on the last Sunday in January. This particular meet is a memorable one for me since, several years ago, it was my first solo attempt...one which did not go well at all. Tears were involved.  This year was far better, though it's hard to judge how much better since I stuck with Mickey the whole time.

True to form, I spent the first mile or so getting my disorganized self together while running down the road: restarting the Garmin that wasn't picking up, taking off the fleece that I'd known would be too warm and attempting to stuff it into my small camelbak while running, etc. Thanks to all of this, I hadn't even looked at the map before we hopped off the road and into the woods and was able to give little to no input when we had our typical shaky start.  We'd started ahead of the BOR guys, Amanda, and Dave, and we all ended up finding the first control around the same time. 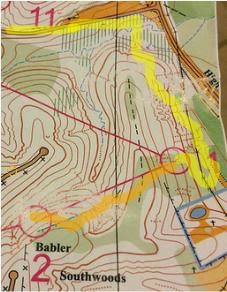 From that point, however, I felt much more comfortable with the map.  We moved in a loose pack up and over the hill, but I was pretty focused on doing our own thing rather than following anyone else.  I think we took slightly different lines, and when we reached the hill for control 2, we saw Scott already at the top looking for it.  We curved around the back of the hill and spotted the control ahead of us. While we didn't go exactly straight there, we didn't have much wasted movement either. Much better! We punched and moved stealthily away. 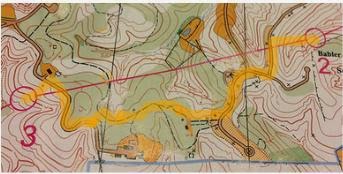 2-3: Crossed the reentrant to the road (though looking at this now I wonder if it would have been quicker/easier to go back uphill to the road next to the number 2 on the map), ran the road to a trail intersection, ran the trail (passed by Jeff R. around here), short bushwhack to the road, and the cut in off the road to control 3. 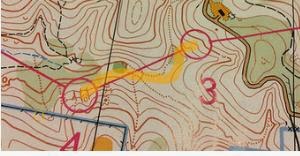 3-4: Dropped down into the low area, followed it until it was time to climb uphill a little and look for the control. I was really happy at this point. It's such a good feeling to know where you are and where you're going...and have it work out! I remember telling Mickey, "I love this sport! This is so much more fun when you aren't lost!" Mickey actually walked right past it, so it was a good thing I was slower. Passed by Sunny, Doug, and Melissa here. 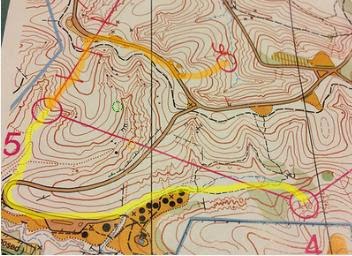 4-5: Downhill to the trail. It's a measure of how single-minded that I can be (and maybe how little I trust mapped trails, which are all too often changed from how they look on the map) that I was looking for the creek and surprised when Mickey spotted a trail which I hadn't even noticed on the map). Ran the trail to the road, then ran the road til it turned north and cut off into the woods and up the reentrant to control 5.

5-6: Climbed uphill to the road, ran the road to a picnic area, cut downhill to the control. After 5 consecutive successful attacks, we (or at least I) were full of confidence...which is usually where things start to go downhill for me. 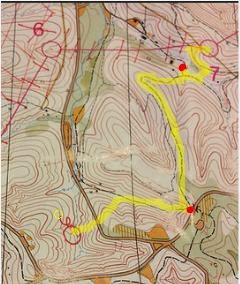 6-7: We hiked uphill to the road from 6, and then headed back into the woods to bushwhack to the trail.  So if you look at the above picture, which shows our approximate route, you'll notice that we took the worst possible route to the trail (climbing uphill through the woods and then down a fairly steep slope to the trail, when we could have just run up the road to the tunnel indicated by that lower red dot (where, incidentally, we saw one of the controls for one of the other courses).

From that point, we moved off of the nice, paved trail to the horsed-up, muddy equestrian trail. Skiing downhill through ankle-deep mud was kind of hilarious -- and guilt-free, because it was a horse trail!  We found yet another bonus control at a stone structure at a trail junction at the bottom of the hill...

...and while we could have just taken a short bushwhack across to the next section of trail, instead we went back out to the equestrian trail because in the time we'd taken to stop and get pictures I'd totally lost track of where we were on the map and was just following the trail.  Luckily Mickey has a longer attention span and got us to control 7. 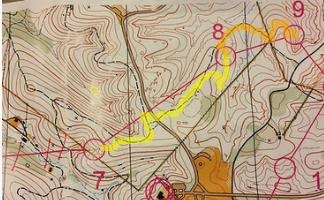 7-8: We saw Dave B. heading down towards 7 as we were coming out, a clear reminder that clean navigation beats slightly faster moving on less efficient routes.  We initially missed the trail where it crossed the road, and then I brought us off the trail way too early, leading to some searching before we found the control.

8-9: All I remember about this point is that the trail and terrain were really not matching what I expected from looking at the map. Not sure if that's because there had been some kind of trail reroute or if I was just way off.  Either way, finding 9 took some additional wandering, and Dave got there ahead of us. Booo. (I mean, great job, Dave). 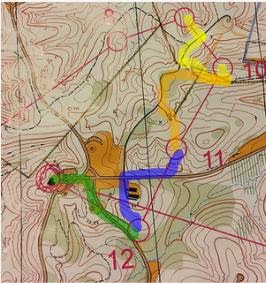 9-10 (yellow): Confidence shaken, I was all about Mickey doing all of the remaining nav. We passed Dave briefly by running, but then he passed us by cutting off the road sooner with a better route.

10-11 (orange): Ran the trail back out to the road, where thankfully my partner knew which way to go because I totally thought we needed to go in the opposite direction.  We re-passed Dave by running, then went directly to the flag. One more to go!

11-12 (blue): We set a brisk pace away from 11 so we could keep our "lead" (actually, we were still behind Dave since he'd started after we did). We were almost to the top of the hill when the other Dave popped out onto the road holding my passport. Doh! Mickey sent me on ahead and ran back for my passport. We went behind the buildings, while I think Dave went in front of them, so we all got there around the same time. Luckily, I'm still a slightly better runner, so we made it back to the finish ahead of him (and yet still 3 minutes behind him.  Next time...)

Overall it was a good day but my part of the navigation left quite a bit to be desired. But any day spent playing in the woods and followed up with margaritas and Mexican food is a pretty good day.