***Working on the backlog I've somehow accumulated since the beginning of the year.***

January 23 was the Frozen Feet half marathon. It's billed as a trail half, but it only includes about a mile of singletrack and the rest is crushed limestone or paved trail.  I did this same race two years ago and it was ok, but I didn't love it. Don't get me wrong, there are lots of things to love: well-organized, great race sweatshirt, low price, indoor area to wait before and to eat the free pizza afterwards. I think my somewhat negative view was largely influenced by my disappointment with my time (2:01, making it my only road half over 2 hours).

This year Mickey and some other friends signed up, but I held firm. I wasn't crazy about the route, I wasn't in half marathon shape, and I wasn't doing it. It sold out, but another 20 spots opened up and before I knew what I was doing I was registered. 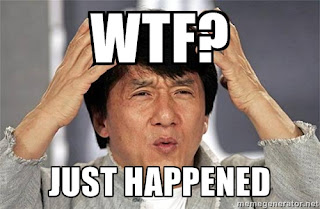 Two days later I checked the orienteering club's website and remembered the reason I hadn't signed up for Frozen Feet last year: it's held the same day as the Babler O meet, which I really wanted to do.  Not one to waste an entry fee -- or go to the trouble of finding someone to buy my entry -- I decided that I'd get my race sweatshirt, run about half of the half as an out-and-back, and go do the orienteering meet that I really wanted to do and was paid for with my SLOC membership.

In the end, pleasantly surprised by how not terrible I felt during and after the 12 miles I ran at this years' Little Woods trail race, I opted to run the whole half marathon and volunteered to help clear the course after the orienteering meet, proof that you can have your cake and eat it too. This didn't mean I was at all happy to be up stupid early for the drive to Wildwood on a chilly January morning.

I'd signed up with a conservative predicted pace that put me in the second-last wave. Michelle was in this wave as well, and we agreed to stick together as long as our paces meshed, which ended up being most of the race. The first mile or so is on a paved trail, and then the course turns onto the crushed limestone surface of the Al Foster trail. On a normal day, it's not much more taxing than running on a sidewalk.

On race day, the trail was covered with a couple inches of churned up snow, making it more like running on a really cold beach.  I'd worn my trail shoes, so my footing wasn't too bad. I felt for the people who'd worn their regular road shoes after assurances that the trails were well cleared; that was only true of the paved sections.


Maybe it was the snow or the rare company during a race, but I really enjoyed the course this time around.  There was bleak beauty of the snowy trail, stark trees, and icy river and then the lift of the familiar faces we kept seeing on out and back portions. After a more aggressive start we settled into a pace in the mid 10's and had just eased into the 11 min/mile range as we hit the only true singletrack portion of the race.  Despite the freezing temperatures, the sandy trail was surprisingly soft.

We retraced our steps back up the snowy Al Foster trail to a turn onto the paved Rock Hollow trail. Rock Hollow is about 2 miles of gradual uphill. Last time I raced Frozen Feet there were icy patches that made downhill footing a little treacherous. This year the trail was well cleared, so our reward for the long climb was a much less scary downhill.

Michelle's friend Peter, who'd started in the wave after us, caught her right at the top of the hill. I was slightly ahead at that point and continued back downhill on my own. He caught up with me about halfway down and made the next couple of miles go quickly as we talked about running and PRs and adventure racing and his alleged tendency to be whiny when he's tired.

I hadn't looked at my Garmin since the race start, but I peeked at mile 11 and realized that Peter was within reach of his PR. "You may not want to know this," I told him, "but if you don't take any walk breaks I think you could have a new PR."

Michelle has mentioned more than once how much she enjoys it once Peter starts to get crabby, and it turns out she's not the only one. It turns out there's sadistic fun to be had in pushing someone harder than they want to go; it gave me a little insight into why Mickey trains with me. It was good for me, too, because I probably ran faster in encouraging Peter than if I was just finishing up on my own. I finished mile 13 with my only mile in the 9's since the very first mile of the race. 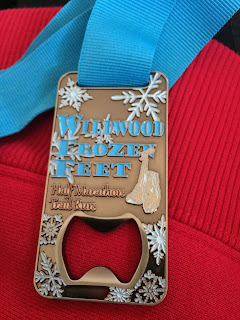 And Peter? He cut three minutes off his half marathon PR.  He may still hate me, but it turns out I can live with that just fine.
Labels: being the rabbit frozen feet half marathon not a PR race report running wildwood winter