I waited until almost the last minute to register for this year's Rocheport Roubaix, not putting down my money until I was confident there would be no repeat of last year's freezing temperatures. Just because I'm tough/stubborn enough to race gravel in a windy 14 degrees doesn't mean I'm dumb enough to do it again. In contrast to last year's bitter cold, we lined up this year in shorts.


Quite a few friends were doing the 68-mile race, but I was happy to stick with the 50-mile course, telling them "it's too early in the year to suffer".  I even volunteered to do an Instagram takeover for Sport Chalet, where I'm a cycling ambassador, because all I wanted from the race was a fun training ride with friends.

Just like last year, our group fractured on the first climb out of time. Unlike last year, I was in the middle instead of immediately off the back. I've spent a lot more time on the bike this winter, and that made a big difference in how I felt.  Chuck and I ended up riding the whole race together, with Jim and Robby ahead of us by a good margin.


Race promoter UltraMax provided several stocked aid stations, but we had everything we needed with us. Our stops were more photo and bathroom related -- not at the same time, though!

The gravel sections were dry and fast-rolling, and the weather was worlds better than last year.  We cruised through the first part of the course with Chuck pointing out spots he recognized and me marveling over the fact that I remembered very little of it; I guess everything looks different when not seen through an ice-glazed haze.

It was a great day to be on bikes.  We turned onto the paved road that passes the big tree and really started flying, passing some people as they stopped at the aid station and others just because we were moving faster. I felt really strong. I've been training a lot more consistently and was excited about how well that seemed to be paying off.

The course is basically an out and back with a small lollipop at the far end and two larger loops in the middle and near the finish. We flew down the last big hill on the outbound leg and then climbed the subsequent uphill much more easily than last year (when I had to walk part of it). As soon as we made the left turn to start our homeward journey I realized the secret of my newfound speed. 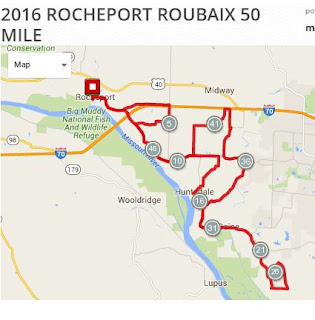 The tailwind that had quietly provided a turbo boost was now a blistering crosswind. I almost needed to lean into the wind to stay upright. Chuck and I closed in on another rider in the hopes that we could find some shelter from the wind, but he was moving too slowly to help.

The turn into the headwind made forward progress even more difficult, but for some reason I still felt good and -- very rare for me -- never let the wind get into my head.  Chuck started to fade a little during this time, so I had to be careful not to pull too far ahead. This was a weird turn of events; I don't think I've ever been stronger on a bike than Chuck, and I'm much more comfortable being the one who's bringing up the rear.

Closing the end of the lollipop we ran into Bob and Luke, who were about to start it. We had a nice little impromptu team meeting at the intersection, sharing the delicious butterscotch whiskey Bob had brought along. Well, I guess I wasn't actually very good at sharing since I drank basically all of it. It was a tiny little bottle...and did I mention delicious?

Luke tried to convince us that, since we were just out for a training ride, we should repeat the loop with Bob and him. I was moderately torn, but in the end I just offered that if I felt good after finishing maybe I'd ride back out to meet them.

"I'm pretty confident," I replied, and then spent the next 25 miles half expecting them, fueled by righteous indignation and manly pride, to come shooting past me.

They started on the lollipop while Chuck and I headed back towards the finish line. While he demolished me on the downhills -- my downhill mojo a casualty of the primarily flat training rides of this past winter -- I continued to be weirdly strong on the flats and strangely impervious to the wind. I mean, I definitely had to work hard even to maintain a 13 mph pace at times, but it didn't bother me. I think looking out for Chuck, much like tormenting Peter at Frozen Feet, was a good distraction for me.

Chuck told me I should just go ahead and drop him, that I might be able to podium if I wasn't waiting, but a) there was no way I'd leave him behind after he spent 40 miles babysitting me at BT Epic and b) after not racing for the first half I didn't see much point in starting now.

We made a quick stop at an intersection so I could take the above picture, and while I was busy choosing between Instagram filters he started towards the hill. "You're just going to pass me on it anyway," he said, echoing a phrase and a move I've done countless times riding with him. In fact I did not catch him on the hill; he was nearly at the top when I put away my phone, social media duties completed, and gave chase. I had to work really hard to catch him, but eventually I reeled him in.

Volunteers waved us back onto the gravel at a blind intersection, and we reached the timed hill climb shortly after that.  "Don't wait for me," Chuck said, "Go for it!" I got a good start up the hill and could hear Chuck cheering behind me. A little more than halfway up I started to fade and then had to veer into the thicker gravel at the edge as a minivan sped towards me in the middle of the road. I topped the hill, crossed the timing mat, and leaned over my bike panting until Chuck rode past.

The last few miles confirmed my decision to ride the 50-mile course. I still felt good, but I'm not sure I would have with another 18 miles of riding. We crossed the finish line in 4:16, got changed, and headed to the little cafe for the soup and drinks that were included in our registration fee. Hanging out afterwards with free food and drinks was the perfect end to the race.

We'd wandered outside to visit and watch for Bob and Luke, and they arrived just as awards were being announced. I knew there was no medal for my 4th place spot, so after clapping for my friend Yvonne's second place award I tuned out the rest and was talking to the guys when Bob said, "Did you hear that? They just said your name!"

While I hadn't finished fast enough for the podium, it turns out my hill time was the fastest woman's time in the 50-mile race. I was, as evidenced by the super flattering photo, delighted and astonished. Hill climbing has never been my forte, and I assumed somehow a mistake had been made. As it turns out, though, not only was my time the fastest by 10 seconds for women, it was 11th fastest overall in the 50-mile race. That's pretty exciting. Apparently there's something to be said for Sufferfest videos and regular training.
Labels: airborne delta cx good days gravel grinder gravel racing Momentum Racing queen of the hill rocheport roubaix Team Virtus Ultramax sports