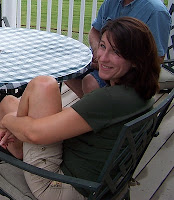 Secret Identity: Superhero masquerading as a completely average first-grade teacher, loving wife, and mother to three rowdy boys. The gift of a hybrid bike back in 2008 has blossomed into a minor obsession with cycling, running, and adventure racing...and the life-changing realization that you don't have to be fast to be awesome, you just have to be willing to put yourself out there.Special powers: Able to leap in over my head at a single bound, donut eating, sarcasm

﻿
Now that I'm world-famous in my own mind, having been recognized from the blog by three different strangers, and more than one of my friends has greeted me in public as SuperKate, I sometimes feel a little self-conscious about my chosen nickname.  After all, in the words of my son, it sounds "awfully egotistical", and it's a little silly given that I spend much of my blogging making fun of myself and talking about how slow I am.  And it definitely is both egotistical and silly if you don't realize it's very tongue in cheek.

﻿On one hand, in my "regular life", I'm very much like Clark Kent.  In fact, once on a group ride, the blog came up, and a girl who read it asked, "Oh, you're SuperKate?"  I don't look like an athlete, and I'm certainly not a talented one. I don't have a badass job; I'm just a normal soccer/volleyball mom.  If it wasn't for my incessant (and, apparently, excessive) facebook posting and talking about racing and training, no one would look at me and guess I'd biked 100 miles or raced for 28 hours.  Putting on braids, tall socks, and bike/running shoes isn't quite flying out of a phone book in a spandex costume, but it's the next best thing.

Compared to pretty much anyone who's involved in endurance sports, I'm not super at all. But I don't have to compare myself to them, only to myself and what I used to be able to do. And you know, my friends who aren't involved in running and cycling are frequently amazed by things that I've done...not because of how well I do them, but because I'm doing them at all. I mean, I didn't run a fast marathon, but I ran a marathon. That's pretty cool.

People think things like running a marathon or riding a century or racing for hours are such a big deal...and they are, but they aren't. I'm not athletic; I'm just determined. I'm not doing anything anybody else couldn't do, if they just tried. I used to be someone who said things like "I could never..." Now I say "I wonder if I could..." Being willing to put yourself out there and chance failure makes all the difference.

I hope that when people read my blog it gives them a sense of possibility. I mean, all due respect to people like Marshall Ulrich and Kara Goucher, but these are people who are blessed with amazing talent and work ethic (and sponsors!). It's easy to be in awe of them; it's hard to look at what they do and see yourself doing it, also. With me, on the other hand, I think people can look and see this absolutely average person and think, "Well she's not all that special; if she can do that, so can I."

So to anyone who looks at me and thinks, "You're no more Super than I am..."