Skip to main content
Labels
Posted by Kate Geisen May 30, 2010

Ran my second 5K yesterday. I ran my first about a month and a half ago. They bookmark my thumb ordeal. I ran the first on the day before I dislocated it, and I ran this one the day after the pins were removed. Anyway...

This was the Run for the Bonifest, a local race. A little more than 700 people participated. Last time, my main goal was just to run the whole thing; this time, I had a plan. Not much of one, but still. I wanted to push myself just a little the whole time. Just run a little faster than whatever I was doing. 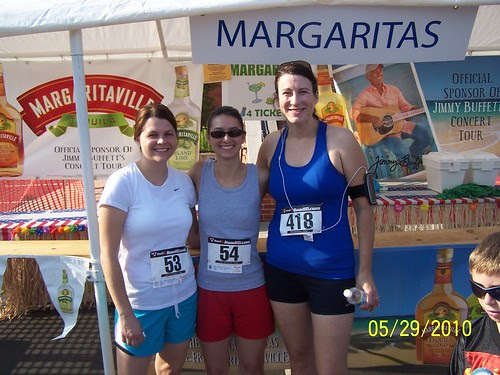 Before the race with my SIL and her friend. The fact that we are right underneath the margarita sign is pure coincidence. Really. But very appropriate. :) 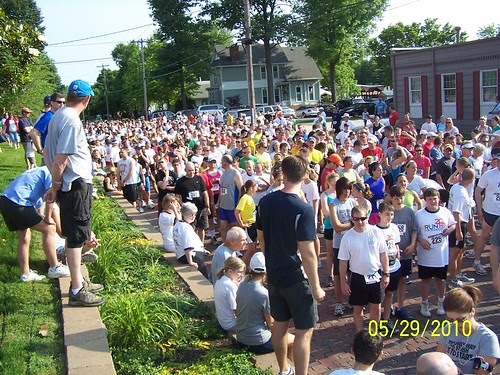 Awaiting the start. I'm really not a fan of having to weave past all the slower people...no more so that all the people who have to weave past me, I'm sure. One nice thing was that they started the walkers at a different location! 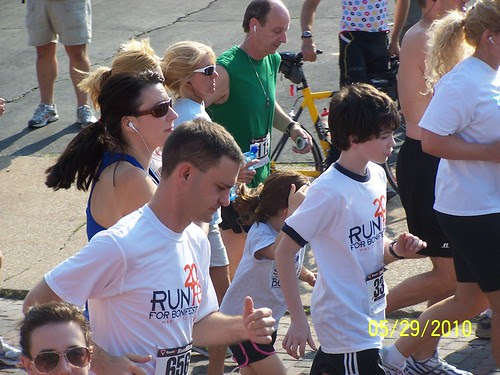 I had my Nike+ all ready on my phone so that I would know how long the run took me since this wasn't a chip-timed race. Right as we neared the actual start line, though, I got a text and hit the wrong button trying to close it. I couldn't really see the screen because of the sun, so I just figured screw it. After about 1/2 mile, though, I was really missing my music, so I took off my armband, got the music going, and started the timer. Lesson learned here: I really need to use my sports watch or just my iPod rather than my iPhone. Less worry about shorting out my phone with sweat then, too! 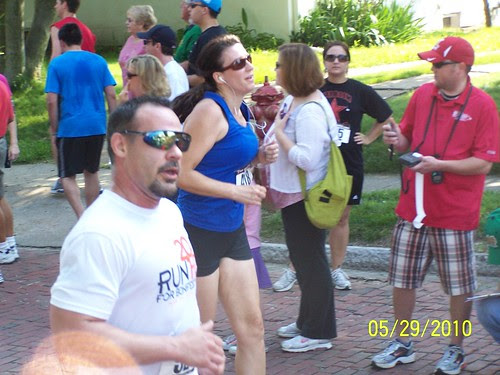 Coming in for the finish. The last leg included a hill...it wasn't steep, but it seemed to go on forever. Some guy right behind me tripped and fell hard on it. Sucks to go out right at the end of the race. :( I was so glad to be coming to the finish that I didn't even notice there was a clock showing the time. In my defense, it was on the mens' side. Then, I stood drinking my water for a bit before I remembered to shut off the timer on my phone. So until the times are posted, all I have are so lousy partial stats and guesses.

My Nike+ showed 2.59 miles in 24:07 with a pace of 9:17/mile, and the hills were in the back part of the run. I'm pretty sure my first part was faster. A friend who finished right around me had a time of 28:14, so I'm guessing that's pretty close to what I had. Guess we'll see. I was pretty pleased overall, though, because it was already pretty hot and humid at 8:30 in the morning, and I was able to finish around when some people who've been running quite a bit longer than I have did.

Update: results were FINALLY posted, I don't know when because I finally gave up on looking, and my time was 28:00. A definite new PR! Whoo hoo! ...of course, I've failed to equal that since, so now I really need to pour it on. :)
Labels: 5K PR running