Skip to main content
Labels
Posted by Kate Geisen May 14, 2012

My mom is one of ten kids, and when her baby brother married at age 18 (19?), he and his bride chose me to be their flower girl.

I guess because they were young, my uncle and especially my aunt did more than their fair share of babysitting me and my brothers.  Despite that, they still wanted to have kids.  After struggling with infertility, they adopted my cousin Christie at birth. 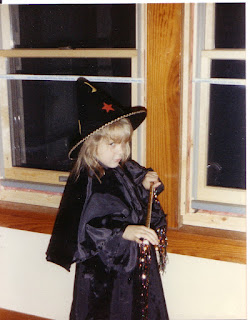 Whether it was because I was close to her parents or because they'd waited so long to have a baby or for some other reason altogether, Christie has always been pretty special to me.  And not just as a source of income, though being ten years older than her, I did a lot of babysitting.  She was my flower girl in my first wedding.

When that marriage didn't work out so well, Christie did a lot of babysitting for my older boys (who, of course, weren't older at the time) while I tried to put my life back together.

A few years ago, she started dating this guy, Jake.  He makes her happy.  They're great together, and he fits right in with our family: he won't shut up, and he takes abuse well. :)  Apparently I was one of the first to welcome him to the family; "welcome" apparently defined as "mercilessly tease".  Even so, when they got engaged, they asked....ME....to do the marrying.  You know, kind of like Joey did in Friends.

In the long line of scary things I've jumped into, pretty much the last terrifying role I expected to take on was wedding minister.  But my cousin asked me to...and I love my cousin...and I totally believe in them as a couple...and I couldn't figure out how to say no.

Did you know pretty much anyone can be ordained over the internet at the click of a button and legally perform wedding ceremonies (after jumping through a couple legal hoops)?  True story.

This whole thing stressed me out, but that didn't mean I couldn't have some fun with it.  I've spent the last year threatening Jake with not marrying them and making him do whatever I asked to keep me happy.  And I posted a slightly confusing status on facebook:

Of course, everyone knows me way too well to believe what I was insinuating, so most people assumed I was getting a new bike, and Bobbi and ajh figured out the truth.  All my joking around didn't change the fact that I was freaking out a little on the inside.  I planned every last detail of my second wedding, Jeff and I paid for it ourselves, and I can tell you that conducting my cousin's wedding ceremony was far more stressful.  When you get married in the church, like I did, there's a priest there to walk you through every step.  When you're the "minister", YOU are the one directing the show, so to speak.

Luckily, I had a friend to talk me down and make me laugh.

Some furious watching Princess Bride and Friends youtube clips internet research, come cutting and pasting, and then looking frantically for a printer that would actually print...and I had a ceremony outline that I was pretty happy with.  Now all I had to do was figure out what to wear get through it without throwing up or screwing up.

Both goals, I'm happy to report, were met.

If you only knew how nervous I was standing up in front of my family and all those people I've never met before, worrying that Christie and Jake wouldn't be happy with what I'd put together, worried that all the guests were judging and finding things wanting...I was sweating bullets, and not just because it was 80 degrees in the sun. 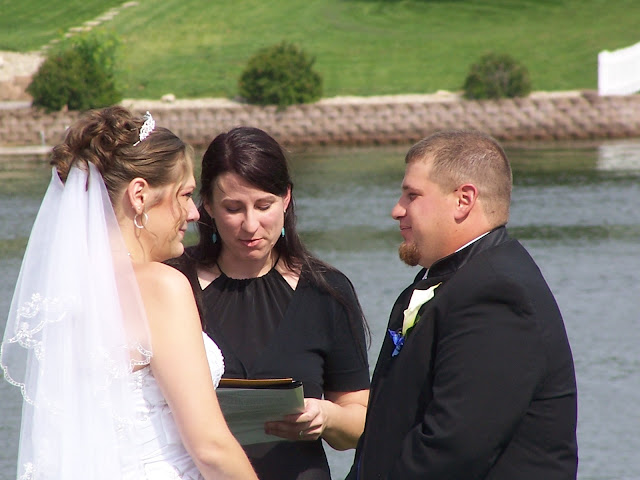 There were only a couple of mistakes, neither of which can be heard on video.  In having them repeat their vows after me, I coached Jake: "I, Jake, take you, Christie, to be my husba--WIFE!! wife!" and tried to give him HIS ring to put on her.  We all laughed and moved on.

In the end, people were very complimentary.  Once it was over, it was a pretty cool thing to have been a part of.   Jake's mom said she'd recommend me to anyone, and Christie's aunt even told me I'd missed my calling.  I'm not so sure about that, but maybe if this teacher gig doesn't work out I'll have something to fall back on. :)

Once my part was over, I could kick back, relax, visit, and dance the night away.  Jeff doesn't do anything but slow dance, but I had a blast dancing with my brothers and aunts and all three of my boys.  It doesn't get much better than that.
Labels: family new challenges online ordination wedding