Back in July, my family (minus Nathan, who was playing volleyball in Texas) headed up to Hannibal, MO, for the annual mud volleyball tournament held in conjunction with their Tom Sawyer Days.  My husband has been playing for well over 20 years, and this is my 4th or 5th year as a player.  I spent a lot of time as a spectator when we were dating and in the early years of our marriage.

We didn't get our camera out while we were playing, but my sister-in-law finally posted the pictures on Facebook and I thought I'd share a few.

You can see the duct tape belt Daniel is wearing. That mud can make your clothes heavy, and nobody wants a wardrobe malfunction in the center of town.  The past few years, though, I've just opted to wear a bikini bottom under my shorts rather than tape them. I did lose the shorts once, but the bikini bottom stayed put. Whew.


Some years the mud is terrible to move in, all thick and sticky on the bottom. This year it was great.  The bottom was pretty solid, so moving just required a lot of splashing.

Probably my favorite memory from the tournament (outside of good plays I made) was when Jeff dove in the mud and I ran over him to try to get the ball. 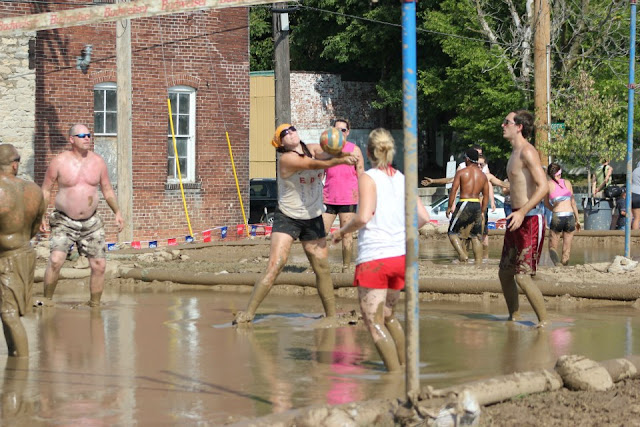 Mud volleyball is nothing like real volleyball, other than the ball.  There's not much finesse, there's no spiking.  The good teams fix each other's mistakes and keep the ball in play.  Good strategy includes finding and picking on the weak spot (often me) and placing the ball. 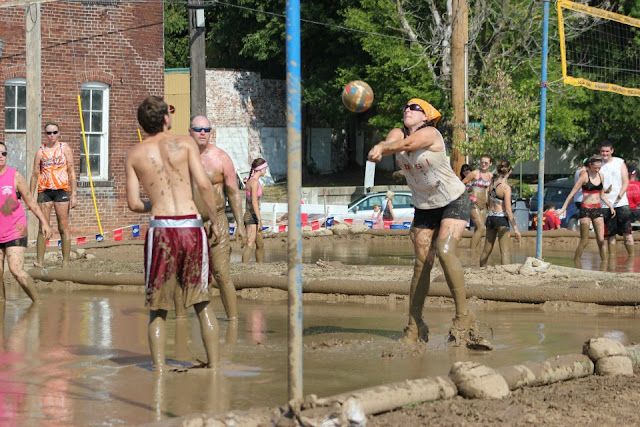 It takes a lot of endurance to keep going if you play a lot of games in one day.  Moving in the mud can wear you out, the heat is almost always atrocious, and there's no shade.  This year, the temperature on Saturday (the day most of these pictures were taken) got to 107.  It wasn't too bad when you were playing, but it was pretty terrible if you were spectating.

﻿ ﻿ Sunglasses help keep the mud out of your eyes, but they get covered pretty quickly.  The kids were our glasses cleaners. :)