Last November I got a chance to see my first cyclocross race and thought it looked like hard, scary fun.   Sort of a cross between mountain biking and criterium riding, but not that much like either, cyclocross (or CX) involves riding laps on a twisty, hilly course for a predetermined amount of time.  Often courses include barriers, mud, sand pits, and steep hills/stairs where riders have to push/carry their bikes.  While most racers have dedicated cross bikes, which look similar to road bikes, you can race on a mountain bike.

After Facebook-watching my friend Susan do a bunch of cx races and then actually seeing one for myself in November, I put cross on my list of things to try this year and then basically ignored it until my friend Doug emailed our tri club about volunteers to help with the Wild Trak Superprestige series.  The race days fell on football Sundays, giving me guilt-free afternoons to help with registration, and I always took my bike...just in case.

Like a little kid inching closer and closer to the department store Santa, each week I thought a little more about racing.  Last week, my friend Kristen really had me thinking about it because this past Sunday's race would be her cross debut, a whopping 5 days after getting her cross bike. Susan even offered to come early to ride a practice lap with me.  There were good reasons and support for finally making the leap, but in the end I decided to wait until next year to try.  But I still brought my bike to the race.

Kristen had lined up a couple extra volunteers to run registration while we raced, and somehow my friend Jim talked me into riding a practice lap...just to see what it was like.  Kristen and I rode onto the course together.  Grass, hills, turns...if you want a good mental picture of what a cross course looks like, grab a handful of yarn, ball it up in your hand, and then throw it on the ground.  And it was tough! I was breathing hard and wanting to throw up before we'd even gone a mile. That practice lap convinced me there was no way I was racing: "This is why I'm a volunteer!"

I put my warm clothes back on and ran to the bathroom before going back to help with registration, passing Doug on the way and telling him they were all crazy, there was no way I was racing: "That's the hardest thing I've ever done!"  Doug's advice totally changed my mind, though.  He said that he had butterflies in his stomach over how bad it was going to hurt, but he kept reminding himself that if he could get through the first lap it would get easier.  Such a light bulb moment. Just like running, where that first mile is always hellish, and then (usually) everything starts to click.  By the time I got back to the registration table, I was filling out my own entry.  (And big thanks to my friend Wade for making sure my bike was ready to go while I worked!)

Way too soon it was time for us to get ready.  As we waited to line up, I worked to establish a basic understanding of the rules, and more importantly, to find out when to get lapped.  See, if the leader lapped me before passing the start (starting a new lap) I'd only have to ride 3 laps; if I was lapped after the start, I'd have to ride all four.  Since I was seriously considering hiding under a bush for half of the race, this was important information.  I definitely didn't want to ride an extra lap for nothing. (Funny note: each cx race I've volunteered at has been a mini-reunion with the USA Cycling official from "that race", who turns out to be a pretty cool guy.)

Unlike the Crit, where the women's cat 4 race was only shared with the juniors, there were a lot of racers lined up:  Singlespeed guys, Cat 4 men, Cat 4 women, and juniors.  Kristen and I parked ourselves at the back of the women's group and half-joked about just riding the course and chatting for 40 minutes instead of "racing".

Divisions were sent off with 30 seconds between them, so all too soon it was our time to go.  I'm not a good starter, so within about 3 pedal strokes I was nowhere near the rest of the women.

That was a little discouraging but not surprising.  The first lap was not quite as terrible as the practice lap, and I was able to ride up the steep hill.

As slow and awkward as I am getting on and off my bike, staying on my bike -- no matter how slowly! -- is always going to be faster for me than dismounting and "running" up the hill. 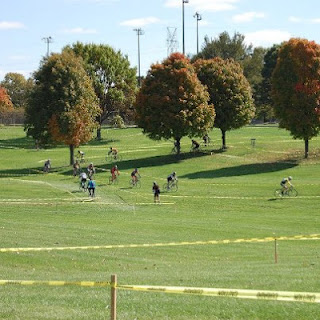 Because of the twisty nature of the course, it was hard to tell just how far behind other people I was.  I'd see someone ride past me and think I was close, then turn a corner and realize just how many turns separated us.  It was great to be able to see and cheer for my friends on the course, though.


I never worry about losing, but I do stress about getting in someone else's way.  This course, anyway, was way less stressful in that area than any mountain bike race I've ever done.  The 2-mile laps had us really spread out, and the wide lanes gave plenty of room for passing, so the only time I really worried about someone passing was on the tight (well, tight for me) turns.

During the race I was just trying not to die, which is obvious from the beautiful picture of me getting back on my bike after carrying it over the barriers.  It's so bad that I almost untagged myself on facebook, then thought, eh...that pretty much tells the story.


In retrospect, I think it was one of the most fun kinds of races I've done...more fun and way less scary than a crit, and less technically intimidating than a mountain bike race.  And wow, I'd be in great shape if I raced cx regularly.  You know, if my heart didn't explode.