I've got a DietBet starting next week.  I've had mixed success, winning one and not winning another (but I still lost weight, so I was pretty happy anyway).  If you're not familiar with DietBet, basically you "bet" $25 that you'll lose 4% of your body weight in 4 weeks.  Everyone in the bet who loses their 4% splits the pot.  Well, it's the pot minus the 25% that the website keeps.  Anyway, if you're interested in joining in, we'd love to have you.  Here's the link: Kate's DietBet

I followed last weekend's Frozen Feet half marathon with a fun bike ride with friends the following day.  We'd caught wind of some cool ruins in the area and wanted to go check them out.  Chuck and Lori made the drive over from St. Louis, and for once I didn't have to get up super early to meet up.  Somehow the fact that I only had a 5 minute drive didn't stop me from being late, and I couldn't use the good ol' traffic excuse.  Well, I still did, but I was lying.

Most of our route was paved roads, but since it was supposed to be an adventure, Patrick suggested we take the singletrack to the road.  That certainly was a adventure. I'm not super comfortable riding my cross bike on singletrack, and about a minute or so into the ride took a bad line over a fallen log and toppled off the trail into thorns.  I bruised the heck out of the heel of my hand, but otherwise I escaped unscathed...once Lori helped me up.

Once upon a time, there was a beautiful house, a moat, a train station, concrete statuary, fish ponds...it was quite a place!

It was really neat to explore something we hadn't even known existed and find all these pieces of the past, but reading about the history of the property later made me a little sad. A French businessman had built it for his wife, who sadly died young.  Later owners had to deal with trespassers and vandals, and the house eventually burned to the ground.  I was a little uncomfortable being on what is probably still private property, so I picked up trash (which, now that I think of it, is still in my pack) to make amends.

After leaving the "castle" grounds, we rode a little further to the confluence of the Missouri and Mississippi rivers and visited the spot where Lewis and Clark camped while getting their supplies together for their expedition.

The ride back was pretty much identical to the second part of my first ever 20 miler when I was marathon training, and I'm here to tell you that it's a thousand times on a bike than on foot.  After all the gravel and singletrack I've been riding, it felt glorious to sail along on pavement with a stiff tailwind pushing me along. The wind made staying in the 20 mph range feel easy, and spotting an overpass in the distance I wondered whether I could maintain that pace going over the hill.  "No way..." I thought, but I didn't drop to 19 mph until the very top.

That was fun, and following the next downhill I kept pedaling in the big ring and hit 30 before turning off at the stadium and looking for a trash can for the garbage I'd picked up earlier.  The weather had warmed up considerably from the morning's freezing temps, so we couldn't take the singletrack back (and I wouldn't have anyway because my hand was pretty sore).  Instead we rode the paved trail up through campus and back to our cars.  Pretty great way to spend a January morning.

Knowing I'd be feeling pretty crappy for a few days afterwards, I hit the gym before my Tuesday dentist appointment.  I've been meaning to start weight training again, and I finally got around to it and then remembered how much I love it.  I'm aiming for three days a week, though I only managed two last week.

The nice thing about this crazy polar vortex deal we've been living with is that previously cold temperatures now seem downright balmy.  In fact, yesterday when we were leaving for school I reminded Jacob to put on his coat: "It's 7 degrees out."

"That's not that bad," he responded.

It wasn't quite that cold on Saturday morning, but the first thing I heard after my alarm was the pouring rain.  I laid there in bed considering whether running in a downpour would be more funny or more miserable.  Thankfully the rain in St. Charles was more of a drizzle, and while I'd worried a little about the forecast freezing rain, the temperature when I left home was 37 and the roads were clear.

I met up with Mickey and Corey so that we could run some trails.  It must have been a few degrees colder in St. Charles, because the parking lot and sidewalks were covered in a thin veil of ice, turning my "run" into more of a cautious shuffle.  Never particularly brave, I'm especially nervous right now about the possibility of falling and hitting my mouth.  I was looking forward to getting to the Katy Trail in the hopes that its rougher surface would be less slick, but it was pretty treacherous as well.  Wherever possible I ran in the grass alongside the trail.

Conditions shifted from icy to muddy once we hit the singletrack, but I was a little more comfortable with that.  I spent part of the time talking to (interrogating) Corey, who I'd never met before, and most of the time working to keep up with the guys.  "Oh, we're having fun now!" Mickey laughed as we all slid around on the mud, but it actually was a lot of fun.  As long as you were running the rain didn't make you too cold, and working to maintain footing kept me from thinking about how long I'd been running.

We looped back to the parking lot after an hour or so to drop off Corey and then headed to Bangert.  Both of us had brought our screw shoes and considered changing into them at the cars, but Mickey decided it had melted enough that the Katy should be ok...which made it slightly hilarious when he slipped and fell pretty much as soon as he stepped onto its icy surface.

We only had about 40 minutes left before I needed to head home to watch Jacob in the Pinewood Derby (which, unfortunately, he placed in, which means he'll go on to Districts), so we ran one loop at Bangert, including the little bridge from our snow ride "controlled fall" picture.

We made it back to the cars with 9.5 miles on the Garmin. Despite the ostensibly crappy conditions, it was a much more fun run than last week's race.  It's weird how running can feel so blah sometimes and so wonderful others.  The slick conditions made me particularly glad we'd opted to run instead of ride, and I was still going to get my bike on for the weekend, because Sunday was the...

This was the third annual Team Virtus Super Century, and I'm not at all ashamed to admit that I'd really hoped no one would remember it this year.  The previous two years (2012 and 2013) were absolutely miserable.  When Luke posted about this year's sufferfest, though, I couldn't miss out, and along with quite a few like-minded sickos (Aaron, Luke, Casey, Christina, Scott, Frederik, Susan, and Fletcher) started at 8 a.m.  The madness spread further than we'd realized, though, as Scott had conscripted 8 cyclists from Peoria, and throughout the day we kept hearing about people who did alternate events (100 minutes, 62 minutes, pushups and crunches, etc). Mickey came up with the most creative variation, a 12-hour odyssey of flight delays and cancellations, culminating in the inability to participate and a fun new nickname.

One of the fun features of the Super Century is the ability to suffer "alone together" as we all ride our trainers in isolation but complain about it on facebook and twitter. 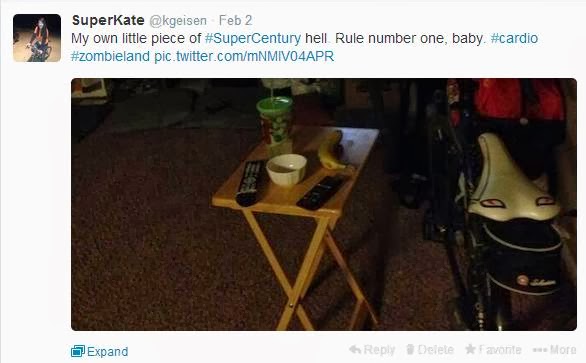 I started out watching Zombieland, which has become my Super Century tradition. I hate horror movies, but Zombieland is funny enough that it doesn't qualify.  I'd planned to follow that up with A Thin White Line, a movie about the Iditarod bike race, but our home internet sucks and Vimeo wouldn't load for me.  Instead, I ended up watching The Cutting Edge.  At least they both deal with cold-weather sports, right?

Technical difficulties aside, I was finding this year's Super Century surprisingly...not difficult.  Pedaling felt weirdly easy, even after adjusting the resistance on the trainer and shifting into harder gears.  Sitting, while not particularly enjoyable after a while, was never miserable.  My back stayed out of the complaint department.  The miles were flying by.  Even considering lack of wind resistance and the relative ease of riding a trainer instead of gravel or singletrack, it was very weird.  I tried to figure out what was wrong...was the computer set to km instead of miles (no), was the wheel size setting wrong (no)? 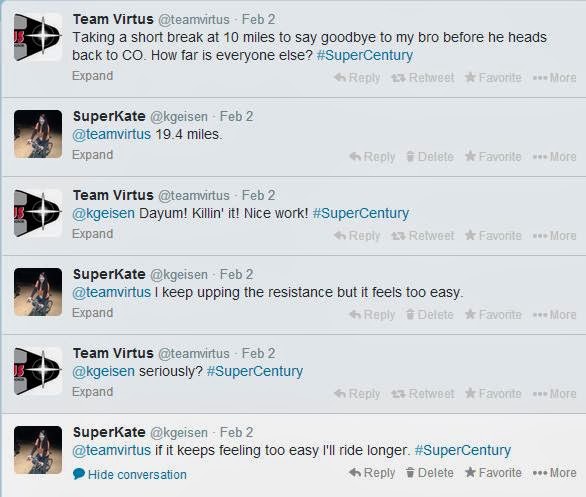 Besides Zombieland, my other Super Century tradition is a big bowl of cookies n' cream ice cream at the midpoint, but on Sunday I didn't stop until mile 40 because I was already considering riding a full 100 miles instead of stopping at a metric century (62 miles).

I hit 62 miles way sooner than I ever have before, and I really didn't feel like I'd suffered enough to be finished.  I mean, I was riding hard and sweating like crazy, but it wasn't that bad.  I decided to ride for another hour and see where that put me.  I wasn't sure how long I could get away with monopolizing the big TV on Super Bowl day, but actually this year's ride didn't take me longer than previous ones if you counted all the time I spend off my bike stretching and taking breaks the past two years.

In the end, my odometer read 100 miles.  Over the course of 4+ hours my pace would've been 23 mph.  Honestly, I question that distance -- I don't think I'm that fast for that long, but I can't figure out where the problem is with the computer...unless it's that you can't necessarily trust a $12 bike computer. For me, the bigger story is that I had a really good 4.5 hour trainer ride, a hard effort where I wasn't miserable.  Compared to the previous two years, that's huge.

Of course, there's a reason it should be so much better.  Out of curiosity, I looked back at my stats on Daily Mile to compare my bike mileage over the past few years: