I'm not much of an idea person, so I'm really lucky to have friends who come up with awesome plans and then let me tag along.  It seems to work out pretty well: I get to avoid driving, see cool new places, and have someone along to call the paramedics, and they get comic relief, lots of breaks while waiting for me, and the ego boost that comes with being the stronger rider.  Last April, one of the cool new places "we" discovered was Massas Creek Road, which Chuck and I rode on a route he'd devised after Tour of Hermann.

We both loved Massas Creek Road, despite (or because of) amounts of gravel that at times made it seem we were riding in the creek bed instead of just across it.  There were plenty of creek crossings as well, some that were ridable and some where we carried our bikes through knee-deep water.  It was a blast.

We've talked a lot about going back to Massas Creek, so when Mickey came up with a gravel route that included the nearby Lost Creek Road, I was all for it...even though I had an idea of what we were in for. Wet feet in April...no big deal. Wet feet in February, however, had the potential to be a little less pleasant.


It's a measure of just what a follower I am that, despite what I knew, this assurance was good enough for me...even when Saturday's glorious warmth was followed by a steep overnight drop in temperatures.  There were all kinds of cool things going on in St. Louis, so in the end it was just Mickey and me who set off on the 30 degree morning for a 45-mile gravel loop.  I'd forgotten to put on a buff to cover my neck and face from the wind, so my face was pretty cold until it got numb.  Overall, though, once we got going the temperature felt fine.

The first few miles were pavement, and these were followed by a nice stretch of well-packed gravel.  Even though I should be all about getting lots of practice riding on rough roads, I was still thankful to be rolling along smoothly.  Mickey, on the other hand, was ready for something a little more challenging.  "I hope we get a little more gravel," he mentioned.  As if some fairy gravel godmother was granting his wishes, we rounded the next curve to much chunkier gravel and the first creek crossing.  Soon after that we got our feet wet the first time.


The morning was pretty gray, but the scenery was beautiful.  The trees bordering the road were liberally blazed with the purple that indicates private property, which is a real shame because it looked like there was a lot of cool stuff in the woods to explore...hills, rock outcroppings and overhangs, reentrants...I spent a lot of time trying to envision how the area would look on a topographical map.

Counting back now on the GPS map from the ride, it looks like there were 19 creek crossings on the way out...I don't remember there being quite that many, but we rode through a lot of water.  Some of the crossings were short or shallow enough to ride across, but many of them I'd get part way across and then end up walking.  I remember hitting a fairly short one with all kinds of confidence, only to realize once I hit the water that it was quite a bit deeper than I'd expected.

As you can imagine, our feet were pretty wet.  I was wearing one pair of merino wool socks, my bike shoes, and some (non-waterproof) shoe covers.  Even though I was soaked, the shoe covers at least cut down on the chill by blocking wind.  I wasn't particularly comfortable, but I wasn't miserable.  Mickey, with no shoe covers or even plastic baggies inside his shoes, was less lucky, and I'm pretty sure he was freezing.  And it only got better.

We'd just crossed one short creek crossing when we rode a brief stretch of gravel and then came upon the section of road in the picture below.  The creek between the raised gravel bars? That's the road.  I was standing at about the midpoint to take this picture, with a similar amount of underwater road behind me. Since my feet were already soaked, I didn't bother with walking the dry gravel, and I actually made it about halfway across before losing momentum and putting down my foot.  Mickey made it almost that far before stopping, but just as he unclipped his right foot, his front wheel hit a deeper patch of gravel and threw his balance to the left.  Still clipped in on that side, he toppled over into the water.  The really, really cold water.

I'm not sure he appreciated the fact that I laughed my ass off, but he got me back by hopping up before I could get a picture.  To help you visualize how it looked, though, let me remind you of this little gem from January:

My friends joke (well, it's not really a joke because it's totally accurate) that you can tell how I'm feeling by the amount of talking I'm doing.  When I get quiet it's usually a sign that I'm not doing well either physically or mentally.  By the same token, though Mickey wasn't complaining, the total lack of pictures he took might indicate how cold he was.  Either that, or he's getting tired of playing blog photographer. ;-)

We rode a few miles further down the road, passing more cool scenery and one section with trees marked with the blue blazes that signify public land.  I was excited to see a spot that could be explored (a future date) without trespassing.  Looks like it's an old cemetery, so you know we're going to have to go check it out.

On one hand, I was thoroughly enjoying the ride.  There's something awesome about being out in non-ideal weather and making it work for you, in doing something as stupid as riding across creeks in freezing temperatures, and in seeing new places from your bike.  On the other hand, I was slower than I felt like I should be (seems like every ride lately features me thinking, As much as I'm riding lately I should be stronger/faster than this...how am I going to finish Dirty Kanza?), and when I thought about it I was pretty cold.  Because of this, when I caught up with Mickey and he brought up cutting the ride short, I was entirely un-heartbroken.

In fact, even though I hadn't even considered turning around, as soon as the decision was made I couldn't wait to get back to the car.  The 12 miles back seemed to take forever. Of course, the ride back was complicated by our inability to shift gears.  At first I blamed my cold hands; when they're numb it can be difficult to use the right pressure to get my double tap shifters to move the chain the right way.  I reacted exactly the way my husband does when the computer is moving too slowly...repeatedly hitting the non-responsive levers.
Eventually I realized that ice coated my bike, freezing over the derailleurs and rendering my bike a virtual singlespeed.  A glossy frozen sheen covered the lower tubes, and chunks of ice built up between my cranks and feet. Unfortunately the gear I was left with was too hard for the climbs, a little low for the flats, and way too low for the downhills.  Despite my nonresponsive derailleurs, I couldn't keep myself from trying over and over to shift, and eventually I got a gear or two back, but only when my bike would randomly shift on its own.

I was thrilled to hit first the smooth gravel and then pavement.  We'd flipped the original route to ride Hwy U early in order to avoid traffic.  Since we changed to an out-and-back instead of a loop, we ended up hitting U again when it was considerably busier.  Thankfully, the drivers were unfailingly courteous, passing safely and giving us wide berth.  The highlight of this section was definitely passing a pasture full of cows that ran along in a group beside us as we passed.  It reminded me of a similar scene during my first attempt at Dirty Kanza.


By the time we got back to the car I was freezing cold and really glad to be finished.  Had we followed our original plan, we'd have only been about halfway done.  Definitely a good call to stop early, and one that I wouldn't have been smart enough to make.  Sometimes I let myself off way too easy, and sometimes I'm so wrapped up in not being a quitter or complainer that I stay committed when maybe I should question what I'm doing.

My first order of business after climbing off of my bike was to get into dry socks and shoes, but I couldn't do it.  My shoe covers were literally frozen solid, and with my numb hands I couldn't pull them off of my shoes. Thankfully Mickey took pity on me and pulled them enough that I could take them off; otherwise I'd have had to let them thaw in the car.

All in all, while it wasn't the ride we had planned, I'm glad we went.  Even if our feet turned to ice cubes, it was a great day and is going to be a fantastic route...when the temperatures warm up.  Mickey (may have) learned to listen to my occasional voice of experience, I learned that blindly toughing it out isn't always the best choice, and we picked up a few additional pointers: 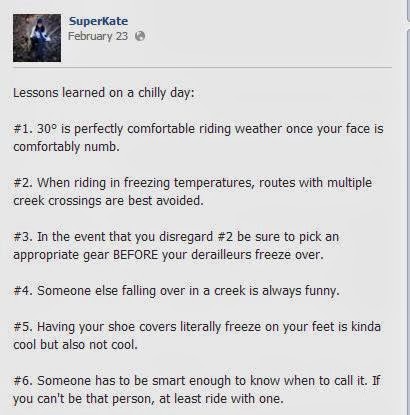