My very first mountain biking experience featured a fall that resulted in surgery to repair a badly dislocated thumb. This was the beginning of both an lasting love affair with mountain biking and an enduring trend, one where all of my worst crashes are on decidedly non-epic terrain.

It's likely that the main reason for that relates to my lack of confidence on more technical trails and my willingness to walk anything remotely scary. I'd be a better rider if I could just turn off the fear center in my brain, but failing that I signed up for a mountain bike skills clinic. Two of them actually: a beginner clinic in the morning and an intermediate one in the afternoon.

We had to lower our saddles as far as possible and put flat pedals on our bikes instead of the clipless pedals I normally use. I (read: Jeff) put on the set we'd just taken off of Jacob's bike. They're actually a great set of pedals, but at least once every ride he'd bash his leg with them and throw a fit. I replaced them with the cheapest set of plastic pedals my LBS had, conveniently leaving me with a spare set for Sunday's clinic.
I've ridden clipped in for a few years now, so being on flats and having to stand the whole time was a very weird sensation. The beginners clinic focused on things like vision, braking, body positioning and movement, front wheel lifts, and cornering. It basically confirmed what I already knew, which is that you (I) can have ridden lots of miles of singletrack without being very good at mountain biking.

I was excited and nervous about the intermediate clinic, which focused on higher-level skills like rear wheel lifts (which I can do clipped in but had no idea how that worked on flat pedals) and going off drops.  We had a few new people in the afternoon, so we spent the first few minutes reviewing the skills we'd practiced in the morning, all of which felt more natural this time around.  Then it was time to learn about rear wheel lifts.

Jay broke it down into steps for us, demonstrated it a couple times, then had us try.  Basically (and I'm explaining it poorly, but I'm no MTB coach) you have to push down on the bars, pull up, point your toes down in the pedals, and kind of do a donkey kick with both feet. I'm sure I wasn't the only one with a dubious/nervous look on their face. "Remember," he told us, "even an inch off the ground is a win."

"Not crashing is a win in my book," I mumbled.

On my first attempt, I rode into the practice area, did the push/pull with the bars, and pushed both feet back.  Somehow my right foot slipped and went behind the pedal, raking my shin against the pins on its way to the ground.

I had enough time to reflect that Jacob had been right about those pedals hurting before looking down at my leg. The pedal had opened up a big gash in my shin and blood was already running down to my sock. I turned to look at my friend Brianna, and I'm not sure what my face actually looked like, but in my brain it was something like "Holy shit. Look what just happened." 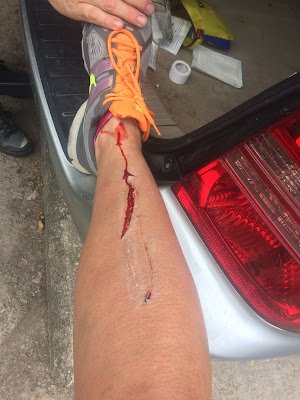 I was pretty sure I was going to need stitches. Jay bandaged me up and asked if I had someone who could take me to the doctor. I texted Jeff, who was an hour away, a picture and then called my Virtus teammate Bob, who lives about 10 minutes from Castlewood, to ask if he could  take me to an urgent care.   Then, once I was all checked in, he rode his bike back to the park to pick up my car. I have awesome friends.

I was a little nervous about just pulling up to some random immediate care facility, but it turned out the doctor on duty was a general surgeon. She was super nice and explained to me that usually with shin lacerations unless muscle/tendon was involved they'd just clean it really well and bandage it up. Then she unwrapped my leg: "....but in your case, you've bought yourself some stitches!" 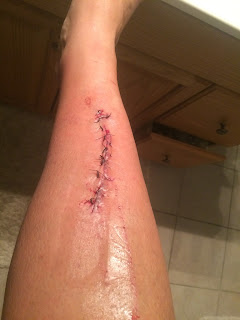 A whole lot of lidocaine and a bunch of stitches later and I was on my way home. The stitches come out in another few days and I'll probably be pretty gun-shy about banging my shin on anything for a while, but I'm in the clear for the mountain bike race scheduled for the end of October, so I'm happy. I've had several friends this year who've had injuries serious enough to force them onto the sidelines for months at a time. All I'm out is a little blood, a $75 copay, and a couple of hours in a waiting room, and in return I get a nice scar and a good cautionary tale of the dangers of mountain biking...in a flat field...less than 50 feet from the parking lot.

On a related note, I can make you a good deal on a pair of slightly used platform pedals.
Labels: injury mountain biking stitches