Will ride for food


As recent events prove, one of my main motivations to get on my bike is a mid-ride meal. Stopping halfway through to sit down and eat makes it easier to mentally break the miles in half. Riding 42 miles to lunch and then back again sounds so much gentler than an 85 mile ride; the return mileage never really enters into my head...until we turn back, anyway.  The power of food was much in evidence over the past two weekends, as was the quick-change nature of St. Louis-area weather.

A Long Way for Lunch

First up was the third annual "long way to lunch" ride from the St. Charles area to Hermann, MO. Nine riders, including several of Momentum teammates, two of Mickey's adventure racing teammates, and one unaffiliated friend made the trip. Four foolhardy souls began in St. Charles, and of these, only two ended up completing the entire 130 mile round trip. The rest of us chose starting points further along the trail. Mine once again was Matson, giving me an 85 mile day if I finished.

Despite returning the ride to its November roots (or maybe because of it...our November weather during the first ride was unseasonably warm), we had fantastic riding temps. The morning started out chilly, but by 8:34 when the group reached me, temps had already risen to nearly 50 on the way to a mid-60's day.  Perfect for a ride!

I barely said my hello's before Mickey shot off for Augusta, determined to stay on his predicted timetable (eye roll: engineers!) at least until we picked up the last two riders.  I spent the seven miles between trailheads struggling to keep up and wishing I, too, had just started further down the trail. 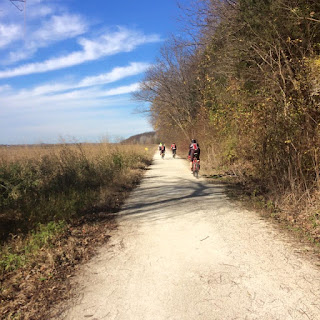 Once we were all together the need to stay on schedule diminished, but we had a pretty good spread between the speedy front and the caboose (where I spent much of the day).  Scott and Robert were along for (I think) their longest gravel ride yet, having started with Mickey and Mike in St. Charles. 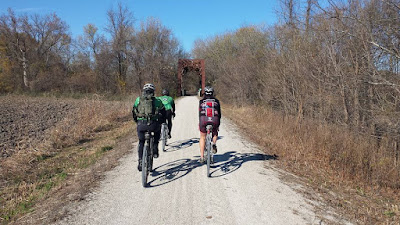 Robert had upped the challenge factor by riding his mountain bike with a fully loaded pack for a little AR training since he'll be doing his first adventure race at the upcoming Castlewood 8-hour.  This meant that a) I could keep up with him and b) I could spend a large portion of the ride talking with him and Scott about how awesome adventure racing is and how much he's going to love it.

We took a quick-ish break at the Marthasville trailhead and then continued onwards. As is tradition on the lunch ride, we were facing a decent headwind, but I took comfort in the anticipated return-trip tailwind.  After the Marthasville stop, I finally started feeling like my legs had a little more pep and was able to maintain a faster pace.

We had just passed the Massas/Massie Creek bridge (the name depending on which side of the creek you're on when you read the sign) when I felt the telltale thump of a flat tire. Grrr. After years of trouble free riding (a new set each year) on my beloved, bomb-proof Continental Travel Contacts, I've been plagued by flats after double flatting at 24 Hours of Cumming (a race report still waiting to be written). Every flat has been on the front tire, which I have checked (after the first flat), the bike shop checked (after the second), and Mickey checked (after the third).

I'd been riding with Sean, and he offered to change the tire, but since I really didn't know him I didn't want to be that girl who couldn't change her own tire, so he just provided helpful commentary through "the slowest tire change in history". I did let him finish putting the tire back on the rim, and then Mike and Mickey ended up airing it up, so it was hardly a solo effort. 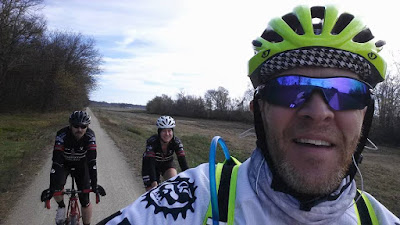 Shortly after finishing up my tire we came across Scott and Robert, who were performing first aid on Robert's rear cassette. Once the roadside repairs were completed, we all rode into McKittrick and onto the highway for the last 2 miles. Rather than ride over the Missouri River bridge in the traffic lanes, Mickey turned onto the side trail that led to the pedestrian/bike lane.

I took a more cross-country route and beat him onto the bridge, laughing at my victory and expecting him to catch me at any moment, but when I turned onto the restaurant's street I was alone. Mike caught up and told me that Sean had flatted and Mickey had ridden back to help out, so we waited at the corner to make sure the guys knew where to go.

Lunch was good, other than the disappointing revelation that Wings-A-Blazin' no longer serves margaritas. I'm voting for the Mexican restaurant next year.  We enjoyed a leisurely, conversation-filled meal before begrudgingly (on my part, at least) heading back. The long-awaited tailwind was absent; instead, we had a noticeable head/crosswind. I had felt better than I'd expected to on the way to Hermann but had the opposite experience on the way back, spending most of my time drafting Melanie and Sean, counting down the miles back to Matson and wondering why I hadn't picked a closer starting point. 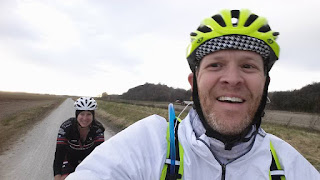 Breezy conditions aside, it was a gorgeous day for a ride, and I was glad I hadn't let the cool morning scare me away. I arrived back at Matson glad to get off my bike but feeling like I could have continued on if I'd had to. Not bad considering this was my longest ride (distance, anyway, not time) since August 8.

A Shorter Way for Brunch

A week later several of the same group reconvened on the Katy, wearing considerably more clothes. Some of my Momentum teammates had planned to ride to Dutzow for pancakes and then back again. Mmmmm...pancakes.   Mickey and I had originally intended to go mountain biking as prep for the upcoming Castlewood 8-Hour, but recent rains scuttled those plans.  Instead we used the pancake ride to test out his new tow system and log a few more miles.

Temps were below freezing as I headed towards the Page bridge parking lot, and I was hoping they'd stay that way so the Katy would be hard and rideable.    They didn't, and it wasn't.  The trail surface was soft and spongy, and any drafting was accompanied by varying amounts of gravel spray to the face.

We met up with Jeff, Melanie, and Joe about 7 miles in, and everyone else parked further on and then rode back to meet our group.  Even in sub-optimal conditions it was nice to get to catch up with my gravel friends, some of whom I've barely seen since Dirty Kanza (and my consistent training) ended.

Just past Matson ("seems like I was just here"), I got another flat tire (the fifth since August 8, if you're counting), but we finally found the culprit: a small piece of a staple had lodged in the tire and was j-u-s-t poking out if you held the tire inside out and looked really closely. Without tweezers or pliers it took a long time to get it out, but my awesome teammates persisted and hopefully now I can look forward to riding my gravel bike without any more flat tire interruptions. 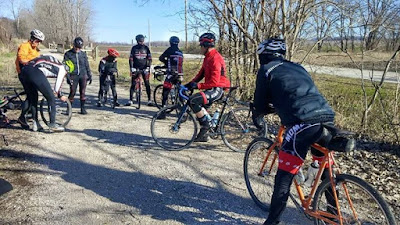 Everyone was pretty cold as we got going again; the temperature was fine as long as you were moving -- in fact, most of us were probably slightly over-dressed, not having had the opportunity yet to refine our cold-weather gear choices -- but too chilly to stand around comfortably.

This section of the Katy includes some really beautiful scenery right up against the bluffs as well as the more exposed Nona section, which is mostly just fields and wind and, on this day, mushy trail. As I slogged along, I longingly eyed the paved surface of Augusta Bottoms road.  Catching up with the group ahead of me, I cast my vote for riding pavement back where possible, only to be told that had already been decided.  Yes!

The Dutzow Deli was a welcome mid-ride oasis, and their pancakes and hot chocolate did not disappoint.

The trip back, featuring a glorious paved stretch instead of the soggy Nona segment and minus and flat tire issues, seemed much faster. We lost about half of our group when they stopped at Augusta Brewery for a drink or two; while I'm almost always up for an excuse to stop, Augusta came too quickly for me to want a break there, and I still had a turkey waiting at home to be cooked.  Doug, Anne, Sean, Mickey, and I continued on, taking a quick side trip to check out the scenic view near Klondike Park.

As we waved goodbye to the others at the Research Parkway trailhead, I felt the familiar regret at my poor (read: farther away) choice of starting point, but with another detour onto pavement for the dreaded Greens Bottom section the remainder of the ride went pretty quickly and I actually felt pretty good making the climb back up to the parking lot.

Back to back long ride weekends, and I don't even have a big gravel race on the horizon! This Thanksgiving, among other things, I'm thankful for fun teammates and good company to pass the miles.
Labels: Dutzow deli Hermann MO Katy Trail long ride Momentum Racing motivation social ride