Every year my pre-Pere Marquette Facebook post goes something like this: "Oh my gosh, I haven't trained. I'm going to die. This will be my worst year yet."

And most years my post-PMETR post is more like: "Hey, that went way better than I expected! I was close to my PR. If I train next year I could really have a good race."

It's not on purpose -- I really do expect to have the terrible race I deserve. Still, it's been such a pattern that this year I considered just quietly doing the race instead of posting about it beforehand (imagine that!), but my run mileage was abysmal this year, even by my modest norm. In January through November of 2016 I ran 181.3 miles; the total for the same period of 2017 was 96.6. I only had four months with double-digit mileage, with a high of 17 miles in November and a low of 3.1 in July. My longest run this year was 8 miles, back in January. It seemed unlikely that Pere Marquette's 7.5 miles could be anything but a train wreck.

Luckily, I run happiest with low expectations. My only real worry about the day was wardrobe-related. I know how to dress to run this race in the cold, but I wasn't sure what to wear to hike it, which I thought was a distinct possibility. I settled on tights and two long-sleeved shirts, plus a hat and gloves.

For perhaps only the second or third time in my history with this race I actually made my wave start on time. I ran the lovely flat beginning and made it about as far as usual on the first climb -- my first indication that the race might not be a total disaster.  I took the uphill at a fast hike and started running again as the trail leveled out, watching for my friend Robin, who always sets up with her camera on an uphill. She wasn't where I expected, instead waiting on a later hill, giving me the incentive to speed up and pass the guy in front of me.

I got to talk a little with my buddy JB, who's much faster but ended up in a later wave when he got into the race at the last minute, before he took off, and then I ran on my own for a while, marveling at how not awful I felt. Later on I also got to run some with another Jim, one of my long-time tri club friends, and in the last couple of miles I ran with a third Jim, this one an adventure racing friend who I met at the Skippo a few years ago.

Once the trail turned away from the river and the wind I quickly regretted my extra shirt and ended up carrying it for the next 5 miles. My gloves were the next to go, and I contemplated losing the hat but opted to wear it because, you know, hat hair.


The trail was in great shape, still rutted out in  spots but overall clear of leaves and relatively easy to run with confidence. Despite this, I still managed to run right off it at probably the widest, flattest, smoothest section, landing on my feet in a knee-deep ditch.

That minor mishap was the most noteworthy thing that happened for the whole race. I could write hundreds more words, but the upshot would be that I had a really good race, less than a minute off my PR. 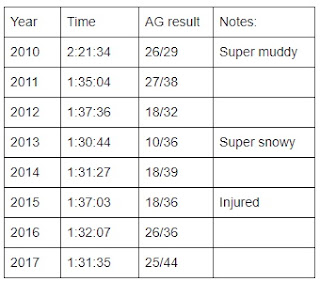 Why? I have no idea. I did a lot more running the first four years that I did this race and was thinner, too, but there have been a lot of adventure races and a lot of time on the bike since then. Maybe all those singlespeed miles helped, maybe these hills were less of a big deal after some of those I've encountered in recent races (um, don't get me wrong, I still walked all the big hills!), maybe there's something to be said for walking the dog a lot. Who knows?

So I went from expecting a personal worst to wondering if I could have pulled off a PR this year, and that's another maybe. Falling off the trail cost me some seconds. I stopped briefly at each of the three water stops to drink and throw my cup in the trash. I probably could have started running again sooner after an uphill, I probably could have pushed a little harder on flats and downhills. I could have not eased up on my sprint during the last quarter mile.

Still, my heart rate data shows a pretty consistent effort, and I was happy with my time. While they say almost only counts in horseshoes and hand grenades, I guess that it's just fine for me, too. At least this year.
Labels: Pere Marquette endurance trail run race report trail running