Lake of the Ozarks State Park
April 27, 2019
After killing it with training for mid-January through March, life in all its messiness got in the way in April. I got to watch a bunch of Jacob’s volleyball and frisbee games (good) and deal with some major stress by curling up on the couch and watching tv or sleeping (not particularly productive), so I went into The Epic 150 with a total of ~130 miles for the month. I’ve learned, though, that my body will generally do what I ask it to, so I lined up with the expectation of a long, hard, good training day. And in the end, it was all of those things. 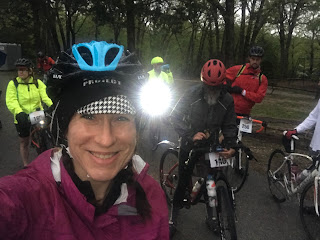 We started with 3 hours of on and off rain, but the temps were nice and the rain wasn’t crazy (and totally justified my decision to not clean my bike pre-race), so NBD. It was really windy, but for most of the day it wasn’t a headwind (until for about 20 miles it was

) and we had one longish stretch of glorious tailwind. The hills were big and relentless. There aren’t many flat spots on this course!
And yet, for the first 80 miles, I thought, “I expected this to be harder.” I mean, it was SO hard and I was barely staying ahead of the 10 mph cutoff, but I’d heard how awful the hills were, and I was riding them. In the first 80 miles I only walked part of two hills. For once I did a good job of shifting and using all of my gears and taking advantage of the super easy granny gear I have. Lots of times I started riding uphill figuring, “I’ll just see how far I can go before I have to walk,” only to make it to the top. 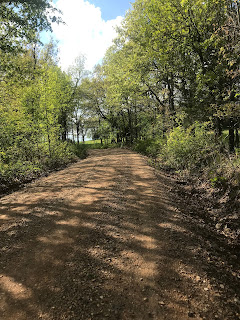 And on the downhill side, all I could think was that my Team Virtus Adventure Racing teammates wouldn’t recognize the girl who used to be afraid to top 20 mph on a descent. My bike is so confidence-inspiring going downhill, especially with new brake pads (thanks, The Cyclery and Fitness Center).
Of course, you can’t say something like “I thought this would be harder” (insert TWSS joke) in the first half of a race without eventually eating your words, which did for the last 70 miles. It got hot, there was a ridiculous headwind, and though I’d conquered the hills I’d heard about, there were many more for me to meet. My eyes deemed them unimpressive, but my tired legs didn’t share that assessment. 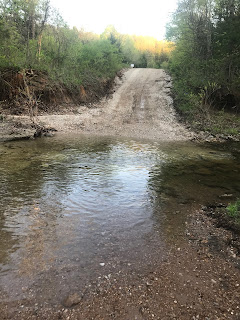 The 40 miles between CP 3 (mile 81 - “halfway there!”) and CP4 (mile 123 - “28 miles left, it’s like a medium Trailnet ride”) were pretty bleak. Thankfully, after 123 solo miles where I occasionally rode with some really cool people but spent most of the time alone, Chuck caught me at that final CP, and I got to ride that last leg with my buddy.We rolled in dead last after the announcer and most riders were gone, but the finish line, the race directors, and several of our friends were still there (thanks BOR and Mickey!) The food truck was also still there, which is why I have no finish line picture.

#priorities
Overall, it was a really encouraging day. One of these days maybe I’ll train enough that I can stay strong for an entire race, but at least my weak is a stronger version of what it used to be.