It rained overnight, accompanied by lightning and distant thunder. Bad weather always leaves me feeling scared and exposed when camping, and in full-on fragile flower mode I swore to myself that I wouldn't spend another night outside on this trip. For context on what a big baby I was being, this was only my fourth night outside and the second time it even barely rained. I was hardly roughing it.

I woke to a dry tent and my phone lying on my chest where it had dropped mid-post the previous night. It was another tearful morning. 345 miles to go, a distance that had seemed like nothing on Saturday, now felt impossibly far. Overall I'd done well staying in the moment -- There is no tomorrow, there's just me and this road -- but that control had begun to shrink along with the mileage.


I left the campground just before 8, planning to hopscotch to Ponca (50ish miles) then Compton (another 7) and see where I ended up from there. I really wanted to get all the way to Witts Springs, but that was over 100 miles and I was focusing on one food/lodging destination at a time. Forget plan A and B...I had a whole alphabet of backup options.


The eleven miles to my first refueling option in Kingston took nearly two hours, and the route for that time was pretty tame. My legs felt empty and, despite eating at the campground and while riding, I was starving. As I wrote from the C-store: "So far today I've had a 500-calorie honey bun, a 400-calorie Starbucks Double Shot [actually those are only 200 calories], half a bag of gummy bears, and a 200-calorie cookie. My body is ravenous. Hopefully second breakfast helps quiet the beast."

I ordered breakfast at the counter and packed every nook on my bike with a new assortment of packaged junk food. After lingering over breakfast, I eventually ran out of reasons to avoid my bike, but it took me an hour to do so.

I don't really remember much from the day except that, despite a stormy forecast it was beautiful. Beautiful and warm. Luckily I was treated to nice breezes and many shady roads, but the heat definitely took its toll as did the climbing. The hills weren't long or steep, but they were relentless and demoralizing. It was all I could do to slog my way through.

Five hours in I sailed down the first substantial descent of the day, crossed a low water bridge over the clearest water ever, and was greeted with an immediate climb. I carefully laid my bike down beside the road, sat down on the edge of the bridge, and contemplated the life choices that led to this idea of "fun".
I think that hill was 2 miles of hike a bike, alternating between scornfully telling myself I shouldn't need to walk and relief that I wasn't trying to ride it. Once at the top I enjoyed 5 miles of ridgeline riding on the way to a water stop at the Headwaters School. Honestly, "enjoyed" is probably a stretch, but it's been a long time since then, and it at least looks pleasant on my Strava elevation graph.

The road got a little busier as I neared and then passed the trailhead for the iconic Hawksbill Crag. Before the race I'd thought I was the type of person who would stop along the way and check out the cool sights I passed; after all, it wasn't like I was "racing". As it turned out, though, I'm the type of person who needed every bit of energy and motivation just to get through what I had to do, and there was nothing left for extras.

As I neared Ponca, along with watching out for cars and choking on the gravel dust they threw into the air as they drove past, I was also trying to figure out where the Boxley Valley selfie spot was. I had the approximate (and, if it was like most of my notes, incorrect) mileage written down, but I didn't see anything landmark-ish. Finally, sick of guessing, I stopped and took a picture above A valley. Was it THE valley? I didn't know or care. (Also, apparently there was a big Boxley Valley sign somewhere. Never saw it.)

And then I went from dusty and demoralized to terrified as I began the descent to the Buffalo River valley.
Dropping into Ponca on that long, steep, winding gravel downhill was the most scared I've been on a bike. 100 feet per mile is a long of climbing where I live, so while I'd gained some downhill confidence on this trip, losing nearly 1,000 feet in two miles was way out of my comfort zone.

A few miles later I crawled into Ponca.  I'd originally planned to ride at least to Compton (another seven miles) and camp there, but it was so hot and I was so frustrated about riding so badly that I couldn't face the big climb out of the valley. I stopped at the very first place I could and rented the cheapest cabin they had available. At $129 for the night, it was my most expensive breakdown of the trip, but it was only 200 feet away and the only thing I had to climb was the stairs.

I ate dinner on the front porch of the outdoor center, taking advantage of the wifi since I had no cell signal, then retreated to my safe haven to prepare myself for the next day. This cabin was the only one without wifi, which was a blessing because without my phone to distract me, I showered, prepped my bike, and was in bed before sunset.

I'd expected to get stronger as I went along in the race; that was definitely not my experience, though I guess hanging in there day after day took a kind of strength. Still, it was interesting to note how well my body was coping: the neck and hip aches of the first days were gone; my legs may have felt like empty twigs, but they didn't hurt; my hands were less numb, and while sitting on the saddle ranged from "no problem" to "not today", I'd been far more uncomfortable in shorter races. My only real physical problems were a bruised and blistered right pointer finger (from all the shifting) and sore feet (from all that walking in bike shoes). Mentally, as you've surely noticed, was another story.

The route info on the ACA map notes "our mountains aren't very high, but our valleys go really low", and the same could be said for my emotional state. The positive feelings -- satisfaction, pride, appreciation -- were muted and, at times, almost external, recognizing that I should feel them rather than actually experiencing them. Unhappiness, though, I felt deeply, swinging quickly to tears for large and small reasons.

In the same way that climbs (especially when you're walking them) take exponentially longer than descents, the negative feelings seemed to fill much of my time. Since I've historically thrived in difficult situations (bring on the muddy Dirty Kanza hike-a-bike!), it was confusing and disappointing to have my "annoying positivity" fail me, but I think that was a function of being alone. With joint suffering, there's always an element of the ridiculous -- "can you believe this shit?" -- but adversity faced alone is just another slap in the face.

Luckily I had a big, comfortable bed, soft pillows to cry into, and a full night's sleep in which to get my head right for the coming day, because unhappy or not, I certainly wasn't quitting. 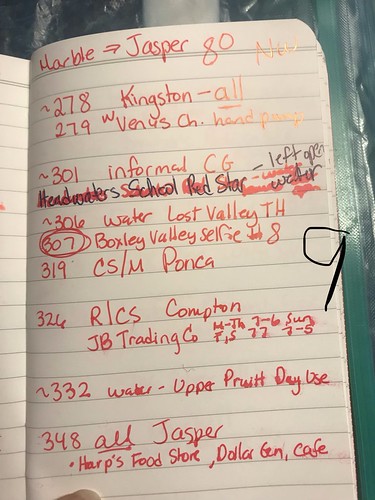