Commentary by Chuck (green) and Steve (yellow). My responses in blue.

The overnight temperature dropped into the high 40's, so I spent a somewhat shivery night in the summer-weight bag I'd settled on because it packs slightly smaller than my warmer one. That, combined with the sound of one of the guys' tent zippers, woke me just at dawn so I didn't miss the morning show.

Wabasis Lake presented a stunning sunrise to start the first full day of our trip and made the 9 mile off-route location worth every pedal stroke.

Ahead of the trip we'd agreed upon 8 a.m. as our goal departure time each morning. Having done one previous bikepacking trip with Steve, it's fair to say that I was nervous about how long it would take him to pack up. On this first morning, though, I was the slowest to be ready, my timeliness a casualty of my continuing failure to figure out where to put my extra food.

Kate's concern was legitimate. My ability to overthink and procrastinate, for reasons not immediately obvious to me, can't be explained. To my credit, I believe that I slowly improved my routine as we progressed, but I must be vigilant, and there's still room to do better. At least on this morning, I rose early enough to be ready to roll.

Normally I take enough snacks to keep me happy on the day's ride and just buy my meals (or "meals" as it often works in bikepacking) at restaurants and C-stores along the way. Knowing that the route led through some quite remote places on some very slow terrain, however, I'd opted to bring extra food along. I had two bulky Mountain House bags, several packets of oatmeal, a rice packet, a foil pack of Starkist Chicken, and a flat but heavy heat-in-bag hash brown dish. In retrospect, it was silly to lug all of this food through the first part of the ride, where resupply was, if not plentiful, certainly sufficient. Beginning to realize this, I resolved to start using up the meals and made the hash browns for my day 2 breakfast (they were delicious).

We retraced our previous day's ride, intersecting the M.O.R.E. route at the north end of Rockford, and enjoyed an easy morning of pedaling on the paved White Pine Trail, stopping for second breakfast about two hours in. 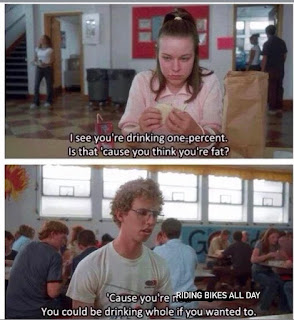 Napolean Dynamite made the SuperKate blog!

Chuck and Steve mentioned the movie during our trip. As with 92% of movie references, I didn't get it, so that had to be rectified when I got home.

Eat early, eat often is one of my favorite parts of bikepacking. Like many women, I guess, I have a complicated relationship with food, and the opportunity to use my body to the degree that I can choose my meals without regard to calorie count -- in fact, work to eat enough calories -- is a special kind of freedom.

Damn it, Napoleon Kate, make yourself a dang quesadilla! Seriously, though, eating becomes a continuous process with this length of bikepacking route, bringing with it some mixed emotions...joy and happiness!

At mile 27 we turned off of the bike path onto a gravel road. Each new surface felt like progress, and every turn a mystery. Having experienced the Coast to Coast gravel race, a solo bikepacking car camping trip last year, and various family vacations, I've learned that Michigan gravel has multiple personalities: you don't know whether to expect the rocky surface we're used to around home or anhy of multiple depths of sand. The first roads were your basic gravel, but near noon we reached some sandier surfaces.

The roads here were mostly rideable, though Chuck and Steve had easier time of it than me. Like technical terrain, sand seems to favor confidence and momentum, both of which I lack. I was trailing slightly behind when they stopped for a short break and then again almost immediately when we restarted. In my long history of riding with Chuck, this is a common occurrence; the only difference is that now I'm a little more capable of keeping up when the riding isn't tricky.

We jumped just off-route at the town of Croton to swing by the Croton Bay Trading Post for water and snacks. Because most places around home are still not allowing refills, I usually ended up buying bottled water to refill my hydration bladder. Like the varied road surfaces, Michigan's Covid restrictions were a mixed bag: signs requiring masks and people actually wearing them, signs requiring masks and no one wearing them, masks unless vaccinated, no signs about masks or distancing at all. We are all fully vaccinated and so just abided by whatever each store or restaurant asked.

We continued on a mix of pavement and gravel to Twinwood Lake Recreation Area, the end of the Lower Peninsula 2 section of the M.O.R.E. route. Even though we'd started midway in this section and hadn't ridden section 1, it still felt like a milestone.

The second and third sections of the route had many camping options, allowing us the freedom to start the day without planning. At Twinwood Lake, Chuck and I took some time to look over the upcoming section and make some plans about where we might stop.

Logistics had been a huge weakness for me during my first go at the ARHC route. There are so many interdependent pieces, especially if you're a bit of a princess and aren't open to curling up on the side of the road. I'd really struggled to make good decision, more than once riding myself into a food desert without properly stocking up in advance and paying the price tackling the next day vastly underfueled.

This trip I had the advantage of prior experience, much better race prep (as far as logistics...we won't get into my paltry mileage), and a great teammate. Chuck and I have been racing together for years, and both of us found parallels between adventure racing and multi-day bikepacking. Instead of checkpoints we were plotting food and camping stops, but the strategy, decision-making, and trust we've developed translated well. This was Steve's first big endurance venture, and I think he was happy to manage his own effort and leave the planning to us.

Trust me, at this point Steve (I) was totally consumed by managing his own effort. I was pretty much oblivious to the teamwork on display between Kate and Chuck. I'll be sure to include more about their skills in a future post.

We decided to continue on to White Cloud, another 8 miles away, make sure we had food and snacks to get through late morning the next day, and then ride until it made sense to stop. Just past White Cloud we would enter the North Country Trail. I had ridden a 7-mile stretch of this last year and knew that part, at least, was flowy and rideable. It seemed like we should still be able to make good time, but there were no guarantees once we passed that familiar stretch.

It was around 4:30 by the time we reached town. Having subsisted on mostly C-store fare and snacks for the day's ride, we stopped for pizza. Chuck and I also grabbed big cinnamon rolls for the next day's breakfast (you know, because I wasn't already carrying enough extra meals). The waitress was nice enough to wrap up the extra pizza; she gave me the cinnamon roll in a paper bag, which wasn't ideal but fit into a spare baggie to eliminate potential mess. From there we rode a couple of blocks to the Wesco for snacks and water, then set off down to road to finally hit the trail.

The spare baggie was a great idea.  I ended up with melted cinnamon roll icing all over the inside of my bike bag.

I couldn't believe my luck when we were seated at Maike's Pizzaria, Bakery, and Cafe in White Cloud. Finding gluten-free pizza crust and an espresso maker was like winning the small town lottery.

I'd been really excited both to ride the NCT again and for the guys to get to see it. I had loved the little bit I saw last year before losing my tent poles (never to be seen again), cowboy camping overnight, and then switching my planned bikepacking trip to car camping. Thankfully, the trail didn't disappoint, though both guys gave me a skeptical look at the very sandy entrance. "It's not all like this!" I promised, hoping fervently that this was the truth.

The time spent on the North Country Trail was some of my favorite of all the miles we covered.  The majority was smooth, flowy, well marked, and very well maintained.  The surrounding open pine forests and miles of ferns covering the floor kept us mostly in deep shade and smelled fantastic.

We rode another 18 miles of road and trail, thoroughly enjoying the singletrack but also keeping an eye on the time. We all wanted to reach camp before nightfall, so we took a little road detour to cut out a few miles of trail, in the process learning for the first of many times that trading singletrack for Michigan roads isn't always much of a timesaver.

We rejoined the trail shortly before the spot where I'd turned around after noticing my missing tent poles, and it was fun to see some new terrain. At the same time, I was wearing down a bit. At 79 miles, this was my longest ride of the year, loaded OR unloaded, and so I was happy to see the sign for Nichols Lake Campground.

More happiness was inspired by the sight of a bathhouse with electricity, flush toilets, and showers! This was a welcome surprise because in my experience few Forest Service campgrounds have these amenities. We set up and ate our leftover pizza. As we prepped for the next day Chuck fielded a wrong number phone call that became more bizarre with each passing moment. Thanks to his hearing loss the volume was high enough that I was able to hear the whole thing, and we laughed about Ginger -- "Did you kill her? She's a big ol' girl! You'd need to dig a big hole to bury her!" -- for the rest of the trip.

Camp tasks completed, eventually we all showered and climbed into bed. It had been a good day.