We woke after a good night's sleep, ate breakfast, and packed up. Our location near the road provided a front row seat to numerous bikes passing by. There was obviously an organized ride or some kind of event, and I was super curious about it, so after I was ready I waited by the side of the road in hopes that a straggler would pass by and stop to chat. No such luck, though, and we left without getting clued in on what was going on.

The first miles passed quickly on some nice gravel and then paved roads that brought us into the town of Kalkaska. We stopped at McDonald's for second breakfast and were momentarily thwarted by the closed dining room. No worries -- I downloaded the app and ordered for us all from there. Then, worried the workers wouldn't realize we were at the tables in front, I parked myself in one of the pick up spots until they brought our food.

We took a leisurely break to eat and look over the maps for this next segment. Despite the course description -- "Mix of seasonal roads, gravel, and NCT singletrack. Generally the terrain is quite sandy. First singletrack section is difficult to ride and not well-used. Several sections are not well used, overgrown and slow going..." -- we opted to return to the route.  Maybe it was the promise of good singletrack later in the section, but I think it was mostly that we still wanted to experience the route and not skip over everything that sounded hard.

Anyway, riding into downtown Kalkaska we still needed to fill up water, so we stopped at a large pavilion with fountains and some NCT volunteers. Steve chatted up Renee, one of the volunteers, and scored us some NCT stickers and her card in case we needed help or food drops later in the ride. She also mentioned a trail angel near Petoskey who might be of assistance. We never needed to use it, but we were happy to have the safety valve of that card.

There was a giant chair, so naturally we took pictures there.

Kalkaska makes a point of being a trail town, so even with the course notes' warning it was a little surprising just how unenjoyable the trail outside of town was. It was basically a narrow rut through a shadeless wasteland of scrubby vegetation. I think I spent almost as much time scootering as I did pedaling.

They should rename this section the "North Country Trench." In places it was nearly impossible to avoid pedal striking the edge because of the combination width and depth of said trench.

The only highlight was seeing a pair of sandhill cranes. I'm not really a bird person, so it would have been lost on me without the guys pointing them out.

The mated pair of sandhill cranes put on an amazing show of parenthood. As we were stopping to observe the birds, one ran to the left side of the trail while the other went right. I noticed the bird on the right quickly hid their colt (a baby sandhill crane) in a clump of grass. The bird then ran back across the trail to our left, where both adults put on a show, trying to distract us from their colt. They displayed as though they had a broken wing and vocalized in a way to keep our attention, attempting to draw us away from the baby. Pretty impressive tactics for a bird.

In a case of "out of the frying pan, into the fire", our relief at escaping the bleak singletrack was short-lived.

Pushing through the deep sand seemed to take forever, and the midday heat added another level of fun on top. Finally we emerged from that section onto pavement once more. As we reached Pickerel Lake State Forest Campground, Chuck called a time-out for another lake break. True to form, he waded right into the cold, clear water.

Early in our trip, we had a few unseasonably warm days for Michigan, and this one was the hottest, reaching 92. No wonder wading out into the lake felt so good.

Also true to form, I waded carefully in to the waist, too wimpy to soak my upper body despite the heat, multitasking by enjoying the last of my McDonald's leftovers while we soaked. 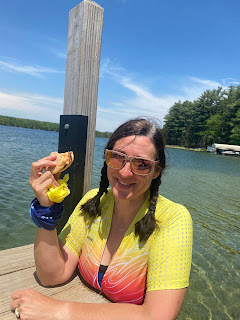 Between the beautiful, clear lake and a great campground, I was a little sad to leave Pickerel Lake, but of course it was way too early to stop for the day. After topping off our water, we headed out again, this time with the course notes promising good things: "Singletrack from Sunset Trail Rd. [where we were] to Eagle Lake is pleasant to ride with some big climbs and descents. The sections that follow are not as pleasant riding. Good camping on Sand Lake."

The trail immediately started climbing as we turned back onto it, and I soon was pushing my bike again. Despite the break and the snack, I'd hit a slump and felt pretty lousy unless riding downhill. The guys had to do a lot of waiting on me during this section, but it was a great section of trail.

This was a great little section of singletrack but dang...it was HOT!

Around 4:00 we arrived at Eagle Lake, signaled by the notes as the end of the pleasant riding, we decided to detour onto roads rather than taint our good singletrack experience by ending it on "not as pleasant" trails. We didn't get far before we realized that our detour was going to involve sandy bullshit. Having our fill of that earlier, we returned to the trail. It had to be better than the alternative.

While the trail wasn't as good as the previous section it was still rideable and scenic as we passed through pines and by lakes and ponds.

By this point I'd been in the midst of my afternoon slump for two hours and was on the verge of breaking into tears, so I was thrilled to reach the turn-off for Starvation Lake General Store.

Though small, the store had a good selection of snacks, drinks, and food. I picked up some treats and, on a whim, a canned Bloody Mary, then bought an ice cream cone to eat outside. When the guys came out to join me, Steve asked Chuck what he'd bought for dinner. It was silent for a moment, then Chuck answered, "....dog food."

I was deeply perplexed by Chuck's response. My mind was torn -- it was out of character for Chuck to be sarcastic. At the same time, his facial expression was so serious as he just continued to stare at the can. Too funny.

In his defense, the can does look like it could be for people, especially if you've been riding bikes all day in the heat and don't notice the purple dog near the bottom of the can.

We got a good laugh, then Chuck went back into the store to exchange his pet food for people food.

My heat-addled brain thought the picture on the can looked like it would make a great dinner!  I didn't notice the "Premium Dog Food" until I sat down outside.  The store owner kindly traded me for a can of Campbells Chunky Soup.  But later that night at camp I wondered if I should have kept the dog food.  The soup was awful!

While we all sat there enjoying not riding our bikes for a moment, a man pulled up with questions about our ride. We told him a bit about our trip, then he filled us in on his history in the area and the bar his parents used to own but didn't any more.

After the store, it was back on to the trail for the last miles before Sand Lake, where we'd decided to camp for the night. We first passed through an area of active logging, a bit torn up but still rideable.

The next trail we rode was slightly less enjoyable, I was very ready to be finished and keeping a good eye out for this lake camping the notes had mentioned. We arrived at a nice little beach area but didn't see any established sites; Chuck thought this spot would make a great dispersed camping site.
I had really been hoping for a campground with at least an outhouse and water spigot, and despite being perfectly happy with the spot we'd already found the guys humored me and rode first a little further in search of my imaginary campground and then retracing our path to go to the other side of the lake. Of course, getting to the other side of the lake involved riding another difficult-to-pedal sandy road. Luckily, before we'd gotten too far, we ran into a local guy who confirmed there was no campground, just a spot in the grass that people used.
That sounded less appealing than our beach, plus we'd have to ride right past the beach the next day. We turned around and once again returned to the spot Chuck had first suggested 45 minutes earlier. And it was perfect. One of my favorite campsites of the trip.
Once we set up, we filtered water and then had a little vestibule happy hour while waiting for our food to cook. One minor bummer of bikepacking is not having chairs to sit in at camp, but the front porches of our tents sufficed, and the beachfront location really couldn't be beat.

It had been another good, but hard, day. With all the heat and sand and singletrack (and lake and ice cream stops), we'd worked hard to put in 46 miles for the day. Even at that slow pace, my Strava rated it "massive relative effort".

A nice breeze blew off the lake, keeping the bugs away, until past 9; its cessation/their arrival was a great incentive to get into the tents. That, combined with my lack of cell service at camp (I'd had to climb a ways uphill to get enough signal to text Jeff), helped ensure the early bedtime that I desperately needed.

It was one of my favorite campsites as well.  One of the few where we were able to hear (and see) loons calling.

I'll say it again publicly: You were right!

Next: Day 6: Sand Lake to Mackinaw City (not live yet)