The zoo in winter

Jacob went to a birthday party at the zoo on Saturday morning. Normally, being a warm-weather person, I don't get to the zoo unless it's a nice day. Additionally, we were supposed to be there by 9:50...which means I had to get up earlier than I usually do on a Saturday. Of course, I had forgotten to buy the present before Saturday, so Jacob and I hit Target on our way out of town...and THEN had to fill up the gas tank. I was batting a thousand by 8:45 in the morning. Geez.

It could only get better, though, right? One would think so, but then one would be wrong. Jacob had forgotten his blanket. This blanket goes everywhere with him. We have dragged it all over Six Flags and the western United States. Since he's going to be going to kindergarten next year, I'm already dreading the initial transition to not being able to take his blanket with him. (He is, too.) He's done better lately with forgetting his blanket for short trips, but he sure didn't on Saturday! He cried and yelled about the blanket for the entire drive. 45 minutes of screaming 5-year old. Pure joy. By the time we made it to the zoo, I was ready for a beer...and I don't even like beer!!

After everyone showed up, they had us walk across the zoo and go behind one of the fences (aren't we special? :D) to the Educational Outpost. It's a building that they use for birthday parties and scout groups. One of the first things we saw there was Phil the Gorilla. 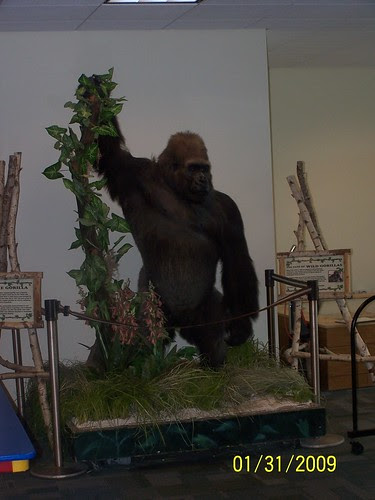 I can remember seeing Phil in one of the buildings when we visited the zoo as kids, but I haven't seen him in ages. No beer can in his hand, though. Does anybody else remember seeing him with a beer can?

The ranger in charge of the party talked to the kids about the kinds of things the rangers have to do to take care of the animals, in particular cleaning the cages. The kids were put into teams for an overly involved relay race. I think I would have been confused! Here are the kids while the ranger explains the details... 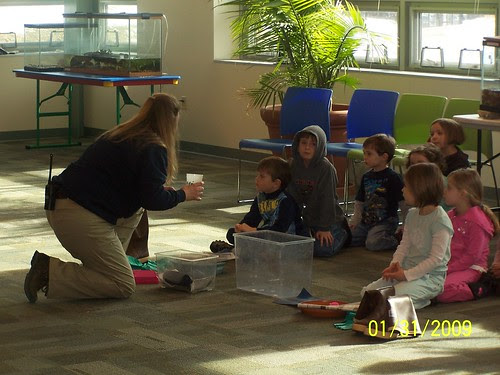 The next picture shows Jacob putting on the rubber gloves to clean the cage. (I'm seeing great possibilities at home...maybe a house-cleaning birthday party is on the horizon. Think of the relays! "Sort the dirty laundry!! Scrub the toilet!! Clean the windows!!"...I'm guessing no one would show up, though. :( lol). 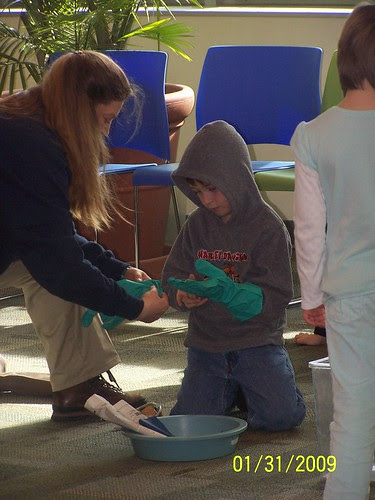 After the relay the kids got to make blow guns to shoot tranquilizer "darts" at the big animals (aka adults in the room). They were supposed to color the paper for the tube. Jacob colored a dot that was a little smaller than a dime. He is not one for coloring! He did enjoy the shooting, though.

Next on the agenda was the chance to learn about and pet a few animals. The kids got to see a hedgehog, a dove of some type (the bird world's foster parent, it'll sit on any eggs of the right size, leaving endangered species free to get right back to business), and a lop-eared rabbit (gigantic, but very cute). 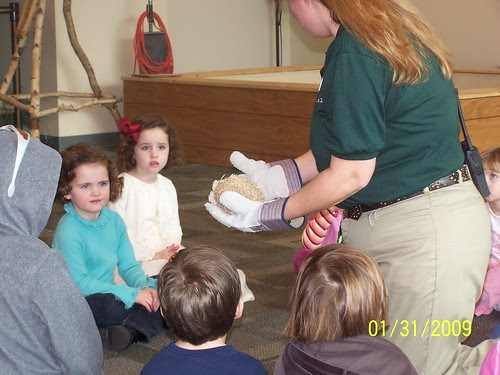 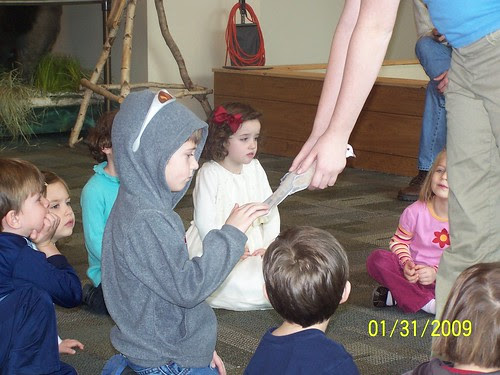 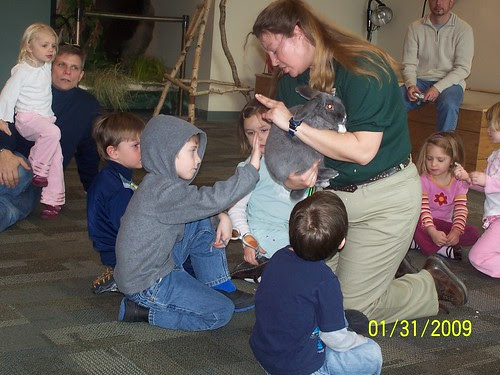 Instead of birthday cake, the kids got to eat tiger cupcakes. They were very cute. 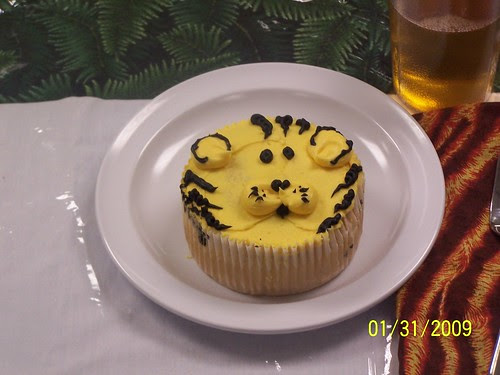 Once the presents were opened and the gift bags passed out, Jacob and I decided that, since we were already there, we might as well check out some of the animals. You hate to waste a nice, sunny day...plus, Jeff was off buying a TV, and I knew he'd feel bad if I started cleaning for the Super Bowl party without him! (Yeah, right) We saw tigers, some bears, the penguins of course (and, though their house smelled stinky as ever, it felt almost warm in comparison to the outside!), a jaguar, zebras, a camel (nasty), and the sea lions. 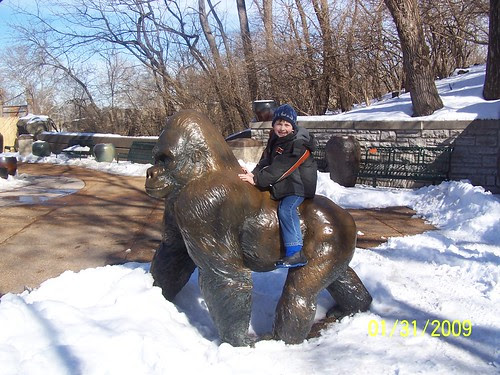 Jacob liked the animals, but his favorite part was playing in the snow! In one of the pictures, you have a great view of his missing tooth. He was grabbing snow and throwing it at the side of one of the buildings. In at least one of the pictures it looks like he was crying, but he was cracking up. And don't worry...no buildings were harmed in the taking of these pictures. :-) 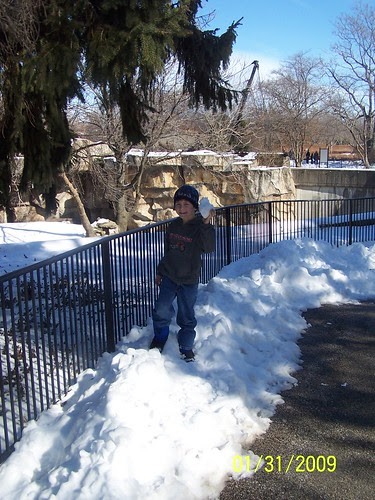 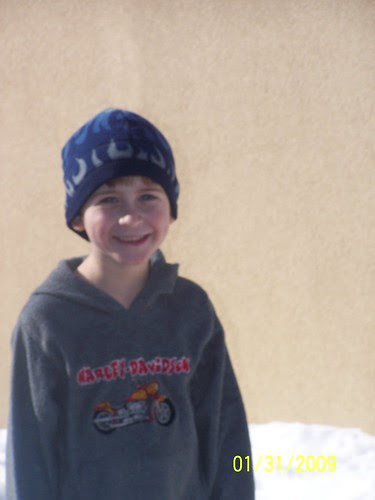 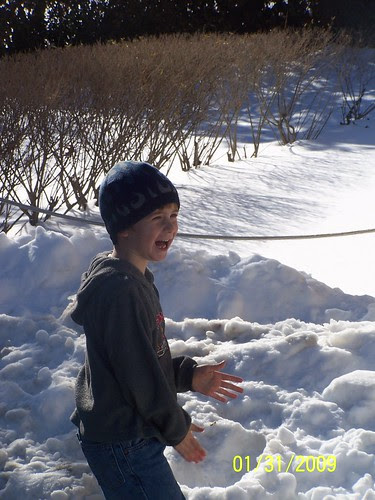