A - is for my awesome race Saturday.  If you haven't read it yet, you should go back and check out the race report. It's way more interesting than this drivel. (If you have read it already--bless you!!--disregard that.  The following is absolutely fascinating.  Really.  To someone living a dull life.)

I - There's no "i" in team, but there are plenty of them in irony, idiot, injury, and ice. Irony---completing a somewhat challenging trail race without so much as a stumble (OK, one little trip, but I never fell) only to hurt yourself the next day.  Since I was gone pretty much all of Saturday between my race and N's volleyball tournament, I wanted to spend some time with J on Sunday.  So I took him and his friend to the Y.  Where I managed to hurt myself.  Playing basketball in dress shoes.  Brilliant.

P - is for Public Service Announcement.
After the boys got tired of skating, we went to the gym to "play" basketball.  J's friend plays, J has barely touched a ball, and I was wearing flats and was just going to watch.  Yeah...that lasted about 1 minute before I was chasing them around the floor.  Somehow I hurt my foot...don't know if I bruised it or pulled something or what.  Booo.

R - is for ran anyway.  I was scheduled for 2 miles today, and I've been bad about missing runs here and there during the week.  Probably should've skipped this one.  I was under my goal time (for the easy run) on the hilly route, but my foot hurt.  The rest of me wasn't too happy either.

E - is for energy 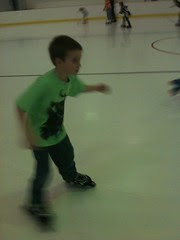 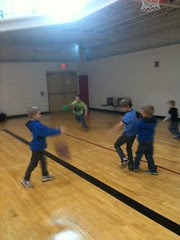 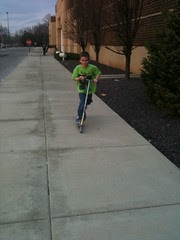 After being home from school for over a week, my child has been bouncing off the walls.  So, on Sunday, we roller skated, played basketball, and walked to the grocery store.  While Jeff and I took turns running errands at the store, J did laps on his scooter or running.  He made the round trip to the stop sign and back 19 times in addition to our mile round trip.  All of that activity was a good start, but I'm so glad he went back to school today and could run off more of that energy at the after school program.

M - is for marathon.  It's time for me to start making a decision.  I had planned to go to Wisconsin at the beginning of May to run my first marathon with my brother.  Unfortunately, he sprained his ankle pretty badly running in Miami and is supposed to stay off of it for the next couple of months.  That makes him questionable at best for the marathon, and I really don't want to drive 7 hours to run it by myself (and yes, I'd have been running it myself anyway because he's way faster than me, but we'd still have been doing the race together).  So my alternatives now are the Go! St. Louis marathon or maybe the Kentucky Derby marathon.

The plusses of the Go! marathon are that it's local, it's exactly one year from my first 5K ever, and I think it's one that my tri club goes to.  On the other hand, I've done several races in St. Louis.  The Kentucky Derby race would be somewhere new, and we love Louisville.  Plus, you get to run a lap inside of Churchill Downs....how cool would that be? I'm trying to convince Jeff that it would be a fun road trip for the two of us.  Of course, the travel expense is also the downside there.  Hmmm...stay tuned.

T is for tornado(es).  Last night saw us heading to our basement at about 11:15 when the tornado sirens went off.  We had some seriously scary sounding wind.  By midnight, the storms were past us and we headed back up to bed, J having slept through being picked up, carried downstairs, laid on the floor, and brought back up to bed.  Some nearby stores sustained some significant damage, some people a street away from us had their patio furniture come through their glass doors, and much of our town was without power.  Many surrounding towns had extensive damage.  Thankfully, the worst damage we've seen is a large limb from our neighbor's tree in our garden, and our power stayed on all night.
Labels: bad decisions dress shoes aren't made for basketball courts injury marathon decisions tornadoes