I was a little stung recently* when I was called out for being a wimp.  I know, I know, I can hear you now...why would it hurt your feelings to be called a wimp when you're always talking about how wimpy you are?  True, true.  This stung, though, because I don't like to be thought of as soft in an area where I'm not.

In case you missed it, a while ago I posted about our camping trip and how thankful I was to have had our camper (and its a/c) while we were camping in 100+ degree weather.

It's a pretty basic pop-up camper.  It's nothing fancy: it has a working a/c but a broken sink.  Still, we love it.  Jill, however, was not impressed with our camping...or "camping": 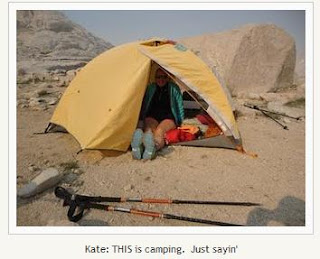 ﻿﻿ And then ajh (my cycling kindred spirit) got in on the act:


Lest you all think less of me for my luxurious campground accommodations, I want to assure you that I'm not so soft as they would have you think.  I have camping cred.  From my first date with Jeff in 1998, we tent camped.  And we did it a lot.  Most summer weekends during our first few years together we could be found at one of the state park campgrounds in the St. Louis area.
Camping with the two of us was pretty easy, but on the weekends that I had the older boys (who were my only boys at the time), they went, too.  They were 4 and 5. 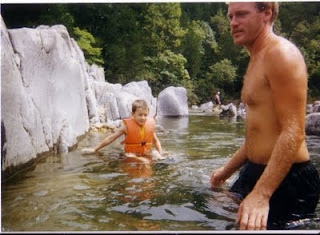 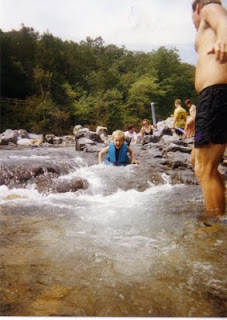 I didn't realize at the time how little they were.  Now, I look at these pictures and think, They were just babies! By Sunday afternoon I'd be exhausted from having to chase them all over, walk them to the bathroom to make sure they wouldn't be exposed to some campground pervert, and don't forget trying to sleep on an air mattresses with two little boys who are rolling all over the place.
The best, of course, was when it rained...and I swear, I think it rained every time we camped one summer.  We had one good tent, and it seemed like any tent after that one leaked.  You haven't lived til you've tried to keep two energetic little boys entertained while you're stuck inside a dripping 5 foot square box; I mean, there are plennnnnty of ways to kill the time if it's just the two of you, but you're a bit more limited in your options when the kids are along.
We tent camped all over our area and took some longer trips, too.  The very coolest (both figuratively and literally) was when Jeff and I drove to the Smoky Mountains in March of 2000.  Since it was March and still cold, we planned to stay in a hotel but threw the tent into the car "just in case".  The first day we drove to Red River Gorge in Kentucky and hiked around the GORGEOUS (ugh, no pun intended) area. 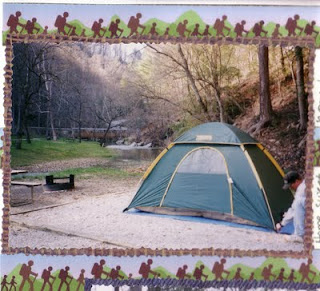 We were very comfortable while hiking in our long pants and sweatshirts, so we decided to go ahead and camp.  After all, we loved camping, and it was much cheaper than staying in a hotel.  For some reason, there were very few other campers...in fact, I think there was only one other couple stupid thrifty enough to camp.  And once the sun went down, we realized why: it's freaking cold in the mountains at night!  Armed with some pretty basic sleeping bags rated at about 40 degrees, we used a combination of body heat and hats, gloves, and coats to keep from freezing.  And we didn't learn our lesson, because we tent camped the next two nights in Smoky Mountain National Park as well, wearing the same "pajamas".
When my sister-in-law and her husband got a pop-up, we scorned it.  We were tent campers.  We even tent camped with this guy.  Once.
Trying to make room for baby paraphernalia in a tent was a nightmare.  Trying to sleep with a baby while you're on an air mattress and terrified he's going to smother if he turns the wrong way so you hold him the whole time is a waking nightmare. I know other people do it, but I don't really know how.  After 6 years of tent camping, I told Jeff we weren't taking J again until we had a camper.  You see how that worked out.

You know the best thing about the camper?  We stay dry when it rains.  You know the second best thing? When we have to stay inside because of the rain we can spread out a little bit, which is a huge help in keeping the bickering to a minimum.  I won't lie...having air conditioning is pretty sweet, too, and having made the investment in our camper is a good incentive to get out and camp, too.  The first year we had it (the year J was 1), we spent 30 days camping.

When I signed up for the Katy Trail ride for the first time, I was a little worried: was I too soft?  How would I do sleeping in a tent every night after riding my bike all day long?

Just fine, it turned out.
﻿
Sleeping in a tent was still no problem for me.  Well, sort of.  Going to bed was no problem; actually sleeping didn't go so well.  It wasn't the tent; it was the heat.  The temperature stayed above 90 even at night, and while it's a little hard to see in the picture above, my tent only had screening in the very front and very back.  Unless the breeze caught me just right, the air inside was dead.  It was miserable.

After two nights of lousy sleep, I hit on a solution.  Rather than swelter in the tent, I just put my sleeping pad on top of a tarp, covered it with a sheet, sprayed myself well with bug spray, and slept under the stars. What a relief to actually be able to sleep!

I had the same accommodations in 2010, so clearly I'm still capable of being a tent camper.
﻿
﻿
But Kate, I hear you say despite alllll this, that is so LAST YEAR.  We are not impressed.  Well, I knew you'd say that and tried to figure out how I could show you all (or at least the doubting Thomases) that I am hardcore.  The answer, of course, was right in front of my face.  Yes, the only way to prove to Jill that I, too, am a tough camper lady would be to hike Mt. Whitney like she did.

Jill was nice enough to volunteer to hike along with me.  Actually, I think that she just wanted to see the carnage when I tried sleeping on the cold, hard ground.  Well, that, and I offered to bring some extra food.  And wine.

I won't lie, that cooler got heavy, but the amazing views (and good company) certainly helped the time pass by.  Even so, I was glad to take any break I could.

When we got to the water crossing, it looked so inviting that I had to jump in.  Luckily, I just happened to have an old swimsuit.  Unluckily, Jill was all, C'mon, I've already missed out on summitting once this summer, so I couldn't relax for too long.

You know, even though this hiking/camping trip was the first time we'd met, I just felt like I've known Jill forever.  We had a great time hiking together and figuring out the self-timer on the camera.


After about 5 hours of hiking, we finally made it to trail camp.


I had more wardrobe changes in that pack than Britney Spears.

We snapped another shot together at camp.  :) 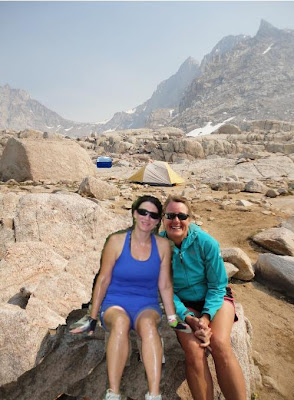 I don't know if it was all the hiking or all the wine or what, but I slept like a baby... 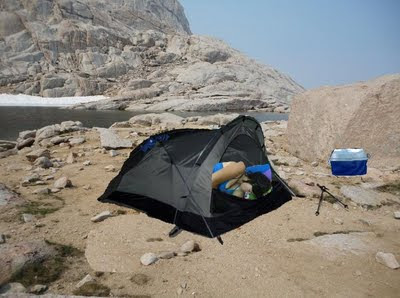 I had just laid down to take a short little nap and I was OUT.  I slept so long that we didn't have time to make the summit attempt.  Jill said she was a little disappointed.  I thought I saw her dancing around, but she told me she was just stretching her sore foot.  We spent the night talking and finishing off the wine we'd brought.  We headed down the next morning. 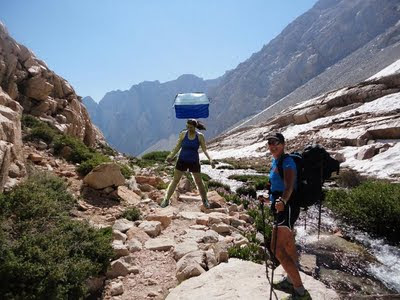 Though we didn't reach the summit, I woke up with a nasty hangover, and I think my head is now permanently flattened from carrying the cooler, I at least was able to clear up this whole wimpy camper thing and prove to you all that I am a REAL CAMPER.

And I got to do it with Jill. 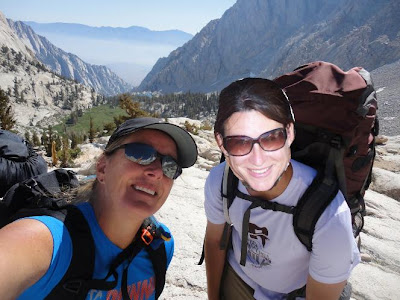 Labels: fake blogger meet-ups I can tent camp I just prefer a/c if you pick on me I'll photoshop you too