Went to a college basketball game Friday.  Turned out Feb. 4 was actually Saturday.  Who knew? Fail.  Went home and watched Invincible instead.  I love football movies, and I love Mark Wahlberg, so I really love this movie. 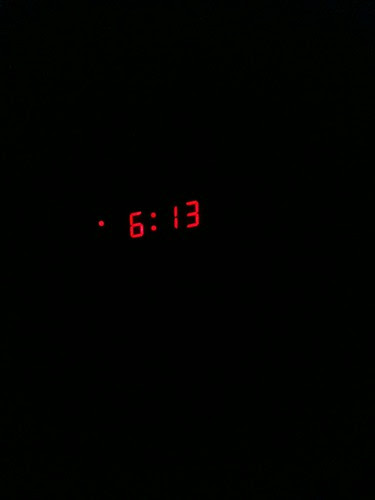 Saturday morning came way too early.  N. had to be in St. Louis by 7:30 for a volleyball tournament that his team was in.  He can't play yet since he's been recovering from surgery for a month now, but he has to be there.

Usually if there's a conflict between a tournament and one of J's things, I go to the tournament and Jeff goes to J's event.  This week, since N wasn't playing, I decided I'd drop him off and then go back home so I could watch J play in his first basketball game.  Then, I'd head back towards St. Louis, do my scheduled 10 mile run, and hang out at tournament and cheers N's team on.

So I dragged him out of bed and out the door...

Made our mandatory Quik Trip stop...

Headed down the soggy interstate to St. Louis as I hoped desperately the rain would stop before my run...

It was kind of foggy out...

Dropped him off at his tournament.  He's finally able to practice again, so hopefully he'll actually be playing in the next one (2 weeks from this past weekend...in Chicago).


This was the first Saturday morning I've been home in...I don't really remember when.  Since Christmas, maybe?  J had his first basketball game at 9:30, so we made a quick stop at Home Depot for their kids' workshop.

Started on the little box that was this month's project...

And then drove down the block to the Y for the game.  Oh my gosh...I'd forgotten how hilarious second grade basketball is.  Our Y has a great developmental program where coaches stay on the floor and refs help coach the kids as well.

J made two baskets and got maybe one rebound.  The whole experience made me want to spend more time on a basketball court with him so he's a little more comfortable with what's going on.  Plus, he's too tall to only get one rebound.

There are quite a few trails within a 20-min range from the volleyball gym, but I opted for Castlewood because it's fairly familiar to me now and because a lot of it's trails are fairly rocky.  With the wet conditions I was hoping to avoid too much mud.

Probably because Sherry Arnold has been so much in my mind lately, combined with the facts that I've been running my trail runs with friends and have never run Castlewood alone, I was a little nervous about going by myself.  I'm writing this, so obviously it went OK.

I started out on some of the flatter trails along the river. Unfortunately, the flatter trails eventually lead you to the infamous Castlewood steps. Seeing as I've mentioned them repeatedly but have never gotten a picture that really shows what they're like, I decided to videotape my trip up the stairs (subtitled: four minutes of your life that you'll never get back). On the plus side, now you can hear what my voice sounds like when I'm gasping for breath.

The first 7.5 miles weren't bad at all. Slow as dirt, but I felt pretty good. I guess I've reached that point in my training where the extra miles you add to your long run hurt, though, bc the last 2.5 miles were no fun at all. Especially when I got to this section:


Unfortunately, I still had .2 miles left when I got to the parking lot, so I spent it running a couple of hill repeats on the nasty hill leading up to the bluffs. I ran as far up as I could without walking, then I jogged back down. It took two to finish off my miles. Then it was time to go pick up N.

Went to the basketball game on the real February 4th.  It was just a little bit busier than the night before when there was no game.

I went to bed about the same time my 8 year old did since I had to be up early for the worst idea ever.

Let me just say that 62 miles on a trainer was infinitely worse than I expected.  Thankfully, I had some great movies to entertain me.

This was one of the coolest virtual events I've gotten to participate in because of the communication aspect.  Since most of us were on trainers (at least one hardy soul was on rollers, which I understand is a whole different story), we were able to share our woes via twitter (we used the hashtag #supercentury so much that it was trending in the St. Louis area) and facebook.

It was much more fun that riding alone in my basement...even though it showed me how everyone was passing me up.

Though I bought (or started to buy) my trainer in December, this was actually the first time I'd ever used one. Turns out there is a slight learning curve, and by that I mean that I almost fell over two different times. I'm not exactly sure how, but I do know that if I hadn't been set up next to a wall and have landed on the floor. Still, I managed to eat my oatmeal breakfast while riding.

Despite the distraction of the movies, twitter, and Facebook, I got uncomfortable pretty quickly. I think I took a stand-up/stretch break at 20 mi, and then I stopped to get some food about halfway through.  Nothing sounded good until I looked in the freezer.


I think that bowl of ice cream got me through the next 15 miles.  It was sooooo good.  I also had a Clif bar, two cans of diet Pepsi, two bottles of water, and a bottle of hard cider (hey, I'm sure it was 5 o'clock somewhere).  Quality nutrition.

Here's how much I loved the experience:


The last 15 or so miles was TOUGH. I was completely soaked in sweat. J came downstairs and said, "It smells BAD in here." I had to assume I was the smell. I just wanted to be done. By the last 3, I was nearly in tears, but no way was I going to quit that close to the end. Finally, miraculously, it was over. Well, it was sort of over. You see, my 50k plan still called for a 6 mi trail run. 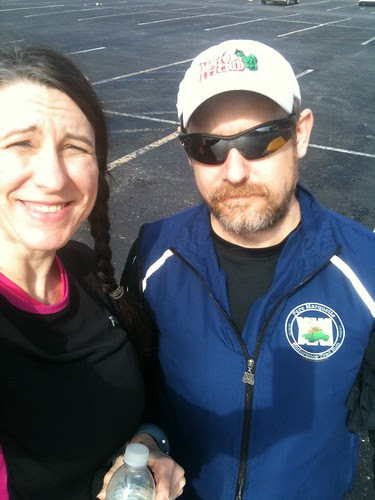 My partner in crime. Or stupidity. You say poTAYto...

Even though Patrick had also done the StupidSuper Century, he was still willing to go run 6 miles in the woods with me. Granted, I think he expected ms to wimp out and go for a road run instead of trails, but still. Everybody needs one of those friends who's up for hairbrained schemes, and he's definitely one of mine. The first three miles kind of sucked, but by the second half I was almost enjoying myself. 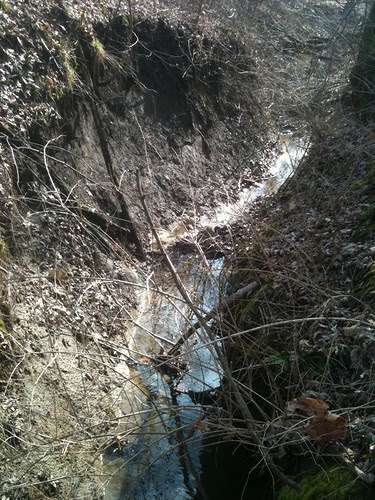 Here's a picture of the gully or whatever our icy bridge was over. I made sure to take it since Kovas seemed a little skeptical of the need for a bridge.

Due, I guess, to our strangely warm weather, our woods and in particular the ravines are getting some really cool mossy areas. It was really pretty. We explored a trail we'd never run before, and when it led down to a creek, we opted to kind of swing over the water (could've waded through, but why?) by hanging onto a downed tree. That slowed our pace even more, but since we were running 15 min miles, it wasn't much of an issue. Ok, it wouldn't have been anyway.

Whatever, it was fun, and maybe there's something to this recovery run thing, because I feel pretty darn good today, even if I did fall asleep before halftime and miss the majority of the Super Bowl commercials.

P.S. Check out the Team Virtus website for a poetic recounting of our stationary adventure. Thanks, boys, for a really terrible, fun time. And thanks to my friends who popped by on Facebook or twitter to cheer me on. I love that I have friends who'll encourage me even in the most colossally stupid challenges. ESPECIALLY in those. :)
Labels: 50K training bike trainer Castlewood State Park colossally dumb ideas Super Century Team Virtus weekend you too can create twitter trends if you just won't shut up