The view from the sidelines

When other people were registering for today's Go! St. Louis marathon and half marathon, I had bigger fish to fry. My first 50K trail race was supposed to be next weekend, so I never considered running at Go. You all know how that turned out, though, so I arrived at this weekend with nothing on my schedule. Instead of sitting home like last year, I decided to go cheer for the people I knew who were racing: one blog fan, one teammate, two high school friends, and two other friends.

I had no real desire to run the race until yesterday afternoon, when I saw a Facebook post from the race organizers that said registration for the half was still open. Hey...I could sign up! ...whoa...where did that idea come from?? Since we were taking the kids to the drive-in, though, there was no time to get over to St. Louis and register, and I put the idea out of my head.

My spectating research consisted of coming home from the drive-in at 1 a.m. on race morning and taking a picture of the course map with my phone. Luckily, I'd scored a ride with a friend who was racing and got bonus company with his friend's mom who was driving. I'd sent good luck messages to everyone this morning, and when JB replied wishing me luck and reminding me to stay hydrated, I reminded him that I was only spectating and should be able to tough it out. :) I got his response while I was sitting in a parking lot waiting to meet up with Scott:


I just realized that. Bummer. Had I known I'd have offered you an extra half number. We have one. You may still be able to use it if interested.

Now, I haven't had a double-digit run since February. I ate crap snack food for supper. I had a total of 3 hours of sleep. The temperature was 70 at 6 a.m. I had left the house with no intention of racing. I was totally unprepared to race.

Except...in an odd twist of fate, I was completely ready to race. I was, in fact, dressed in exactly what I would have worn if I'd planned to run (well, except I'd have worn a better sports bra). I was even wearing my Garmin because I'd wanted to see how far I walked while trying to be a good cheerleader. Do I even need to tell you my answer? I was all for it. Unfortunately, it turned out the bib had already been given away, but it definitely gave a shot of excitement to my morning.

We dropped the boys as close to the race start as we could and then doubled back to park in a nearby garage. I was really impressed with how little traffic there was; we were early, but not that early. Then, I mentally reviewed my list of runners and their shirt colors while Teresa looked over the course map. We planned to try and catch our people around miles 1, 5, 8, and then 11. Ish. It was kind of a fluid plan. 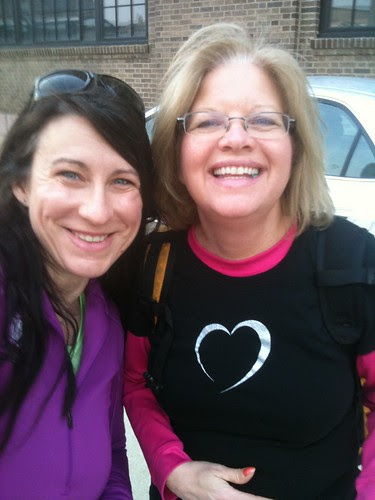 Pre-race and ready to get our cheer on

How cute is she? Totally doesn't look like she has a son who's...ummm...not that much younger than I am. The race started right on time, and we started cheering for all the runners as they passed us. Remembering how cool it was when someone called out my name at my first half, I did my best to read the bibs and cheer by names as runners went by.

I didn't do as well picking out the people I was actually there for. JB saw me and called out my name, I managed to spot Luke all on my own, Teresa picked out Scott and Darin, and I didn't see any of the girls at that first stop. That early into the race, though, runners were packed together, so we abandoned our first cheer station and moved on to mile 5ish.

We got to see the leaders fly though mile 5, which was very cool. Though the pack had thinned by that point, my friend-finding was spotty at best. JB found me, so I got my camera up in time to snap a picture of my thumb. I saw my Daily Mile friend Christopher, who I didn't even know was going to be running, and we saw Luke and managed to get his picture that time. Again distracted by all those names on the bibs and my need to yell out as many of them as I could, though, I totally missed Scott and Darin until they hollered "Hey mom!" (to Teresa), both Ruth and Amy had to call to me, and I never saw Michelle.


We had hoped to catch our runners again at mile 8, but they were pretty spread out and our route to our next planned stop wasn't enough shorter than theirs to give us any confidence that we'd be able to catch them in time. Instead, we ended up walking from the finish to somewhere around mile 12. Because JB was running the marathon, though, that meant we wouldn't be able to cheer for him any more, but we did get a nice preview of the long gradual uphill to the finish. 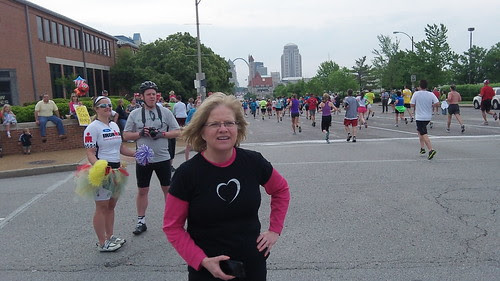 Waiting for the boys to get to us

All of the other guys had been running near a 2-hour pace, so we watched the pace groups to see when to expect them. I started looking nervously at my watch as the time crept closer and closer to 9:00. I wasn't sure when they had all crossed the start line, but I knew they were cutting it close. Then we saw Luke come through, still looking like he felt pretty good.


Next, Scott and Darrin came through. There were no thumbs-ups from these two. In fact, as we cheered and yelled, they went past without even noticing us. By this point it was pretty warm (even standing there I was down to my sleeveless top) and the heat and hills had taken their toll. They were ready to be finished.


We were located on a downhill stretch of the race. More than once, I heard a runners say, "It's downhill to the finish..." and I'd wince internally. I let them figure it out for themselves.

"Way to go runners! You got this! Stay strong!" Every time I could make out a name I'd cheer for that person. I got a lot of smiles, and a lot of Do I know you? looks. I was a little worried I was going to cause someone to trip as they looked back to see who was calling out their name.

After the guys passed us, we watched for the girls I knew.


We saw Ruth as she passed us and Amy as we were walking. I can remember when I did my very first 5K, two years ago on Go! weekend. I posted every little C25K training run I did on Facebook and made such a big deal out of my race. Meanwhile, Amy went and quietly trained for and ran the half marathon. I was so impressed!

The finish area was packed. I think something like 13,000 runners raced either today or were supposed to this weekend (though yesterday's shorter races were cancelled due to severe weather), and it seemed like they were all contained within about a 1-block radius. Teresa and I found Scott and Darrin (well, Darrin sent her a text to say where they were), then I went and said hi to Luke and his family. His wife and all four of their kids came down to watch and cheer, which is pretty awesome. There's nothing like having your family there to support you.

It was a great experiece going out and cheering for all the runners. I think it's the first time I've been on that side of the race, and it was a lot of fun. Still, it sure isn't the same as being out there running. I came away a little hoarse, and a lot inspired to be a little more committed with my running. Yes, I could've run today, though it wouldn't have been pretty, but if I want to be able to keep doing whatever at the drop of a hat I need to make sure that I've got the fitness to do it.
begged
Labels: Go St Louis half marathon marathon road race spectating