Thanks to my tweaked knee, the past week or so has been quiet on the exercise front.  I did get in one fun day hiking/climbing (gingerly) at Elephant Rocks State Park with my family (minus Daniel)...

And relaxing in the hammock...

OK, so I guess I've fit a lot into my summer so far, but what I haven't done is much general training with friends.  Since I've been toying with a mountin bike race in a week or so (more on that in my next post), I wanted to re-ride the course (scene of the crash that taught me the perils of ruts) to help with my decision.  I met up with Chuck and Lori Sunday morning and hit the trails. 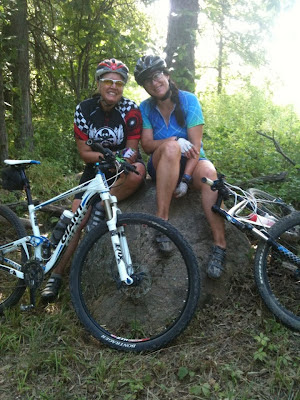 After encouraging Lori to do the race, too, we got onto the trails and I immediately started questioning my ability to do it.  I don't mind the riding, but the passing part (being passed, I think I've passed one person in my short history of mountain bike racing...and I think she was sick.  And barely in her teens.  But whatever) stresses me out.  Regardless, it was a good ride, except for the fact that my knee didn't really enjoy it so much.  Instead of riding a few laps with Chuck, I cut it short after one lap and went for ice cream with Lori. :)

I spent the next few days resting my knee, which feels fine when I'm walking and such, so by Wednesday I decided to see how running felt.  My knee didn't mind it, but my lungs pretty much hated me.  It's been close to a month since my last run (May 22 to be exact), and I could feel it.  That was the worst 3 miles I've run since I started the Couch to 5K plan back in 2010.  In fact, if I didn't know I can run, I'd have given up in the first block.  It felt that bad.  By mile 3 I no longer wanted to die, so I have hopes that the next run won't be quite as terrible.

Since my knee was ok running, I decided it was time to try biking again.  I messaged Patrick and Mike to see if they wanted to meet at our local trails.   Mike had to do his hair or something, but Patrick (whose commentary is highlighted in yellow) was up for a ride.  We agreed to meet at 4:45.
4:45 is a tough time for me to make. It requires me to rush home and take care of the dogs, grab all my stuff, and get out the door in mad whirlwind of activity, but since I had to pack for an overnight trip later I wanted to ride as early as possible. I knew Kate had the day off so when she messaged back that 4:45 was a good time I just hoped she wasn’t going to be waiting for me to get there.


Now I feel like even more of an asshole.

I showed up a couple minutes late (as usual) and got my bike out of the car (where it's been since I left Chuck and Lori on Sunday) only to see that my rear tire was completely flat.

I was talking with Jim C. so I didn’t immediately notice the flat. What I did notice was that it was taking Kate a really long time to get ready to go. When I noticed the flat I saw that she had an extra tube and it wouldn’t take that long to change. Soon it would be time to hit the trail!


That's ok, though, because I can change a (bike) tire.  Unfortunately, my bike bag only had a road bike tube.  Fortunately, I had patches and easily found the hole in the tube.  I not-so-speedily changed the tire, got the wheel back on, and was putting on my helmet when the tube began hissing audibly.

Crap indeed!  That road tube sure came in handy.

Got the wheel back off, just about rip off my thumbnail bending it against something or other, check the patch, smooth it down again, look at the tire and realize the sidewall has a pretty good gash, find a wrapper in the car to boot it, put everything back together again, and have just finished airing up the tire when it starts hissing again.

Crap wasn’t what I was thinking at this point, however watching Kate struggle with fixing her bike was well worth the drive to the trailhead. I could tell she was really stressing out over because she apologized literally a million times.


Anyone who's spent much time hanging out with me will tell you that apologizing is what I do.

Meanwhile, Patrick, who has plenty of other things he could be doing, is waiting for me to get my stuff together so we can ride already.  For a third time, I take off the wheel, check the tube for any other holes, and then remove the patch and try a new one.  Make sure the boot is in place.  Cautiously air up the tire again and replace it.  It seems like it's going to hold.

I have never seen a hole in a tube that big.


When Kate finished airing up her tire and turned to put the pump back in the trunk I made an air hissing sound. She whipped around with a mixture of defeat and anger on her face it was priceless. I couldn’t stop laughing.

I thought I might cry.  It was pretty funny, though.

I didn’t think the patch would hold.

At this point, neither did I.

Finally, about 40 minutes after we were supposed to ride, we start down the trail.  Not 1/4 mile in, my tire goes flat.  Clearly, I'm not supposed to ride tonight.  Patrick and I had a lovely walk back to the parking lot.  Thanks to him for hanging out with me and basically letting me waste his afternoon.

My afternoon was wasted at work, this was more like early evening.


On the plus side, at least I know before the race that a) I need a new tire (after buying 3 new tires for Dirty Kanza...yea...) and b) I have the wrong kind of tube in my bike bag.  I have no idea if my knee is going to be ok for the race or not, so I did what any intelligent person would do and registered anyway.

And that is the story of how Kate taught me how to not fix a flat. I thought her lesson plan was a little repetitive, but it is a lesson that will stick with me for a long, long time. If you ever ride with her I’m sure she would be happy to show you too!


Honestly, I'd prefer not to, but I'll be glad to watch you change your tire and torment you with hissing noises.

Speaking of the poorly advised race, it's going to be connected with a giveaway.  More on that in the next post! :)
Labels: flat tires living on Kate time yes I'm still a runner