I'm so behind, so I'm just going to play catch-up with some pictures.

We had our annual Halloween party. I hate it most years because it typically involves me doing a lot of sewing to make our costumes.  It wouldn't be so bad if I didn't start the week before the party, but if you know me at all you know that never happens.  This year I quickly agreed to the first costume idea that didn't require much sewing.  This left me free to go to the orienteering rogaine one weekend and the Katy Trail the next weekend.  Priorities, you know.

Because I wasn't sewing up to the start of the party, I was able to make some fun Halloween treats. 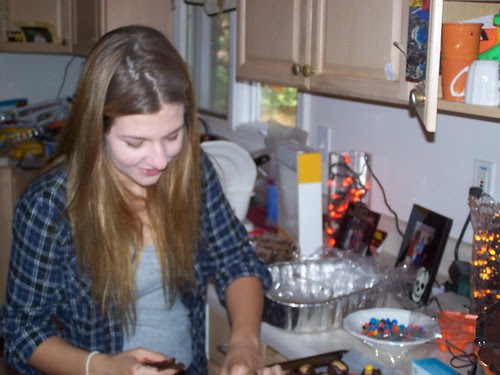 Daniel's girlfriend volunteered to come help me bake, so she dipped all the peanut butter eyeballs in chocolate...

I started on the bones, and then she took over...

No Halloween party is complete without...

Jeff and the boys worked outside to get things set up.

Instead of sewing our last-minute time was filled with makeup.

J got some goodie bags together for all the kids...

Like usual, we weren't quite ready when everyone got there.  Also like usual, the costumes were awesome!

As much as I hate it in the weeks leading up to it, the party was a lot of fun.  For future reference, though, I'd suggest NOT leaving a fog machine unsupervised with a bunch of 8-10 year olds.  We were all sitting around the bonfire when we looked into the house and saw that it was filled with smoke.
Labels: costumes Halloween Halloween treats zombies