One of the great things about being a teacher (besides the joy of molding young minds, being adored by a roomful of first graders, and having such an impact on the future, of course) is being off for holidays.  Our holiday schedule has been pretty thin this year, though...no Veteran's Day? No Pulaski Day? I know most everyone without a teaching job is rolling their eyes and muttering about 6 hour workdays and such (don't get me started), but teaching can be a high-stress job (certainly is this semester) and some of those "extra" days off are all that stand between me an a nervous breakdown (or at least a bottle of wine).  Because of this, even though we were just off last Monday for President's Day, the two snow days we had Thursday and Friday were kind of a godsend.

I can't blame my stress level on lack of exercise.  I've been staying pretty consistent with getting in workouts.  Right now I've got two goal races I'm training for.  There's the 5K I'm hoping to PR (aiming for sub-25 min) in April.  I know I've mentioned before that usually once I've run a distance I lose almost all motivation to actually train for it. This is the first time I've ever had a pace goal, though, other than my secret, pie-in-the-sky goal for my first half marathon, and the only time the pace has been my primary goal.  It's kind of exciting.  Last Saturday I ran 7.5 hilly miles, and I hit the gym Wednesday night for my scheduled speedwork run. Which, weird as it is to say, I nailed.

I also have that little 200 mile bike race looming in June.  The sting of last year's DNF hasn't worn off one bit, and it's definitely prodded me to get on the bike.  Last February I rode 62 miles total; this February I'm currently at 231.  If I can stay consistent over the next few months and get in a few century rides, I'll feel pretty good about my body's chances of finishing this year.  Of course, the weather is always a major factor, but as long as I've taken care of the things I can control, I'm content with whatever happens.  I was out of town for a wedding this weekend, but the extra snow days gave me a chance to get in a few extra miles on the trainer.  While I'd far prefer to ride outside, it's a lot easier to stagger downstairs in the morning to put in 30-60 min on the trainer before work or to ride while watching a movie with my son.

Of course no snow day would be complete without some snow play. We built a fort, threw snowballs, and (my favorite) went for a snow hike.

We hiked about two miles, with J and the dog running all the downhills.  I may run regularly, but that kid can easily outsprint me (in boots, even!), plus he's braver running down snow-covered hills.  We had a blast, including a dog-assisted slide down suicide hill.  The only disappointment was when we realized he forgot to try peeing his name in the snow.  Next time, for sure.

The highlight of the weekend, though, had to be my Team Virtus teammate Bob's wedding.  Since we usually all spend time together in races or long rides (or occasional bachelor parties), it was funny to all be in the same place all dressed up.

Even though I wasn't in a sweaty jersey and argyle knee socks, I was still rocking my characteristic braids, with a twist.

I can't even tell you what a wonderful night it was.  My teammates and their families have definitely become like family to me, plus there were so many other good friends there too.  And a great time was had by all, even my husband and 9-year old son. 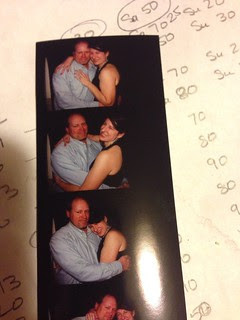 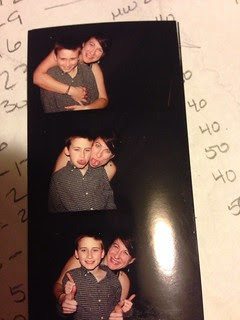