I'd been looking forward to this past weekend for ages. I had fun outdoor plans both days, and the meteorologists were forecasting glorious weather for Saturday, a high of 63 and sunny. While we haven't had a terribly cold winter, there's been a dearth of sunshine lately and the recent cold weather has left me hungry for spring. I felt almost giddy at the thought of the great run ahead of me. Imagine my disappointment, then, when I woke up, checked the weather, and saw an hourly forecast full of rain and 40's.

I'd never met my running partner, the friend of a friend, in person, but he's Facebook-known me long enough to be unsurprised by the meteorological about-face.

The thing about referring to events like a rain-soaked nighttime trail half marathon as "gloriously terrible" is that you really can't bail on a run because of bad weather. Granted, I've run in the rain enough to know that it's usually kind of fun, but it seems like I need to keep learning that lesson.  I headed west, met up with Mickey, and headed to the park and some of the worst trail conditions I've seen since my first go at Pere Marquette (pretty sure Sunday's Quivering Quads half marathon eclipsed that from everything I've heard).

There were some perks to the sloppy trails and constant rain.  First, of course, was that they brought my much faster partner closer to my pace (and then he was nice enough to slow down the rest of the way so I could keep up).  It also gave us the opportunity to smooth over horse damage.  Best of all, though, was that in many places the going was hilariously bad.  All you could do was laugh at how ridiculous it was.  The rain I'd been whining about was no problem; the (40ish) temperature was only chilly in open areas and about perfect on the trails.  Making way through the mud and some early snowy patches was tough going, though, and it was doing a number on my hip.  Instead of the 8-10 miles I had in mind, I begged off at about 6, and when the opportunity arose we took the road back to the parking lot.

Very fun morning and, given the all-day rain predicted for Sunday's bike adventure, a much-needed reminder that wet weather doesn't preclude having fun outside.  I needed that encouragement, too, because while I kind of like running in the rain, I've never liked riding in the rain.  On my brand new bike, no less.


Any hopes that the forecasters would go 0 - 2 and also be wrong about Sunday's forecast were dashed when the first raindrops hit my windshield as I pulled onto the interstate bright and early that morning. Oh, well.  I knew Chuck, Lori, Patrick, Robin, and Russ weren't staying home, so I couldn't either.  We took our best guess as to what to wear, took a group picture, and headed down the Hamburg Trail.

Soggy conditions would have ruined any scheduled mountain biking, but as luck would have it we'd planned a gravel ride.  The Weldon Spring Conservation Area used to be home to a variety of small communities before the federal government took over 17,000+ acres during WWII for a munitions plant (more info).  Remnants of these communities can still be found along trails and buried in the woods. Chuck had found out and plotted the locations of a bunch of old cemeteries which we hoped to find via bike and hiking.

We started off with bike shoes in our packs since the first few cemeteries were not far down the trail.  Riding in the rain, not clipped in, on a new bike made me a little tentative in the beginning, so I was glad we were starting on nice smooth gravel.  Despite the steady rain, the temperature (around 50) felt pretty comfortable.  We found the first few cemeteries with no problems.

After finding the first three cemeteries, we had a short hike back up the Hamburg Trail to pick up our bikes.


Next we hopped onto a new trail, a skinny stretch of bigger gravel that seemed to go downhill forever (which is a good thing if you like riding downhill.  Or fast.  Neither of which I do.) punctuated by occasional logs.

Stopped at another cemetery on the way...


We popped out onto the Katy Trail and rode down to the entry point for another small cemetery.  Despite the ridiculously wet conditions, the trail was still nice and hard.

Turned off the Katy back into Lost Valley...

Hiked and then climbed a hill to another cemetery... 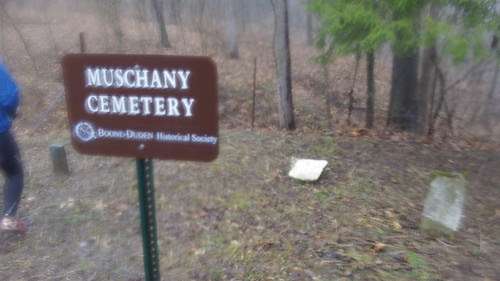 Back onto the double track...

I've ridden and run at Lost Valley quite a few times, but it's funny how much stuff is out there that I never really took note of...crumbling foundations, rusted fire hydrants, old roads and such.  It was fun to be on a ride where the purpose was to look for those things you never notice.  Turning off the doubletrack in search of one of those old roads, we came across a clearing filled with bones.  Kind of creepy, kind of cool.  Lots of Chupacabra jokes and bad puns (most of the latter from Patrick). 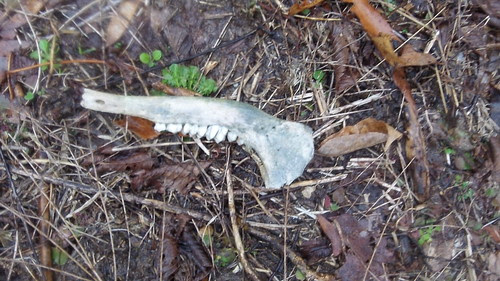 We set off down what was left of the road in search of one more cemetery, but we did more talking and enjoying the company than paying attention to the map and didn't find it.  We'd been out for close to 5 hours in nonstop rain, and we were having fun, but the chill was definitely starting to set in.  Chuck suggested going back towards where we started and trying again while paying attention to the terrain.  No one disagreed, but the growing amount of quiet led him to suggest maybe we should save this for another time and head back to the cars.


We had one last big downhill, and I pretty much crept down, chicken as usual and particularly unsure about riding the big gravel on my little tires.  This highlights the biggest issue I'm going to have with my new bike or, indeed, any bike.  It'll only go as fast as I'm willing to ride it, so I really need to buck up and stop being such a wimp.  In my defense, this is our "getting to know you" phase and it'll take some adjusting to get used to riding rougher terrain in a different position.  That said, I'll likely be wimpy next time, too.

The uphill out of Lost Valley reminded me that I no longer have a granny gear, so I was walking much earlier than usual.  At least this bike is lighter to push than my mountain bike, but one of my goals for this summer is going to be to ride out of Lost Valley on the cross bike. 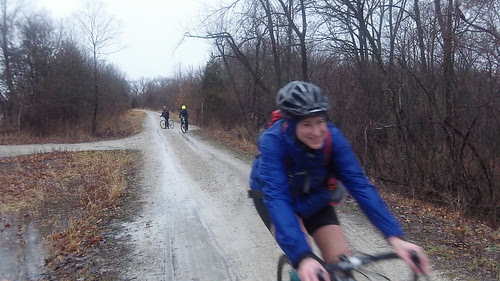 So far I'm very happy with my new bike.  It fits perfectly, got through this crazy day with no mechanical issues of any kind, and handled great.  Granted, upshifting with the SRAM shifters is still a work in progress and I'm going to have to get stronger if I want that bigger front cog to regularly be anything more than decorative, but I'm looking forward to the process.

How did all this fit into my Dirty Kanza training plan?  Not at all, really.  The nature of our quest meant that overall we logged relatively few miles in a longish time.  If I was smarter more dedicated to my plan I'd probably have stayed home and logged my 70 miles on the trainer, but I wouldn't have wanted to miss our Graveyard Gravel Grinder.  All in all, it was a fantastic day.  An awesome weekend, really.  While we missed the people who couldn't make it, it's pretty great to have such fun friends and cool opportunities around me... and if there's an upside to not being particularly sweet it's definitely that I'm not going to melt in a little rain.
Labels: airborne delta cx gravel graveyard gravel grinder Lost Valley mud rain trails Weldon Spring