Saturday morning I was supposed to meet some friends and carpool to Rolla, MO, for 100 miles of gravel roads (in two 50-mile loops).  That's exactly the kind of training I need in preparation for June's Dirty Kanza (exactly 2 months from today...yikes), but I ended up skipping out on the ride.  As Saturday got closer, the forecast for Rolla showed rain earlier and earlier with temps in the low 50's at best.  While I'm certainly not going to melt, I'm just over the cold right now, and the possiblity of spending 50 miles soaked (rain was supposed to hit about halfway through) was unappealing at best.  Also, Rolla's about 2 hours from my house, which was going to necessitate a 4:30 wake-up call.  Totally worth it for good conditions, but a tough sell to myself after a late night and an iffy forecast.

Weather and sleep deprivation weren't the only factors in my change of plans, though.  My last long ride really shook my confidence.  After struggling through 60 miles, I was nervous about trying to ride 100 with a group of stronger riders.  I also wanted to ride without a pack in the hopes that my (way too heavy) pack had been part of the problem with my back on the 60-miler.  Since the majority of my "bike gear" is the same stuff I wear to run and race and wear around the house, it's not easily packable if I decide to shed a layer.  Riding loops from home solved that problem.  Finally, I'd started antibiotics on Friday for a UTI, and both the infection and the cure were making me feel lousy.  I still held off from messaging the group until early Saturday morning because I knew that I'd hate myself if the weather changed and I missed out on a much better ride than what I'd do on my own, but the forecast was even worse at 4:30 a.m. than it had been the previous night.  Decision made, I texted my friends and went back to sleep with a touch of relief and a little less respect for myself.

I didn't end up getting started Saturday morning until 9, and I set off with little enthusiasm.  Solo rides on paved bike trails are pretty boring.  Since Jeff had helped me replace my cross bike's saddle with the good one off my mountain bike (in the hopes that the saddle issue was another contributor to the last bad long ride), I planned to start with a 10-mile loop in case adjustments needed to be made.  Instead, I accidentally stayed straight on the path to a 17-mile loop, but since the saddle seemed right I just kept on that way.

The first loop went well, and I was going to stop by the house for more water/food/bathroom stop, but we have a really nice new(ish) bathroom at a trailhead, so I stopped there and then hit the 10-mile loop (The there and back adds about 2 miles; my husband always gets irritated with me when I suggest a 10 mile ride that's actually 12 :D).

I stopped back at my house still feeling ok with 30 miles down.  My MawMaw hip (which my doctor tells me is actually my gluteus minimus giving me trouble) was a little achy but not bad, and I did some stretching when I stopped.  After a too-long break I set out on a 36ish mile out-and-back with a midpoint where I could grab a slice of pizza, something I was very much looking forward to. 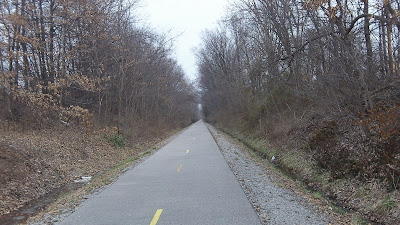 The first stretch of this trail I've ridden and run quite a bit, and while we had ~10 mph winds blowing the trees provide some protection. Once you hit Hamel, though, the scenery deteriorates. 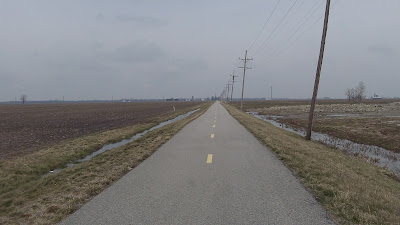 Not much shelter from the wind or distraction from the boredom.  At least I had pizza to look forward to.  I made it to Staunton (home of the Tour de Donut!) and savored every bite of my lunch.

﻿ ﻿I had this treat along, too.  A couple of the guys discovered the Go-Power of the mocha back on our October Monster ride, and I thought it was worth a try.  I don't know if it really made a difference on my return trip, but it sure tasted good.  With a headwind pretty much the whole way back, I switched my music to a playlist full of Mountain Bike Radio podcasts (my new favorite thing), put my head down, and pushed through it.  After all, DK200 is known for its wind.  Good training, right? Well, except the Kansas wind is more like the hot breath of Satan, as Bob put it last year.

I got home with 71 miles on my Garmin and fought with myself about go/not go.  Nathan's girlfriend was on the way over and wanted to see me (she'd brought me flowers for Easter, sweet girl :D), so I waited and talked to them for a while.  When I finally got going again, I made it a block or so before rain started falling.  Instead of 10-12 miles in the rain, I rode a short road loop with some rolling hills and called it good at 74.5 miles for the day.  I never felt fantastic, but I never felt terrible, and I ended my day feeling much better about my training.  Still, as I mentioned on facebook, 75 miles isn't much past the first DK200 checkpoint, and those aren't paved miles.  I definitely have a ways to go in the next two months.
Labels: airborne delta cx Dirty Kanza 200 DK200 training I love pizza long ride MCT trails mountain bike radio starbucks mocha for fuel