Sometime towards the end of May, a friend suggested the Firecracker Run to me. I think his exact words were something like, "You like hilly races...I'm not sure it's far enough away for you, though." My last official 10k was in October 2010, I'm not big on running on the road, and I'd passed on a recent local 10k, so why would I make the 2-hour round trip for a 6-mile race where, due to a virtual running hiatus, I was likely to have a disappointing result? There's really no good reason to, so of course I signed up for the race.

After April's Ava Brown Memorial 5k (which I actually did train for), I took a break from running to focus on Dirty Kanza training. Thanks to a disappointingly short ride there, I actually felt good afterwards and did two 6-mile trail runs with friends the following week. I was glad to have the race on my schedule to motivate me to go run. Things went downhill from there, though. I've lacked the discipline to get up early and run on my own, and life got in the way of most of the other runs I'd planned with friends. I managed a couple 2-mile runs in the neighborhood and one 3.5 mi loop with a few hills, but none of them were particularly confidence-inspiring. Where in April I'd been pretty comfortably running miles in the 8:30's, I've been struggling to stay under 10 and to "stick out" two mile runs. My basic running goal is to be in good enough shape to run a half marathon on a whim (not necessarily well, but to get through it), and I'm so not there.

My expectations for my Firecracker performance were pretty low; I thought I likely wouldn't finish under an hour and looked at it like a training run. I only had one friend who ended up running the race, and since he does crazy things like actually warming up I knew I wouldn't see him until the finish. I got through packet pickup in plenty of time to take my race shirt back to the car and visit the bathrooms twice. The start and finish were at the River City Rascals ballpark, so it was kind of the holy grail of race bathrooms...no line for a room lined with flush toilets! Since it was a holiday race there were plenty of people in red, white, and blue. Some took it further with star spangled headbands or patriotic tutus. I had on a blue shirt, but the real festive touch was on my legs. 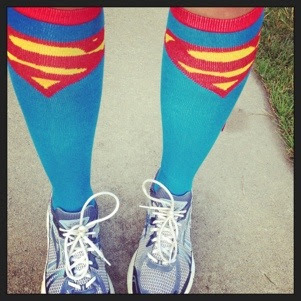 My sister-in -law gave me these awesome socks for my birthday. They even have little capes on the back!

Because of my low expectations for the race and not really paying attention, I ended up lining up too far back and had to pass quite a few walkers at the start. While it was a bit crowded back there, it was also nice to be passing people. :) Since I hadn't warmed up, I just focused on running a comfortable pace and was surprised when my first mile chimed in at 8:48. The next two miles had a gentle hill or two but still felt good at 9:04 and 9:01. I was starting to do the math and feel a little hopeful for a PR (under 58:xx). Then the wheels fell off.

Mile 3 ended with an uphill, and I'd pushed a little to finish that mile strong. From then on I started to feel breakfast come back up. I never threw up, just felt like I could. I'm sure having run more than 3 miles recently would have helped the second half feel better, too. Mile 4 ("just 2 miles left...anyone can run 2 miles...") was 9:25, and a guy pushing a double jogging stroller passed me. Mile 5 ("just 1 mile left...anyone can run 1 mile...") was 9:47, and a woman pushing a jogging stroller passed me. Luckily, the back half of the race also had two sections where you passed racers going the other way. Cheering for other people always makes me feel better when I'm running.

The last mile ("oh, thank goodness, there's the sports complex, it's almost over...") was 9:18. The race finished in the stadium with runners crossing home base. I had a little mental battle as I ran into the stadium between passing/not passing other people. It seemed a little silly to sprint when I'd dragged through the last couple miles. Then again, it was a race. I should have decided to speed up sooner, because the lady who crossed ahead of me took forever standing in front if the photographer, so I'm sure there's no picture of me crossing home plate. Boo. My finishing time, though? A semi-miraculous 56:19...a PR by over 2 minutes. This of course once again leaves me wondering how well I might do if I really trained for something, my eternal question.

I had a while to catch my breath before changing and getting my bike out of the car for a post-race ride. My poor road bike has been languishing in the basement since the weather got nice enough to ride outside. With the Tour de Donut coming up I've been thinking I ought to get it out on the road at least once, so the invitation to join a group ride was welcome. Any new group is a nerve-wracking situation for me, but the opportunity to ride, the additional justification for my drive, and (most especially) the assurance I could keep up convinced me not to be an antisocial wimp.

After months of gravel and burly touring tires, cruising down pavement on my light bike with its tiny, smooth tires was pretty glorious. Even the hills on the first part of the loop felt easy. It was a friendly group, too, so even though I only knew one person I got to talk to most everyone as we rode. I felt fantastic for the first 18 or so miles. As we rode, a minivan pulled up next to us.

"Excuse me, ma'am," said a woman's voice. I turned to see Chuck and Lori. Too funny to run into friends while our on a ride. After catching up briefly and doing introductions, we went our separate ways. Either the pace got faster towards the end or I was just tired, but I was definitely having a harder time keeping up during the last few miles. Still, spending my morning doing a 10k run, a 25 mile bike ride, and leaving with plenty of energy to go play sand volleyball is a pretty good start to the holiday.
Labels: 10K race report road bike running