Skip to main content
Labels
Posted by Kate Geisen May 28, 2014

Right now my brain is just one big ticker tape of Dirty Kanza-related obsessiveness.  To-do lists colliding with plans for the checkpoints interrupted by forecast-checking.  I fall asleep calculating paces in my head...If I average 12.5 mph and keep my transitions super quick, I'll finish in around 16+ hours....If I average 12 mph...if I average 11 mph...I don't usually get past that point before I'm out.  There's a "Racing the Sun" award for those who finish before sunset; that isn't even on my radar.  Instead, I joke in all seriousness that I'm racing the sunrise.  I have a history of failure at this race.

In 2012 I registered at the last minute and went into the race comically unprepared.  Despite following the sub-stellar advice in my own Complete Idiot's Guide to Dirty Kanza, I made it a surprising 160 miles before falling, hurting my knee, quitting, and spending a year regretting the way I'd left the second CP with no real intentions of going far and thus sealing the DNF that had been likely but not certain.

In 2013, I signed up the moment online registration opened and did much better with my training (for example, I actually rode on gravel and hills).  Last year's distractions included a little throw-down over the family vacation that my in-laws planned during a time frame that included DK (after multiple tense "discussions", full-on arguments, and some tears, Jeff and Jacob went to Colorado while I headed to Kansas);  a little emergency surgery for Nathan; and the tornadoes that pummeled my town -- where my 3-days post surgery son was home alone -- while I watched helplessly from my hotel room in Emporia.  It was an inauspicious lead-up to a race that was derailed by Kansas winds and my disappointing lack of mental toughness, ending in my second DK DNF.

I swore off Kansas on my bike that day, but less than 24 hours later I was reconsidering.  Honestly, I haven't stopped thinking about DK since last year, and anyone who's read my blog over the last few months knows what happened: I signed up as soon as registration opened, and I've been training my ass off all year long.

Thank goodness for like-minded friends. Thanks to Mickey, Chuck, Lori, Bob, Dave, Aaron, Adam, and Jim, I've ridden very few of my training miles alone, and having stronger training partners has definitely made me a better rider. 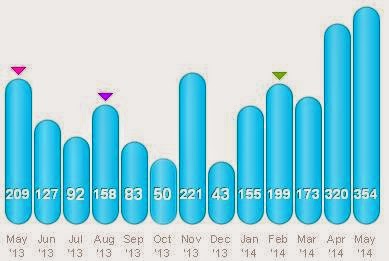 I've ridden 1,200 miles since January first. This winter was a little ridiculous, but very few of those miles were spent on the trainer.  We rode in sub-freezing temperatures, we rode in snow.  We rode on surprisingly glorious January days warm enough for shorts and on a day that my shoe covers literally froze solid and my derailleur iced over.  We rode singletrack and a lot of gravel.  We rode hills until every subsequent incline seemed like a personal insult.  I rode three of the four big mid-Missouri gravel races: Tour of Hermann, Cedar Cross, and the Hairy Hundred.

Is it enough? I don't know.  I have friends who ride more miles in a month than I have in 2014.  But I'm not the same rider I was a year ago.  I know what works for me nutritionally.  I'm a little faster and slightly lighter, stronger on uphills, braver on downhills, and more confident on gravel.  And I have two straight DNFs that chafe like a sandpaper chamois.


Anything can happen in Kansas.  Like falling in the dark, twisting a knee, and quitting. Like flat tires and catastrophic mechanicals.  Like getting lost.  Like terrible storms or the notorious Kansas winds or ridiculous heat.  200 miles is a long way, and you just never know.