When Jim Davis started talking about holding a 100-mile, point-to-point mountain bike race entirely on the singletrack of the Ozark Trail, I figured it might well go the way of my ideas.  "Hey, this would be cool....squirrel!"  Instead, he set a date, conscripted his wife into finding a bazillion awesome sponsors and volunteers, spent a crazy amount of time clearing trail, and the inaugural OT100 mountain bike race went down September 6.  I thought for about 47 seconds about registering, but after spending my post-Kanza summer largely off the bike, I opted to stay home.

And then Bob went and volunteered Team Virtus to cover the bike drop and help out at CP4.  With my weekend largely free (though I'd miss Jacob's first football game), the opportunity to hang out with my teammates, cheer on my friends who were racing, and still be a small part of the race were irresistible. As an added benefit, I approached race weekend with zero stress except for the self-inflicted pressure of baking about 20 dozen cookies for the checkpoint.

Driving to the bike drop was a bit of an adventure.  I managed to screw up the Google maps directions I'd printed out (helpful hint: "continue onto NN" does not mean "take an exceedingly sharp left turn onto NN") and took a highly scenic route.  The area is lacking in reliable cell signal, so my phone was no help, and "gravel road in the middle of BFE" was not specific enough for the GPS.  I finally made my way there with the help of the 13 year old road map lying on the floor of my car.

Most of the work at the bike drop was long over by the time I got there, so I just hung out for the rest of the evening.  After admiring the lightning show for a while, I opted to put my tent beneath one of the canopies set up for check-in.  That was a good move: it poured for about 4 hours after we all went to bed, and my tent stayed nice and dry.

We were all up in plenty of time before the buses started dropping off racers for the start, so we basically tried to stay out of the way as everyone took care of last-minute prep.  It was awesome to get to wish my friends luck in person, and it was pretty cool that a couple of people asked me if I was racing.  Despite knowing the race was way over my head, it's still nice that people might expect me to do it.

Jim played the National Anthem, said a few words, and then the racers rolled off to the start while Bob, Travis, and I jumped into the truck to go help stop traffic at the road crossing ~2 miles down the course.  It was pretty amazing how far the pack spread out in just a couple miles. 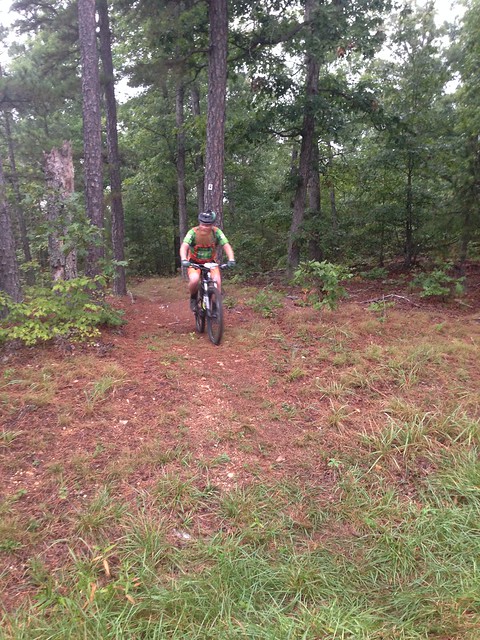 Loved getting to cheer on some friends as they passed by. After packing up our tents/hammocks and loading the CP4 drop bags into Travis's truck, we all caravanned to the Bixby Country Store for some delicious biscuits and gravy. Breakfast handled, we drove to the Berryman Campground, site of CP4, to set up camp and maybe ride some trails.


The CP opened at 12:35, though the leaders weren't expected until around 3.  Of course, in typical Virtus fashion we didn't get around to riding until darn close to that.  Since Rte 66 Bicycles was in charge of the CP and didn't seem to need our help, we headed off for a short trail ride.

In a rare treat, Bob's wife Cara and our friend Emma both rode along with us. Travis, perhaps encouraged by my earlier smack talk (which I utterly failed to back up), set a pretty strong pace which I was totally unable to match.  I can keep up pretty well on road or gravel, but on downhill-ish singletrack I'm really limited by my cowardice lack of confidence.  My slower speed was still fast for me, though, and I was having a blast. We all were. Every time we stopped to regroup, we had huge smiles on our faces.  The high point for me was bunny hopping a fallen tree (a small one) and clearing it with both tires, the first time I've managed something like that.

We hadn't been out long when the race leader passed us on the trail. Over 80 miles into the race, Dwayne flew by with a huge smile on his face, looking like he was out for a (fast) pleasure cruise.  Not wanting to be in the way, we cut out on the first fire road we reached, and we got to watch second place fly by from there.

The fire road ride was fun.  It turned into an impromptu intra-team drag race, and though I haven't yet managed to time an attack so that I can maintain my lead, Travis and I hit the gravel at about the same time, wearing the biggest grins ever.

Since nobody needed our help at the CP, we were free to relax for the rest of the day.  Bob had brought his grill/smoker and BBQ'd a ton of meat, and while dinner cooked I bounced between hanging out at our campsite, walking around talking to people who were there crewing or had DNF'd due to mechanicals or injury, and stalking the CP tent on watch for friends who were racing.  I didn't catch all of them, but I got to see quite a few and was blown away by how good they looked after 80 miles of singletrack.  So impressive.


The rest of the evening was spent eating delicious BBQ and hanging around the fire, enjoying awesome company and perfect camping weather.  And then going to bed, bc we'd all managed around 4 hours of sleep the previous night.


Sunday morning we got up, enjoyed some baggie omelets courtesy of Travis, and very slowly got our stuff together for the sweep ride to the finish line.  When we finally set out, the trail was just as fun as on Saturday.  While I couldn't keep up, I could at least keep the guys in sight.  Seeing the tree I'd bunny hopped the day before, I smiled in anticipation, went for it, and totally blew it.

Not sure exactly what happened, but I ended up hitting the tree, landing weird, and just about getting a face full of the tree in front of me.  I landed pretty hard and just sat there for a little bit.  A week later, I'm still wearing some sweet bruises from that crash.

We got going again, but before too much longer I noticed that bumps were feeling pretty hard in the back.  Flat tire. Boo! I managed to change it myself, with a little help from Travis, and while I was slowly managing that, Dan and Sam both passed us, surprised at how little forward progress we'd made.  My crash and flat had definitely set us back, but we weren't in any hurry anyway, just out enjoying the day and the ride, clearing away the course markings whenever we came to them.

The first 15 miles were pretty awesome. Usually after crashing I get way more tentative. I did walk over some downed trees I probably would have ridden (or attempted to ride) before falling, but overall I didn't suffer a loss of confidence.  I don't remember walking much at all; I felt great and had a blast being out on the trail with Bob and Travis.


Even after the turn off of the Berryman Trail onto the Ozark Trail towards Bass the trail was fun...until it wasn't.  Somewhere around mile 15 I kind of forgot how to ride my bike. All of the sudden I was walking things I knew I could ride, things I'd have ridden earlier. Much of my confidence had evaporated without any real reason.  A couple of big climbs towards the end hurt, even walking them, and the guys had to do some major waiting on me.

By the time we made it into the finish line at Bass, I was worn out and knew two things for a fact: first, that not racing had absolutely been the right decision; and second, I really want to do this race next year.  In that vein, all I want to do right now is ride my mountain bike, which figures, because with my next big race being a 30K trail race, the bulk of my training time needs to be running.
Labels: Berryman campground Berryman Trail camping crash mountain bike race mountain biking OT100 Ozark Trail volunteering