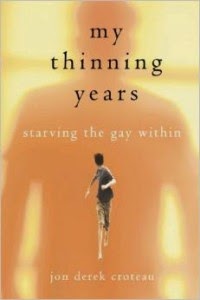 When Lisa with TLC Book Tours emailed asking if I'd be interested in reviewing this book, I almost said no because it's not a typical subject for me.  Then I thought again about the fact that one of the thing I love about books is their ability to take you new places.

Having now read My Thinning Years, I can say that I'm glad that I only experienced Jon Croteau's reality through his book. He relates his experiences growing up in a household with a stridently homophobic father, a man who sounds like he would have been a difficult parent to anyone but was a nightmare for a gay son.

Even once he was out of his parents' house, Croteau continued to struggle with his sexual identity, having largely internalized his father's homophobia. His book details how he coped (or didn't cope) and the processes by which he finally was able to accept himself.

As a straight person, this book gave me a lot of insight into how difficult not just coming out to others but also to oneself could be. As a parent, it was a sobering reminder of just how much power we have to harm our children.

You can learn more about My Thinning Years on Goodreads or buy it on Amazon.
Labels: book review Jon Croteau TLC book tours