Skip to main content
Labels
Posted by Kate Geisen May 24, 2015

Seems like my Friday Facebook news feed was filled with posts from people headed out of town to go mountain biking with their significant others. And OK, maybe "filled" is an overstatement, but where I don't envy material things (much), I'm definitely jealous of people whose significant others share their love of endurance sports...or, failing that, can at least enjoy hanging out with that group. So I was having a minor pity party (party of 1) when I saw Laura's suggestion that someone do the Creve Coeur Heartbreaker MTB race on Saturday. 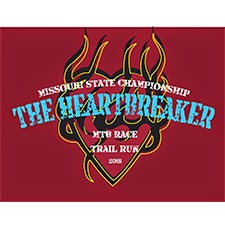 While I couldn't go out of town, a quick conversation with Jeff ascertained that I could get away for the morning and go "race" my mountain bike. With DK looming next Saturday, the last thing I want to do is get hurt, but Creve Coeur is pretty tame. Since this was to be my second mountain bike ride since Easter weekend, my goals were moderate*:

1. Avoid injury
2. Have fun
3. Get in some saddle time/mountain biking practice

*In actuality, these are always my goals, but avoid injury was moved up from the third spot in deference to Dirty Kanza.

My normal pre-race doubts surfaced Saturday morning, but I ignored them, arriving at the park with plenty of time to get registered and catch up with lots of bike friends...but not, unfortunately, to adjust the helmet I'd grabbed in place of my normal one. This will be painfully clear in every picture from the day.

Start times were staggered, with marathon, cat 3, and juniors starting at 9:30 and cat 1, cat 2, and singlespeed starting at 11.  This meant that an hour and a half into the race we were going to get passed by an onslaught of fast, fresh racers. I much prefer races where we all start at once and those way faster folks have an entire lap to spread out before passing me.

Lap 1: The Creve Coeur trails are fast and flowy, very similar to my local trails but less rooty. The first lap started with a lollipop on the road and then a trip through the grass in order to spread out the field before entering the singletrack. I managed to be not at the back as we hit the trails, which was kind of cool, and I stayed in that spot through a longish, super-fun gradual downhill that contoured along a hillside.

The downhill ended with an uphill right turn switchback that I blew and had to scramble out of the way of the people right behind me, giving up a bunch of spots in the process and ended up behind several younger riders who were awesome but slower than I'd have been going. I'm not much of a passer (having little opportunity to practice), and I was really uncomfortable trying to get around the kids on that tight trail, so I ended up spending a lot of time behind them.  But hey, if I was better at racing my bike I'd be better at passing people, too. Lap time: 40:04

Lap 2: No kids in front of me, not much of anyone in back of me. Other than once again blowing the uphill switchback as well as one later in the loop, it was a fast, smooth ride. Super fun. Lap time: (35:35).

Lap 3: The 11:00 group was getting race instructions as I passed through the start/finish area, so I hoped the announcer was long-winded enough to give me a decent head start. I caught up with Dean on the long downhill and he told me to let him know if I wanted to get around.  "That's ok, I'm about to blow that uphills switchback and don't want to get in your way," (I'm not sure why Mickey keeps telling me I need to work on my self-talk.)

"Get in your granny gear and take it wide," he coached.  This is how awesome the STL cycling community is...we're in a race, I look like an idiot with my helmet askew, and someone who's never met me is giving me pointers.  I didn't shift down far enough, but his advice got me further up the hill than I'd gone before.  We both pulled over shortly afterwards to let Roggo through on his way to crushing the men's marathon race and I guess I passed there.

Hitting the first switchback-y field section, I could see Carrie ahead of me as she completed that out and back.  I was excited, both for the opportunity to cheer for my friend and because I was that close to someone who's much stronger than me on singletrack.  Shortly after that, Renee hit one of the nasty ruts in the field and went down, giving me the opportunity to pass after making sure she was OK.

Unfortunately, right after I got back onto the trails a couple guys passing told me my saddle bag was falling off.  One of the straps had ripped, so I pulled it off the saddle, watching Renee pass me back as I rushed to stuff it into my jersey pocket.  I caught sight of her in the second field section and had almost caught up with a mile to go in the lap, when I had to pull over for about 6 minutes while what seemed like the entire cat 1/2/ss field rode by. Sigh. Lap time: (40:45)

Lap 4: This felt pretty fast but I was getting tired and it showed in my handling. I was riding sloppy, which is where I typically start clipping trees and crashing.  In addition to the two switchbacks I never successfully rode, I also pushed my bike up the hill to the second field section.

I would finish this lap in plenty of time to go out for another; both leg cramps and mental negotiations started up. The devil on my shoulder was convincing: Just hang out before the finish until 12:30. You don't want to get hurt right before DK. It's probably smarter to just quit before you get hurt. You're just out here for fun anyway, remember?  There was an opposing voice, though, one that reminded me how I've read that the real training starts once you get tired and that you don't build mental toughness by quitting: Surely you're not really talking about quitting 2.5 hours into a bike ride?

Any remaining thought I had of stopping at 4 laps was squashed when Renee headed out for her fifth as I passed through the start/finish. (Lap time: 37:06)

Lap 5: I stopped briefly to chug the Gatorade I'd left on the picnic table, hoping that it might help chase away the leg cramps, and then rode back onto the singletrack.  While I didn't let myself quit, I did back off on the intensity in the interest of staying uninjured, and I was glad I'd kept riding. It was a great course, a beautiful day, and the downhill sections were a blast. Maria passed me just before the start of the second field section, and maybe it was the sight of her that kept me from walking that field hill again.  I could see the 4th place girl ahead of me in the field but couldn't close the gap and then got close again on the switchback after the stairs but had to run it again.  I tried hard to catch her in the final grassy section before the finish line, but she stayed ahead and finished 7 seconds before I did.  Slightly disappointing, but it certainly kept the finish interesting for me.  Lap time: 38:30.

Issues, I've got 'em: Eating on the bike is always an issue for me, but most especially on singletrack. I'd hoped to remedy that some with Perpetuem in a water bottle, but unlike on gravel, reaching down and grabbing a water bottle -- even on the smooth trails at Creve Coeur -- is still really hard for me. I didn't bonk, but my nutrition was suboptimal at best.  Drinking wasn't much better. I'd gone with a Camelbak but used a smaller bladder than my normal ones; turns out the bite valve is broken and runs constantly unless closed, so grabbing a drink wasn't quite the one step process it normally is.

I lost time on those switchbacks I had to walk; that's hopefully just a matter of training and riding more.  The most annoying time waster was that stupid seat bag because I'd decided even before the race that any flats or mechanicals and I'd just walk back to the finish, so I didn't even need the bag.

Fun, I had it: The weather was fantastic, and it's hard to imagine better trail conditions. The race was well-organized, and the course was well-marked. I've had a great time with all of the gravel training we've done and don't even remotely have that "I can't wait to be done with this!" feeling, but this race makes me really excited to put in more time on my mountain bike. Also, Strava tells me that my max speed was 30.4 mph, which is almost certainly a new record for me on singletrack; it wasn't so long ago that I didn't like going that fast on my road bike!
Labels: creve coeur heartbreaker creve coeur park Momentum Racing mountain bike race race report