2016 was the ninth year the Fat Cyclist hosted his charity race, the 100 Miles of Nowhere. Basically the point is to design and ride a course where you ride 100 miles...nowhere. People have ridden it on trainers, around small parks, around circular driveways (!!). Sometimes the race is completed in installments over multiple days. Sometimes it's shorter than 100 miles. You can do it on any bike -- or many bikes.

It's truly a choose your own adventure. Fatty gives his participants lots of leeway; the main goal is to adhere to the spirit of the event while raising money for Camp Kesem, a recreational camp for kids whose parents have cancer. And the icing on the cake is that because you are the designer of your own race, you're also sure to win your division.

I've ridden plenty regular centuries, so last year when I registered for 100 Miles of Nowhere I intended to complete the race on singletrack. I had the perfect 2-mile loop picked out for my event, but weather/trail conditions never cooperated with my schedule and 100MON 2015 became my first ever DNS. I still wore the jersey. 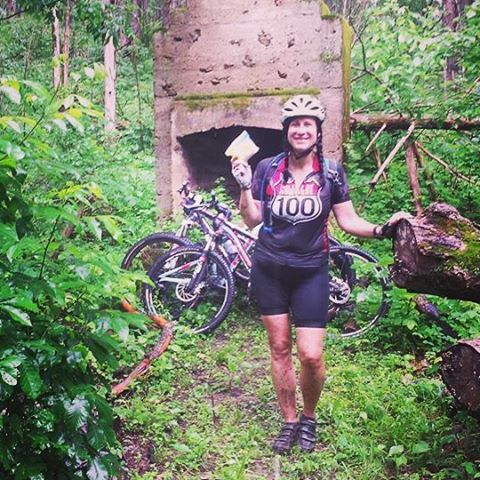 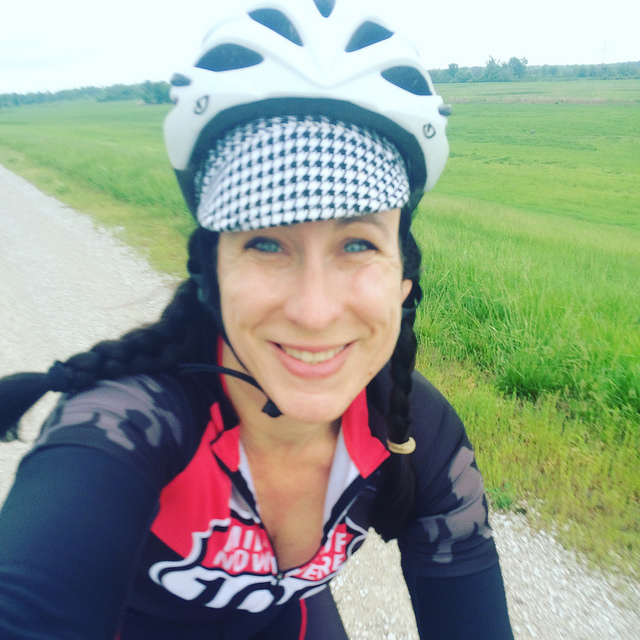 No shame in my game.


I registered again this year, both to redeem myself and because it’s such a good cause. Not having learned my lesson, I once again planned an all-trail edition. That is, I planned to plan it. The weather-dependent nature of our local singletrack makes it hard to schedule something too far ahead, and life kept getting in the way.


Luckily, our summer-like weather (82* that Thursday!) held as the calendar inched closer to December, and suddenly I realized that Sunday, November 20, was completely open.  Even a rainstorm on Friday wasn’t enough to derail the race thanks to previously dry conditions and the super windy day that followed. The wind was a double-edged sword, though, chasing in a cold front that dropped the temperature below freezing. 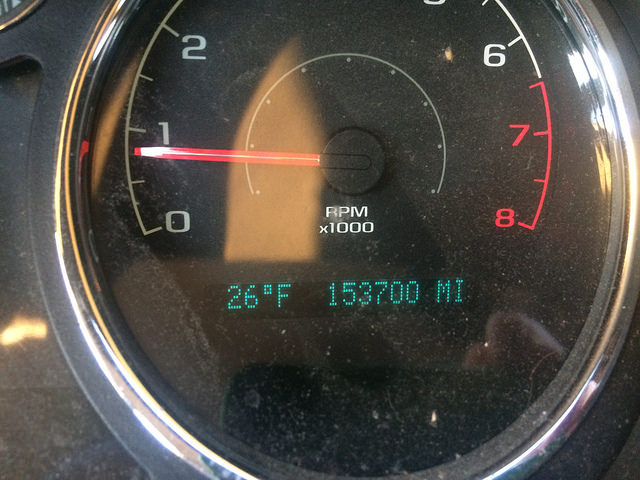 I wasn’t about to let a little cold weather stop me, though; I had a plan. A brilliant plan! Invoking the dirt to pavement multiplier, I was going to ride 33 miles on on trail 8 (1.1 mile loops) to check off the 2016 100MON. Then, I’d move to trail 3 (2 mile loops) and ride 33 miles to redeem the 2015 100MON. Finally, I’d switch to a stretch of doubletrack (not really sure of the distance, but I’d have plenty of time to find out on race day) for 33 miles of out and backs, pre-emptively winning my division for 2017. Not only would I *actually* ride 100 miles for the day and tick off my first singletrack century, but I'd triple podium.

The alarm rang at 5 a.m. on Sunday morning, plenty of time for me to eat breakfast and hit the trails by 6, thus knocking off a few miles before daylight; however, overnight I’d belatedly grown nervous about being in the woods alone in the dark, and that fear probably contributed to my slow morning and eventual 7:30 arrival. Luckily the race director was super cool about it and pushed back the start time.

I started off with my first kit and first number plate. Trail 8 is all swoopy fun. My plan was to ride 10 loops counterclockwise and then reverse directions for the next 10. Two laps in I realized that was a terrible idea and switched to a 5/5 split. After all my happy anticipation I really wasn’t enjoying myself and pondered going back home to bed. Unfortunately, I’d already posted my intentions on Facebook and had no choice but to continue. 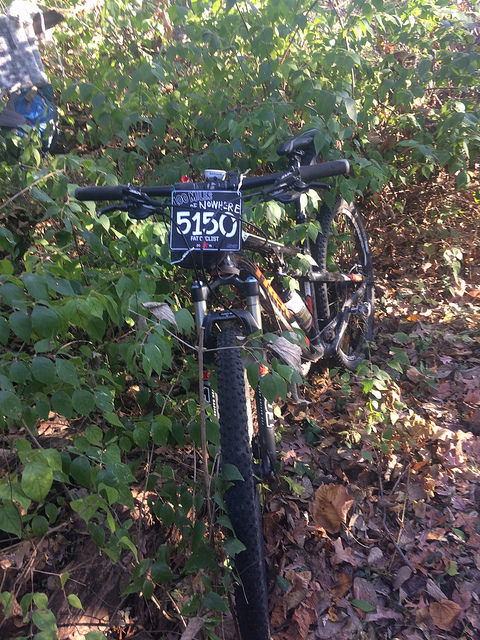 Because my family was sleeping in and watching football all day, I was racing self-supported. I stuffed my camelbak with water, food, Perpetuem, and extra clothes and then hung it in a tree at the apex of the loop. I’d ride two loops, get a drink, ride three more loops, eat something. Switch directions and repeat.

My Garmin 520 has most local strava segments enabled, which is an awesome feature for making you push yourself on shorter rides but less fun when your virtual partner keeps beating you to the finish. 8 laps in, I’d had enough of the constant beeping and stopped to disable the segments, accidentally saving the ride in the process. 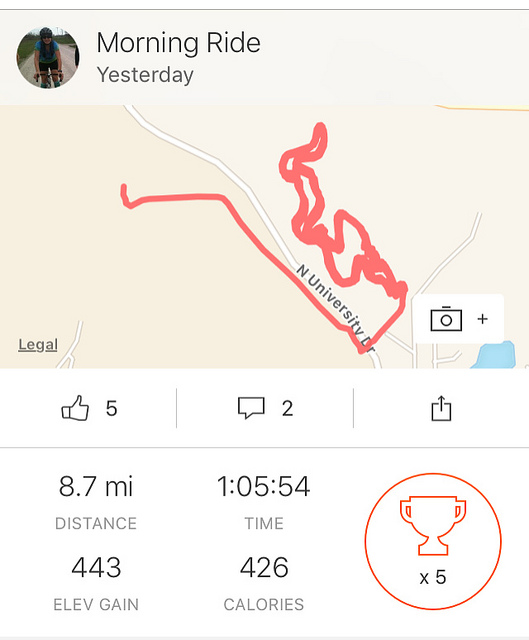 A lot of people aren’t crazy about loop courses, but I enjoy them. With my long list of mountain bike skill deficits, repeatedly riding the same thing helps my confidence. I intentionally chose the least intimidating, easiest trail possible, but trail 8 was a good place to work on taking curves with less braking, riding over a log, and carrying speed on (gentle) downhills. 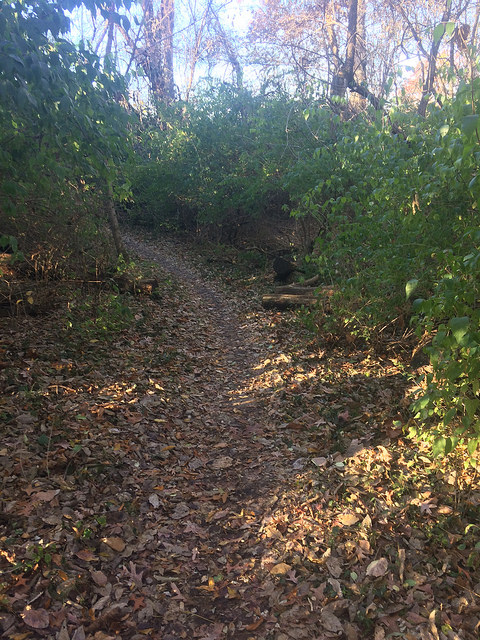 A friend joined me around 10 and we rode some laps together here and there, but mostly it was me, my bike, trail 8, and the occasional other users who were always riding in the opposite direction, leading to a few close encounters. Interestingly, riding the loop clockwise felt fastest, but riding it counterclockwise consistently yielded faster times.

Another directional difference was riding over the log. It’s bigger than what I usually attempt, but I cleared it every time. Riding it cleanly was another story. The approach was slightly different depending on direction, and I hit my chainring on it every one of my CCW runs, more of a slow-speed chainsaw-ing than anything else. Luckily that big ring serves primarily as a bashguard rather than a shifting option. 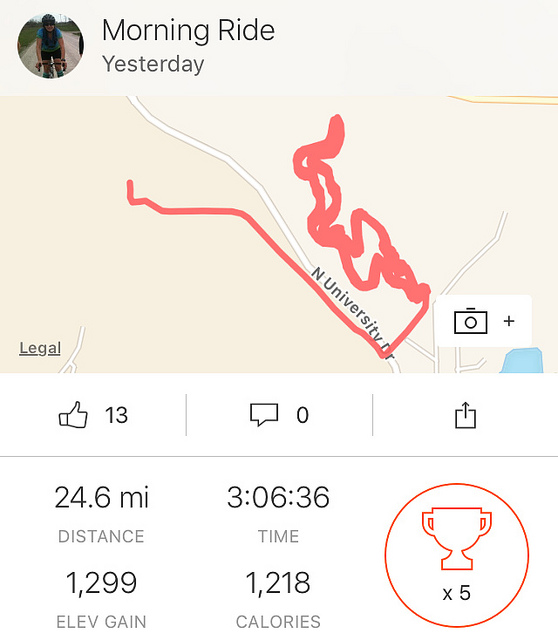 20 laps later I was finished! 33 miles down. Time to break for lunch and to thaw my frozen feet. The two pairs of socks I’d worn with my regular bike shoes were no match for the cold, and my toes felt like blocks of ice. Too bad I don’t have winter bike shoes or wool socks. Oh, wait...I do. Back home in my closet. In contrast, I’d overdone it with my top layers, which were now drenched and chilling me every time I stopped. Time for a kit change: my dry 2015 100 MON jersey was just the thing for my long-delayed 2015 race. 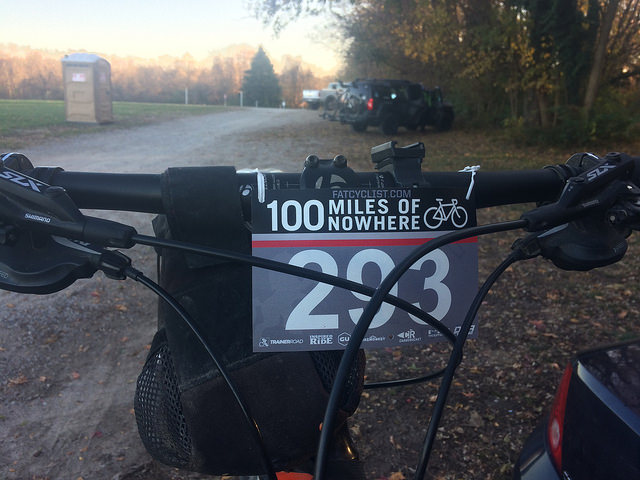 A new race called for a change of venue, so I moved to trail 3. Another loop course, it afforded me the perfect spot to hang my one-woman aid station. Regrettably, the starting point featured a climb* in either direction. When planning my day, this had been an advantage -- Awesome! I can practice my uphills! -- after 33 miles and way too many hours this practice opportunity no longer seemed like a perk.

Because this course was twice as long as trail 8, I only had to ride about 15 laps to hit my 33 mile goal. Once again I started out counter-clockwise. With fewer laps to ride, I decided on 3 counterclockwise (easier)/2 clockwise. I wasn’t sure how the latter part of that pattern would go. Both directions start with climbs, but after the initial uphill, CCW is mostly flowy and fun. Ridden in the other direction, the trail begins with a rougher, rootier incline as well as two short switchback climbs further in. I really wasn’t looking forward to these, but they ended up being a nice change of pace.

In addition to the switchbacks, which are a major target for improvement, this trail also offered a small tree to ride over; its size has never intimidated me, but the slightly diagonal position across the trail makes me nervous enough that I’ve walked it more than once in the past. After 8 successful times riding it during 100 Miles of Nowhere, I think I’m over those nerves.

But wait...I hear you ask. 8 times? I thought you had to ride 15 laps here. You're right; I can’t slip anything past you. 5 laps in, I was over it. Even the vast brilliance of my 3-in-1 plan couldn't convince me into staying on the trail even through the remainder of the 2015 leg. I eked out another 3 laps to reach 50 miles for the day and called it good enough. I didn’t complete the race, but at least I shifted my DNS to a DNF. 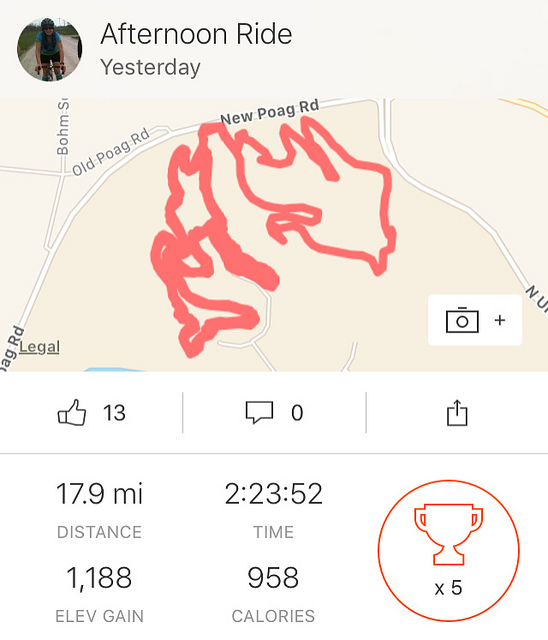 My plan for the last leg revolved around another area of weakness. Hill repeats! Both directions! Of course, by the end of my time on trail 3 the doubletrack out and back route I’d chosen sounded like the deepest circle of hell, so it was with great relief that I realized the 2017 100 Miles of Nowhere is still months away. Whew!

(But when it gets here, I’ve got my number plate ready.) 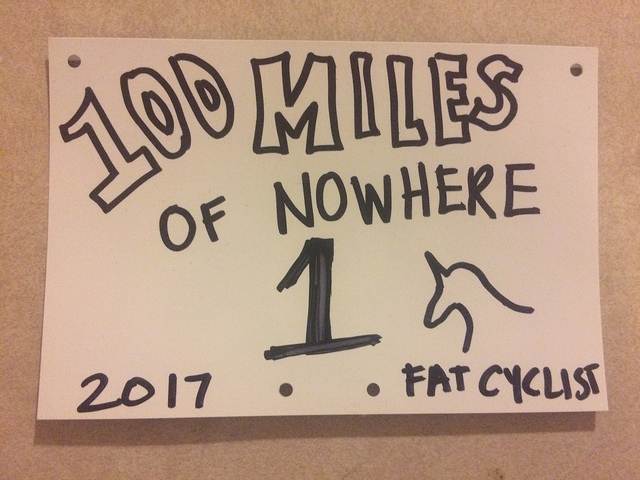 *Climb, in this context, should not be interpreted as any kind of major climb, merely that the trail wasn’t flat or downhill.
Labels: 100 miles of nowhere fat cyclist mountain biking not finishing what you start singletrack