Theoretically summer is this great time for me to do all kinds of training because, as a teacher, I'm off all summer. In reality, though I don't have to go to my teaching job, I still have that parenting gig. And while my 14 year old prefers is ok with me being gone, I don't feel right about ditching him on a regular basis, so the majority of my daytime bike riding has consisted of commute rides or hunting dinosaurs with him for Jurassic World Alive.

This week, however, he went to Holiday World with some buddies, leaving me two guilt-free days to ride to my heart's content. I immediately suggested bikepacking to a couple of friends. When neither of them bit (jobs ruin everything), I decided maybe it was time to pull up my big girl pants and do it on my own. If it was terrible, I was the only one who'd suffer for my poor decisions. Jeff, not surprisingly, did not love this plan, but I promised a nice, safe route with the likelihood of good cell service.

Back in March, Chuck and I bikepacked from Ferne Clyffe State Park to the Eastern terminus of the River to River Trail in Elizabethtown (though skipping a large portion of the R2R). For this trip, I decided to head West. 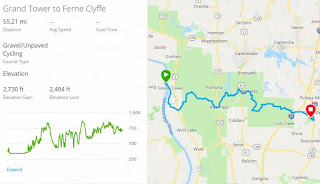 Without Chuck manning the maps, my likelihood of getting lost was infinitely bigger, so I built a route for my Garmin and made the happy discovery that Garmin connect now (and maybe before -- I've only made a couple routes there) has the option of using the openstreets maps, which show the River to River trail. On our March trip, Chuck and I played numerous rounds of "is this our turn?" It's much harder (though, as I was to learn, not impossible) to miss a turn when your GPS is telling you when you're there.

Much of the "trail" in this section is on the roads (acutal roads, not Shawnee "roads"). Another big chunk of it passes through wilderness areas, which aren't bike legal, so I chose roads as close to the trail route as possible. It's been super rainy over the last couple of weeks, so I also made a road bypass in case the bike-legal trail wasn't rideable. My route from Ferne Clyffe to Grand Tower (the trail's western terminus) was about 55 miles, which seemed eminently doable with so little actual trail.

My initial plan was to start at Ferne Clyffe (mostly since I knew where to leave my car) and ride west to Grand Tower, camping at Devil's Backbone campground. I ended up deciding to start in Grand Tower and ride east. My A plan was to ride to Ferne Clyffe (55 miles) and camp there, riding back the next day. If the trip didn't go as planned, Giant City State Park, around mile 35, was a good plan B.

The weather forecast in the days leading up to the trip made me rethink my plan. 80% chance of rain/storms and a heat warning. Not the best conditions. Maybe I should just stay home. But the other side of the scale weighed heavier:

But the big one was:

4. If you back out on this you're just going to keep backing out.