So we left a little later than planned Friday afternoon, unless you considered the fact that the original plan had been to leave Saturday morning. In that case we were very early, and though it was 5:30 by the time we started riding, there were only about 5* miles to Cedar Lake. Even with night falling sooner, we had plenty of time to make camp before dark.

(*Or, as it turned out, 7.6 miles. As part of the Kate school of half-assed planning, we also offer classes in vague mileage estimates. Sign up now...don't miss out!)

The climb out from the trailhead was much less terrible than I'd anticipated on the drive down, and then it was a short ride to Alto Pass, where we snapped a picture in front of the (in)famous Root Beer Saloon and then sailed down Cedar Street to the turn onto the singletrack.

This time around, knowing to look before the bridge instead of after as mapped on my GPS, it was super easy to spot the blazes and find the trail. The entrance was even mowed...for about 10 feet; then the trail devolved into head-high weeds.


We pushed on in the general direction signaled by my Garmin, getting a good lesson in what that little "r2r guess" on my route indicated.

This general vagueness is less of an issue once you're on clear(ish), marked(ish) trail but more of a complication when you're wandering through weeds taller than you are. Were there trail markers? I don't know...I could barely see my front wheel. I had my first fall as I walked my bike along the sideslope of a brushy hill. The situation was early enough in the trip and ridiculous enough to be entertaining, but I was already thankful for Chuck's relaxed attitude and adventurous spirit. I'm not sure how many other people would have weathered this beginning with such good grace.

Chuck: A machete would have been a good addition to our gear for this section. 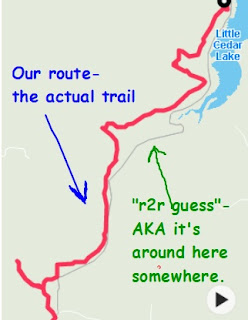 Once we waded though seas of head-high weeds and made one long uphill mistake (see that little spur at the bottom left corner of the above map? Pro tip: if the River to River gives you a choice between a well-mowed path and a brushy mess, the latter is probably the correct option), the trail actually became pretty rideable, a rarity in my R2R experience.

It took us 30 minutes to go the 4.3 miles from the Jeep to the turn onto singletrack, and that time included a stop in Alto Pass to take pictures and take advantage of cell signal to text our respective spouses before switching over to airplane mode. Once we reached the "trail", it took another 30 minutes to cover just over a half mile. Making camp in daylight no longer seemed like such a sure thing, but eventually we got to ride our bikes again.

While the trail wasn't entirely rideable, our pedal vs push ratio improved significantly once we reached the woods. The map I'd printed from rivertorivertrailhike.com showed two campsites next to Cedar Lake, and we watched for likely spots as we rode past cool rocks and places that would have been fun to explore if we weren't hemorrhaging daylight.

Eventually we had to put on headlamps. I'd brough my good one because it was the first one I'd found, but Chuck had only packed a small one since we hadn't planned to travel at night. The trail along the lake was legitimately fun to ride, but between loaded bikes and low light our speed was highly conservative.

Chuck spotted two coyotes in the woods, and while I tried to think of that as really cool it made me a little nervous.

Chuck: The coyotes were really cool, and probably the closest I've ever been to a wild one. The few seconds of direct eye contact before they disappeared off the side of the trail had me wondering what they thought of our spectacle.

We kept riding, eventually turning onto doubletrack and riding across an earthen dam between the lakes. With full dark and no good campsite in sight, we threw our tents down in the weeds and made the best of things. Instead of the Mountain House meal I'd brought for dinner, I avoided the bugs and ate a gigantic cinnamon roll in my tent.

After that healthy meal I changed out of my sweat-soaked bike gear and into shorts and a dry top, making the discovery that my long-sleeved base layer was back home with my sleeping gear. Luckily I had a small pillow, soft ground, and a cozy tarp to curl up in. I laid in my tent listening as the rising wind ushered in lower temps and eventually the rain, and I fell asleep wondering what adventures the next day would bring.