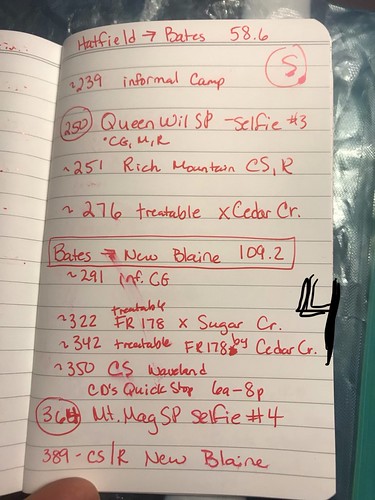 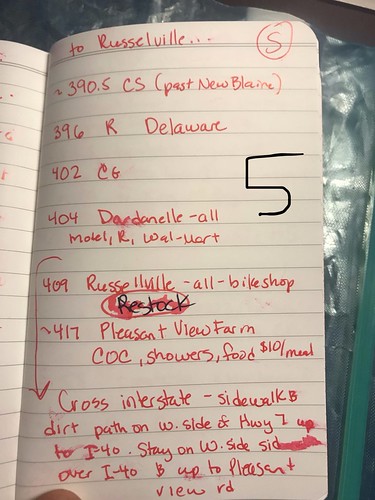 Morning Facebook post: "If you’re going to have a complete emotional breakdown, apparently Facebook and Waveland, AR, are the place to do it. Thank you SO MUCH for all the support and love. I can’t even tell you what it meant to me last night and this morning with all the understanding, encouraging, and uplifting comments constantly rolling in...


Today is a new day with services every 20 miles or so. I’m aiming for Dardanelle or Russellville, and then I’ll see how I feel at the end of the day. Thanks again for all the love."

From the campground I once again rode back towards the Waveland convenience store where I'd had my little breakdown the day before. I didn't need anything since the campground hosts had fed me breakfast, but I made a quick stop to tell Chris I was continuing on.

After not quite 9 miles of cool, shady, flatness, I started climbing the paved road to Mt. Magazine, the highest point in Arkansas. And it was OK. 2,000 feet of climbing over 7 miles is a lot for this girl, but there were enough switchbacks to make it manageable. I never got off the bike, just kept ticking away the pedal strokes, and two hours later I was at the top. There was no celebration, just deep relief and gratitude. I made it, I'm still here.

I sat for awhile against the stone wall of the overlook, talked a bit to some motorcyclists from Iowa, snacked on a bag of Chex Mix. I'd lost any sense of urgency I might have had, still not committed to finishing the race and just taking things as they came.

Facebook post: "One more mountain down. Monday I felt exhilarated at getting to the top, today I just feel thankful. This is the highest point in AR, so I guess it’s all downhill from here, right? 😂😂😂😂😂😂😂😂
Eventually I got back on my bike, bypassing the visitor's center and giving back all that hard-won elevation with a screaming descent off the mountain. In fact, the next 25 miles was nearly all downhill. Once you made it to the top of the mountain, this definitely wasn't the day to quit.

I stopped at mile 22 at a great restaurant on the outskirts of Corley and had a leisurely lunch. Big meals and being gentle with myself were the order of the day. You know how you maybe tiptoe around a friend or family worker who's recently just lost their shit? Now imagine you're both the crazy person and the calm one.

So there I was, just pedaling along this beautiful road, when I crested a small rise and saw a car parked near an old church. There, waiting for me, was the race photographer. Now, I've brought up the back of many a long race and am all to familiar with the lack of attention given to the slowest riders. It makes sense, I guess. People are most interested in winners, and photographers can't be everywhere.

And yet, on a thousand mile course with me not quite at mile 400 and the eventual winner only a day from the finish line, Michael and his cameras were waiting. That meant a lot to me.

I started to tell him about my disastrous previous day, and he grabbed his video camera, so for my mild mortification and your viewing pleasure, here I am in all my awkward, filthy glory talking about the wonderful people whose kindness had kept me in the race.


Once I left Michael, it was only about 12 miles to the next stop of my food tour. I have no memory of what I ate in New Blaine, but 20 minutes later I was on my way. I reached the Dardanelle/Russellville area around 5 p.m., and after days alone on roads with few to no cars, the Russellville rush hour was moderately terrifying.

A passing driver called out to me. Familiar with the race, he asked if I was going to Carr's Chain Reaction bike shop (yes) and if I'd called to let them know I was coming (oops). He called ahead for me, and I bumbled my way to the shop. I'd been living in fear of my brakes going out. Despite not carrying the SRAM brake pads I needed (before the race I'd intended to order a set and carry them with me, but I hadn't gotten around to it), the guys there were able to McGuyver me a new front set from Shimano parts while I rested on the floor. They'd offered me a chair, but 400 miles in I had no desire to do any extra sitting.

I'm pretty sure those guys stayed after closing to work on my bike, and then they barely charged me anything. Bike fixed, bill paid, and mechanics thanked profusely, I just had another 7 or so miles to Chuck's house, where he and his lovely wife offered free cyclists' camping. "Camping", in this instance, meant sleeping in their daughter's old bedroom and combing my hair for the first time since Saturday morning.

There at the farm I reunited with Mikey, who'd been there for a few hours. Phyllis provided all you can eat meals for $10/meal, feeding us an amazing supper, dishing up the most gigantic bowls of ice cream ever, and then making breakfast sandwiches for the next day.

It felt wonderful to relax a little and let somebody else take care of me. One of the things I hadn't really understood about bikepacking is how much work it is. You ride your bike all day, then you have to figure out where you're going to find food, where you're going to sleep. There's setting up your tent and sleeping pad and repacking them the next day. If you're not somewhere with a faucet, there's water to filter. A bike to prep for tomorrow.

Of course, the less you take, the less there is to do, but I wasn't in the less is more camp. That said, I did send home a box of things from Chuck and Phyllis's house: an extra kit, a thin long-sleeved shirt, the bottle cage that kept dropping bottles, deoderant, the Garmin etrex I hadn't quite figured out... My friend Jason had told me before the race to pack light and I'd tried to do so, but it took carrying some of that dead weight 400 miles before I could accept I really didn't need it.

While we were eating his ice cream, Chuck called home and warned us not to underestimate the upcoming climbs of Pilot Knob and White Rock Mountain. Great. I'd just relaxed a little and now I had another scary day in front of me.


Evening facebook post: "71.2 miles today. One long climb up Mt. Magazine (highest point in AR) that took 2 hours, but after that there was lots of downhill and regular intervals for food. Today was more buffet line than race. My kind of day!

Today also marked the end of the south route, so I’ve officially ridden 417 miles of the race route (plus some extras to get to off-route food or campsites). Tomorrow I’m back to very limited services and challenging terrain, so don’t be surprised or worried if you don’t hear from me. The local bike shop sponsoring the race has people watching the trackers all the time and has already once sent someone out looking for a guy (who was perfectly fine, as it turned out). That’s reassuring.
For tonight, I’ve been fed an amazing supper at the race director’s house, eaten a ridiculous-sized bowl of ice cream, and am going to bed. Hoping to be in Fayetteville by Saturday if not before! 🤞
Labels: arkansas high country race bikepacking Carr's Chain Reaction mt. magazine state park