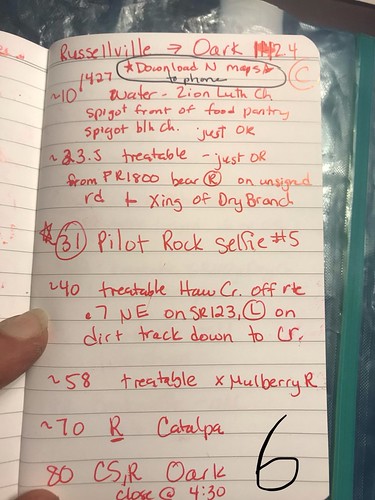 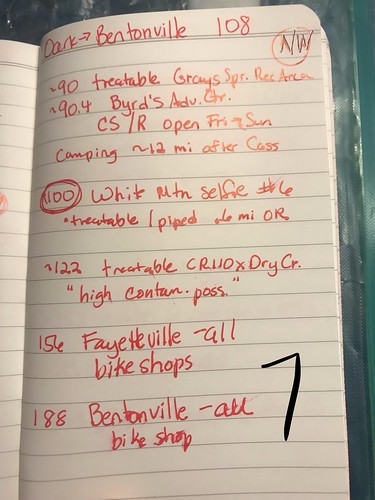 I'd intended to get and early start and woke as soon as my alarm went off but then stalled for a long time. Chuck's warning about the upcoming challenges had scared me, and I laid in bed toying with the idea of dropping from the race. 417 miles was plenty, right?

While part of me was contemplating how long it would take Jeff to drive to Russellville, another part cheerily updated Facebook and got dressed. It would be silly to stop when I wasn't even crying. Bentonville was only a few days away; I could always quit there.

Morning facebook post: Checking in before starting day 6. This one is for Sarah, Yvonne, and Carolyn. There are a couple stores on route, but you have to time it right. Water shouldn’t be a problem since I have a filter and there are sources at least every 20ish miles. People always ask, “Doesn’t your butt hurt when you ride so long?” Yes, it does. My hands are still a little numb but not much worse than on day 1, so I guess that’s good. There’s one muscle in my neck/shoulder and one in my leg that constantly bother me on the bike. I’m a little nervous about the next two days since it’s back to climbing and remote areas, but I’m trying to take heart that Phyllis (the race director’s wife) told us that before the race he said that section I already did (the train wreck day) was the hardest.

Just before leaving I noticed a spot in my bike light's wiring where bag rub had scraped through the casing. That explained its malfunction on day 3. Phyllis helped me hunt down electrical tape in Chuck's shed to at least cover the spot. With all of the stalling and Facebooking and last minute repairs it was 6:52 before I finally started. Mikey, always an early riser, was long gone.

The morning was lovely and just a little cool, and I felt like I was flying along the paved roads. "Flying", at this point, was a very relative term which Strava now indicates was about 10 mph.


The trip up to Pilot Knob started around mile 20.  I passed an opportunity to filter water since I had plenty, but I accepted a bottle from a passing motorcyclist just a bit later. It seemed silly to turn down an effortless drink. The climb was difficult but not demoralizing. I did some walking but managed a decent amount of riding as well, crossing paths with Derek, the only remaining counerclockwise racer, as he sped downhill.

The climb took 2.5 hours, and I celebrated at the top with a photo, a short break, and one of Phyllis's bacon biscuits. After all my worries, it hadn't been a big deal. I mean, it was hard, but everything was hard. It was just a big hill, certainly not worthy of the anxiety it had caused me that morning.

That long climb paid off with 9 miles of downhill, sweeping ever lower along the ridgeline while I admired the views around me. I had another water source noted at about mile 40, but not having referred back to my notes I expected to cross over it along my way. Finding the creek actually required a short detour off route, a detail I didn't catch until I was past the turn.

Despite being 6 hours into a warming day I didn't want to backtrack to find the dirt road I needed; instead I be cautious with my remaining water. I had 18 miles to the next noted reliable water source; I'd just take a sip of water each mile. Surely I had enough water left for 18 sips of water.

I turned from a short stretch of pavement onto gravel, began climbing, and almost immediately saw my sixth bear of the trip. OK, that was pretty cool, but the gradual climb over the next 10 miles wasn't. My perceived water shortage left me feeling parched, and the allotted sip of water was never enough to wash away the mild panic hovering around me. A few times I chugged long drinks in defiance of my self-rationing, guilt flavoring the fear.

By mile 48 the panic had upgraded to medium. I stopped at a cemetery in the hopes of finding a spigot: no luck. At mile 52, though, I encountered a farmer crossing the road on his tractor. I gestured across the road: "Is that your house?"

He let me fill up at the outdoor spigot and asked me about the race, having seen other cyclists passing by over the past days. "Do you ride at night?"

"Pretty brave," he answered, "with all those bears." With his accent "bears" sounded like "BAYers". I thanked him for the water and rode off.

My notes indicate Oark was at mile 80 of the route. As my water shortage would indicate, I hadn't actually used the notes much, referring instead to the ACA Bicycle Route Navigator app, once function being the ability to (accurately --  as opposed to whatever method I used to make my notes) measure the distance between points on the route. This told me that the Oark General Store was at mile 67. The store closed at 4, and it was just past 2:30. Could I cover 15 miles in less than an hour an a half? The past 5 days of data said no, but it was close enough to try.

I hadn't planned to stop in Oark, believing that there was no way I could get there by in time, and so I had enough food to get me through the next day. The sudden possibility of success made me frantic to get there; I rode harder than at any other point in the race. Thankfully, the next 15 miles was entirely downhill, and I arrived at the store 20 minutes before closing. I ripped off my helmet, grabbed my money, and practically ran in, bursting into tears of relief in the doorway.


Facebook post: If you ever see my dot hauling ass on the tracker, you can be sure I'm trying to beat a store closing time. Rode the hardest I ever have in my life and made it to the Oark Cafe 20 min before closing! 67 miles so far today. #eatallthefood

I did my best to fulfill that hashtag, starting with pie and ice cream, eating a burger and fries, and buying a BLT to go. I lingered over my meal as long as I could, checking in with home and Facebook via the wifi. The employees began cleaning up. I felt guilty about being in the way despite their kind offer to stay as long as I wanted, so I went outside and began packing up. One of the waitresses followed me out. "My boss just called and asked if 'the girl in the race' was still there. She saw your post on Facebook! She said you're like the most cheered for person in the race."

It certainly felt that way. In addition to a huge, encouraging group of friends following my progress on Facebook and Trackleaders, every day I'd see posts from strangers cheering me on. The combination of my positive experiences with the people of Arkansas, my enjoyment of the scenery, and my openness about how very hard it was made me relatable and, for some, inspirational.

But even inspirational figures need somewhere to stay the night. 5:00 seemed too early to stop, and it was too hot to sit around in a tent anyway. There was camping 16 miles away in Cass, or 35 more miles would take me to campground at the top of White Rock Mountain. My waitress friend looked at me dubiously as I told her my plan, then wished me luck as I rode away.

Ten miles in I passed Byrd's Adventure Center and its campsites: only 6:00, still too soon to call it a night. Another few miles, another campground, another decision to continue forward. All told I had twenty miles of beautiful, paved, scenic shaded downhill in which to pat myself on the back for not stopping early.

At about 6:35/mile 85 I turned onto County Rd. 1003 and began the climb up White Rock Mountain. I was able to ride just a little part of it before I began pushing my bike. The first two miles took me an hour. As the road leveled off, I saw Grays Spring Recreation Area, which I'd seen on the map and considered as a possible campsite. As the sun sank lower it looked muddy and gray and lonely and like the kind of place a hapless character becomes a horror movie victim. No thanks.


The next three miles had some climbing but a mostly downhill trend, after which the road pointed straight downward, losing 500 feet of elevation in less than two miles. Ummm...I'm supposed to be riding UP a mountain. What's this downhill doing here?

Well, it was leading into another 500 ft climb over the next 1.5 miles. For context, 100 feet per mile is a pretty hilly ride around here. So more walking. Followed by another 500 ft descent and perhaps a large amount of cursing because if I wasn't at the campground -- which I wasn't -- I still had more climbing ahead of me. And so I did...


This time it was 700 feet of climbing in less than two miles. While just arriving at the Oark Cafe (so many hours ago) had brought me to tears, I faced the mountain with grim calm. Keep moving, you'll get there eventually. It got darker. I heard music from...somewhere. I hadn't seen anyone in hours. Who else was up here and where were they? Feeling nervous, I turned on my music for the first time of the trip before deciding that I was better off paying attention to the sounds around me.

It got darker. My bike light flickered weakly as I pushed uphill, barely illuminating the road and the brush closing in from both sides. The farmer's words echoed as I listened for movement in the trees: "Pretty brave, with all those BAYers."

It was full dark when I got a brief respite from the climbing, but the road surface had changed from mostly rideable gravel to chunky rock. One mile flat enough to ride, and then another 600 feet of climbing in less than two miles. I finally staggered into the campground around 11 p.m., the final 15 miles having taken me over four hours.

Of course, the campground was totally dark, no host in sight at that late hour, and I had no idea where to go. I turned off my bike light so as not to disturb other campers and wandered through by the light of my headlamp, just looking for an unoccupied spot to set up my tent. One of the most stressful things of the trip was to arrive somewhere new in the dark. Thankfully Mikey woke and called out to me as I passed by him, and after all that time alone I finally had a friend nearby.

It was cold that night, but the combination of sleeping pad, bag liner, and emergency bivvy kept me comfortable. I fell asleep almost immediately. 100 miles and nearly 10,000 feet of climbing will wear a girl out, especially when most of that climbing happens over just 23 miles.