The Private HIM in (really unflattering) pictures

As you already know if you read my stupid preliminary race report, Sunday was my friend Mike's private half ironman.  You can check out his race report here.  It, for better or worse, has a little more detail than mine.

We started off at 11 a.m., a glorious start time that coincided with the beginning of the lap swim at the YMCA.  We ran the half mile from Mike's garage/transition area to the Y.  To save time, I just wore my swimsuit under my clothes; unfortunately, it's just a 10 year old tank suit with no chest support...not ideal for a run...so I wore a sports bra over my suit for the run.  You'll have to take my word for it, but it was quite the classy look!

Despite the fact that I only had three long swims in training, my swim went pretty well.  I felt the most comfortable yet in the water and didn't need rest between laps.  I still need to work on my turns and my breathing, but the most difficult part of the entire swim was changing into a sports bra afterwards.  I almost dislocated my shoulder trying to pull that sucker over my wet body.

Kind of funny.  That red shirt is from my first half marathon, where I met Mike for the first time.  And when I showed up at his house that morning, guess what he was wearing?

So, the swim, the part I was most worried about, went well and I felt pretty comfortable that I'd be able to finish this whole thing.  I got back to the house and switched out of my running shirt and into a bike jersey...

It was a beautiful day but still a little chilly, so I covered my ears and slipped on some arm warmers.  With my bike shoes and helmet on, I was out the door. 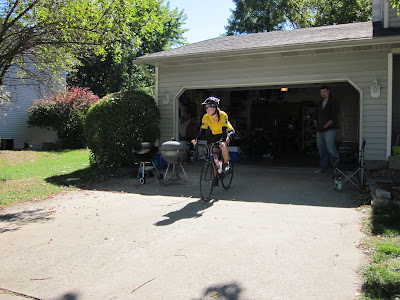 By the time I hit the end of the driveway I remembered that my front derailleur wasn't shifting.  I handled the problem with my usual aplomb.  The bike leg was fairly flat, so I figured it wouldn't be that bad.

Unfortunately, within 10 miles the chain was rubbing against the derailleur.  I wasn't sure exactly why or what that meant, but I figured it wasn't good...and I definitely didn't want to screw up my bike for a free race.  I considered calling Jeff to come and pick me up, but a) the Rams were playing and I knew he wouldn't be happy to make a 30ish minute round trip to come and retrieve me and b) I really wanted to finish the dang race.  "Luckily", I discovered that the chain didn't rub if I had the bike in the smaller rings in back.  So my chain was happier and my legs were not at all pleased.  I settled for calling Jeff and asking him to drop off my mountain bike during halftime.

So I ended up riding 26.5 miles on the road bike and 29 on the mountain bike.  Yes, it weighed twice as much as the road bike and the knobby tires aren't made for speed, but at least I could shift and not worry about screwing up my bike.  My farthest ride this year before the HIM was 33 miles, and by about mile 36 I was pretty much over the whole bike leg.  Surprisingly, my butt was fine; it was my back and knees that were hurting.  And my pride.  I knew the difference in bike was going to kill my time.  And it did.  The 29 miles on the mountain bike took me a half hour longer than the 26.5 on the road bike; even considering the time spent airing up tires and switching over water bottles, it was a big difference.

I have to say, I was thrilled to get off the bike and not at all excited about the prospect of 12.5 more miles to run (remember, we ran one mile to get to and from the Y for the swim).  "Triathlons are stupid," I announced as I rode into the garage, "Duathlons are where it's at." 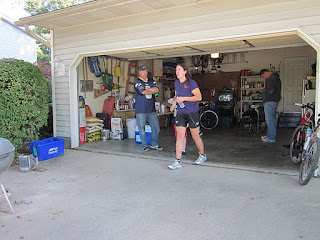 I changed socks and shoes, then threw on a different shirt and took off on my first of five 2.5 mile loops.  My knees were killing me.  12.5 miles seemed like an eternity, yet there was no way I was going to quit after suffering through that bike leg.  I ran all of the first loop (slowly), promising myself that I could walk later if I needed to.  J went with me on the second loop.  He'd brought his bike, but part of the loop was a big downhill on a road, rather than bike trail, and his bike handling skills are even worse than mine.  He also had his scooter and wanted to ride it, so I let him.  I assumed (and sort of hoped) he'd need some breaks to walk, but he kept up just fine.

His company really kept me going and distracted me from just how awful I felt.  He stayed back for the third loop and I headed out alone.  This was probably my best part of the run, and I had a brief shining moment imagining that I was getting stronger with each loop.

Not so much. Number four was awful, and the short walk breaks I intended to take stretched out as I revised my return to run spots.  My only consolation was, as I passed yards with yappy dogs, the thought that I only had to pass them one more time.  I passed my friend Lindsay's house and saw her husband and son in the yard.  "This SUCKS!" I called to them.

As I came through the aid center for the last time, Jeff told me, "Have fun!"

I may or may not have given him the look of death.  "Isn't that why you do this? Because it's fun?" he asked.

That final lap seemed to take forever, but as I got to the spot where I turned off the trail, Jeff and J were waiting for me, and J ran in to the finish with me as Jeff jogged behind us.

Finally, we crossed into the garage and I. was. done.

You can only imagine how happy I was to sit down and be finished.  I think this 8 hour race left me more drained than the 14 hour one the weekend before.

So I'm thinking that maybe next year I'll do a "real" Olympic distance triathlon.  All of the distances in that are well within my ability, and I think the training for that would be manageable.  And it would be interesting to see how I'd do if I had the proper training behind me.  I knew my training for this was pretty lousy, but I didn't realize how abysmal it was until I looked back at my Daily Mile posts from the time Mike posted about the triathlon until we did it (if you're curious, you can look below).  Ridiculous.  No wonder my knees waited til today to stop screaming at me.

How not to train for a half ironman: